Will the Milwaukee County Grounds ever be allowed to realize its enormous potential as one of Southeastern Wisconsin’s premier public parklands? Threats to the integrity of the landscape seem to be never-ending. Just when most of the pieces of the puzzle seemed to be falling into place, reconstruction of the Zoo Interchange threatens to spill over into the DNR State Forest portion of the land.

Construction on Discovery Parkway and Innovation Park began in earnest earlier this year. This is not news to anyone who has driven on Swan Boulevard through the County Grounds this summer. The steel structure of the ABB building, clearly visible from Swan, has steadily grown. Situated less visibly behind the Parks Administration building the UWM incubator also is under construction. And after months of work, excavation for Discovery Parkway has intersected with Swan.

If you’ve missed these developments, I have included some photos (of course!) below.

These changes, though attended by controversy, have been long anticipated. What has created new consternation is a proposal by the Wisconsin Department of Transportation (DOT) to use the County Grounds for its concrete crushing operations during the Zoo Interchange reconstruction. This process involves trucking tremendous loads of concrete demolition debris to a mobile crushing center and then hauling it away for recycling. If approved, the operation would occupy approximately 11 acres of land on the DNR State Forest parcel, which lies between Swan Blvd. and MMSD’s west flood basin.

The primary question is “why there?” It is like adding injury to insult. First one agency of the state, the DNR, decides to protect the land and create a Forestry Education Center (FEC) on that very site. Then another agency of the state, the DOT, decides to crush concrete there. It takes no special insight or expertise to understand that these are incompatible objectives.

John Gee, the founding director of the FEC, says that the “concrete crushing operation will make the forest unusable for educational purposes, …primarily because of the noise and dust pollution. But, also, common sense would say that kind of disturbance…will drive out a lot the wildlife.”

Gee has left his position as Executive Director due to a “disagreement with the board of directors over the scope of his authority.” Coincidence?

Understandably, perhaps, wildlife is not the primary concern of the DOT. Understandably, I hope, there are people who have been fighting for the future of the County Grounds for many years who do care deeply how something like this will impact wildlife, the forest and other natural features.

Bill Mohr, DOT Project Manager for the Zoo Interchange project, says that there are “many positives” to using the FEC site. These include being removed from residential and commercial areas—the very thing that makes it a prime candidate for green infrastructure and wildlife habitat—and the ability to work with the DNR, another state agency.

Other sites are being considered as alternatives, Mohr said in a phone conversation. But, the FEC site is the preferred one.

There is some official opposition to the proposal, fortunately. Members of the FEC board of directors assured me that this is “not a done deal.” In an email Tom Gaertner, the treasurer of the FEC board, told me, “The city has the final say on the matter.” The City of Wauwatosa must approve an application for a zoning variance if this proposal is to move forward. As yet no application has been submitted.

When I called Wauwatosa Mayor Kathy Ehley for comment she confirmed that they have not received an application from the DOT. She also said that if they do receive one she believes “the city staff will not recommend approval” of it. She added that the city is “proactively” working with the DOT to promote alternative siting of the operation.

That was welcome information, in my opinion. On the other hand, there are those who express pessimism about anyone’s chance to successfully oppose the DOT. For those who object to this proposal there is some urgency to the matter. Officials at the DOT would like to finalize the decision within a couple weeks and, to my knowledge, there is no public hearing scheduled to allow for public comment or debate on the issue. 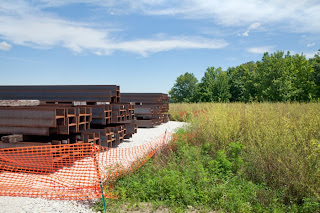 The site being proposed was used previously by the MMSD for staging during construction of the flood detention basins. In an agreement with the DNR, part of it is currently being used by the DOT to store steel beams prior to their use in the freeway project (above). 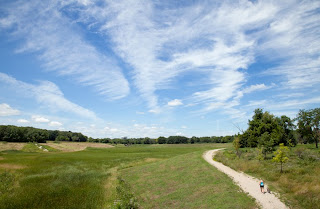 This view from Swan Boulevard shows the proposed location of the concrete crushing operation, on the left side of the photo. Wil-O-Way Woods, the heart of the DNR State Forest, is in the background. 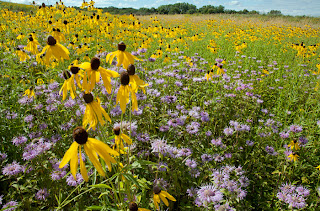 In some parts of the County Grounds, things are looking rosier. Abundant rainfall has produced a bumper crop of wildflowers in the County Park. 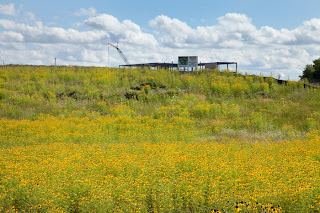 There is a new feature on the horizon, as the ABB building rises in Innovation Park. 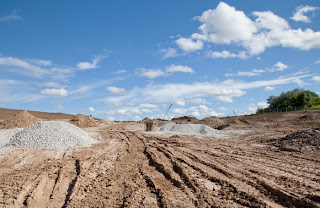 The view south from Swan Boulevard where Discovery Parkway is under construction. 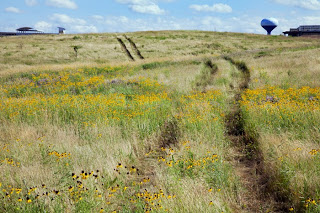 Construction vehicle tracks among the wildflowers is unwelcome collateral damage on the County Park. 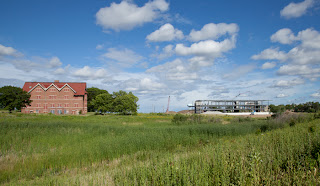 The steel framing of the ABB building contrasts with one of the dormant Eschweiler buildings, as viewed from the Monarch Trail. 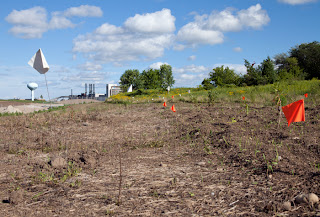 During my foray last weekend I came across three volunteers from the Friends of the Monarch Trail. They were planting native wildflowers and other prairie flora in the protected habitat zone next to Discovery Drive. The flags show where the future Monarch Trail has been staked out.
Posted by eddee at 11:59 AM