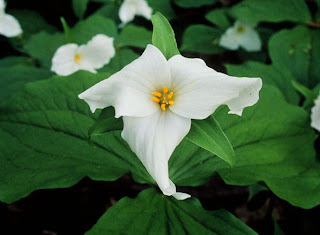 A new forestry center could add to the critical mass that has the potential to make the Milwaukee County Grounds one of Southeastern Wisconsin’s premier parklands. 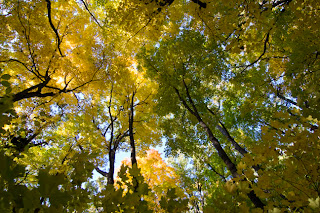 High overhead branches toss wildly about, auguring another storm. The forest is still damp from yesterday’s deluge and dark from thickly overcast skies. But despite the moaning and twisting in the canopy, down here at ground level it is calm. The foliage rustles softly all around. The forest feels protective. 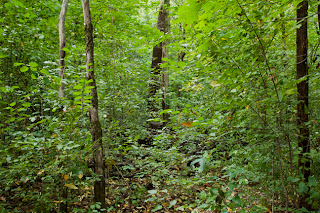 I make my way through a particularly dense patch of undergrowth, most of which is invasive buckthorn. I understand the need for management. 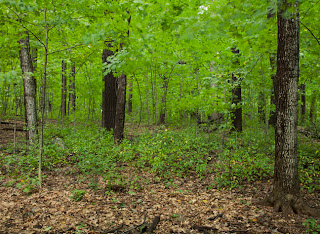 Farther along the trail the forest opens up, clear of most undergrowth. Last year’s leaves carpet the earth. A few bright yellow and red maple leaves, which turn early, accent the brown and contrast with the still intensely green woodland. 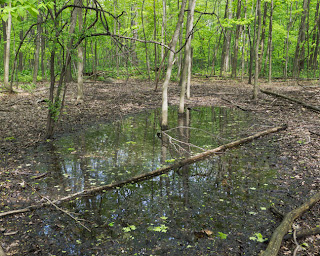 I reach the now dry depression that in spring was one of the few remaining vernal ponds, a vital habitat for many species. I understand the need for preservation. 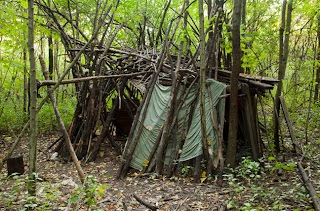 Trails interlace the forest, winding among the giant hardwoods and brushy thickets. People come here to calm their minds, uplift their spirits, experience the mystery of nature. I step off the trail into wilder woodland and come upon a clearing where someone – some group by the size of it – has built a makeshift shelter. My mental tally of youthful shelters, tree houses, and forts now numbers four. I am reminded of my own childhood. How many more hideouts are hidden in the recesses of our local forest? 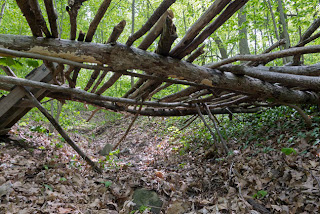 I understand the need for nearby nature that stimulates the imagination of people young and old.
Theodore Roosevelt, president and tireless advocate for nature, said, “A people without children would face a hopeless future; a country without trees is almost as helpless.” A new forestry education center, planned for this woodland on the Milwaukee County Grounds, would bring together children and trees. What a great concept!


The Forest Exploration Center’s plans for facilities and programming are ambitious. Eventually, a 60,000 sq. ft. indoor structure will be the heart of an educational complex that may include outdoor classrooms, a canopy walk/tower, and a working sawmill. 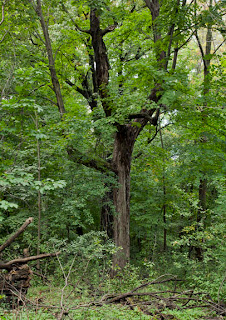 The “science-based” programming will emphasize cultural and economic aspects of forest management, according to board member Tom Gaertner, who owns a tree farm in Door County. 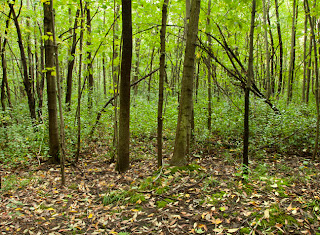 I welcome sustainable forest management. Clearing the buckthorn and other invasive species, thinning the box elders and other weedy trees would not only improve the aesthetic experience of the woodland, but also would increase biodiversity. At the same time, the perennial explorer in me hopes that enough of its wildness remains that the alluring mystery isn’t lost. 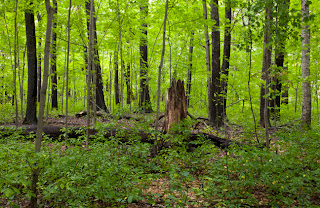 As a long-time educator – and advocate for urban wilderness – the idea of bringing school groups as well as the general public into contact with our remarkable forest is very appealing. I never tire of applauding the Urban Ecology Center, which has created a nationally recognized model for environmental education and stewardship. The new center’s board rightly identifies the need for educational opportunities that connect children with nature. They would be well advised to develop a cooperative relationship with the Urban Ecology Center. 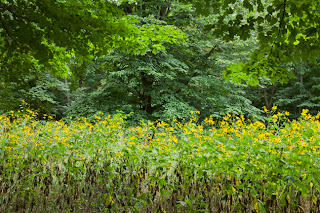 Cooperation also should be the watchword amongst the several entities with similar interests that fortuitously share the County Grounds. With effective and visionary planning and collaboration the new Forest Exploration Center, along with the new County Park, the Monarch Trail at Innovation Park, and MMSD’s flood detention basins together can fulfill the enormous potential to make the Milwaukee County Grounds unparalleled urban parkland.
After all, it’s important not to lose sight of the forest for the trees! 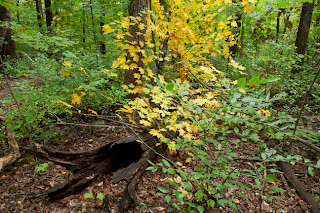 A hundred years after Teddy Roosevelt, another president, George Bush, said this:
“Trees can reduce the heat of a summer's day, quiet a highway's noise, feed the hungry, provide shelter from the wind and warmth in the winter. …Forests are the sanctuaries not only of wildlife, but also of the human spirit. And every tree is a compact between generations.”
Click here for an aerial view of the forest and surroundings.


Click here for an aerial view of the forest and surroundings. 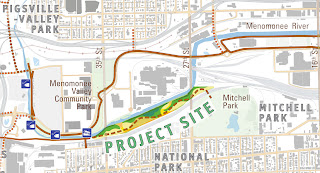 "Making a Wild Place in Milwaukee’s Urban Menomonee Valley" won an honor award from the American Society of Landscape Architects. The award recognizes the importance of this design to the restoration of the Valley, a place that "has been mistreated for a hundred and sixty years."

The winning design firm is Landscapes of Place, LLC. The team of Nancy Aten and Dan Collins are the principles of the firm. Congratulations!

A project description can be seen on the ASLA website.

Believing in an urban wilderness makes about as much sense to most people as the wonderland Alice discovers when she throws caution to the wind and follows the white rabbit down the rabbit hole. However, I am a great believer in that paradoxical experience. We in Milwaukee County are fortunate. The county’s Parkway system provides many marvelous examples of urban wilderness, something that is what it isn’t. 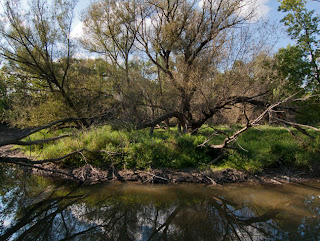 Many stretches of the Menomonee River Parkway near where I live are heavily wooded and lovely to walk through. There is one place, though, that I find almost magical. Every time I go there I feel as though I’ve fallen into something like Alice’s rabbit hole, where what you wouldn’t expect to see, you see.
I leave my car at the end of the parkway drive. The paved off-road Oak Leaf Trail bike path runs north from there, but I am averse to pavement. I head due west, across a short bit of lawn, onto a well-trodden path that leads into what appears to be solid forest. Hardly a secret, dog-walkers and mountain bikers use this entrance to follow the trail, which cuts immediately south along the riverbank where the riparian woodland provides shade. 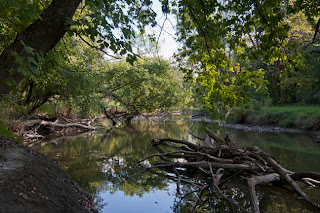 But I go straight through what is actually a narrow screen of trees at this point. Here is my rabbit hole. I emerge into dazzling sunlight and waist-high grass. Before I can even focus my eyes on it (let along my camera!) a great blue heron lifts off from the nearby limb of a long-dead tree and disappears across the river. The whisper of its large, lanky form skating over the forest canopy kindles my imagination, evokes something primeval. I behold a natural wonderland that envelops my senses.
For perhaps a dozen feet other curious explorers have trampled the grass. But clearly most of them have been stymied, for the trail ends abruptly at the steeply eroded riverbank. A much fainter path leads off into the marsh northwards. I often come prepared with boots, knowing that I may need them to go farther. Today the near drought conditions enable me to proceed in street shoes. 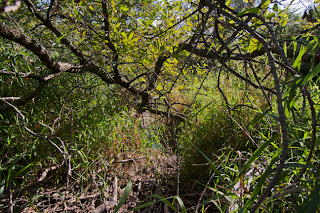 The marsh glows in the late afternoon sun. There is no other person about. It seems impossible. I am in the most densely populated metropolitan area in Wisconsin and my solitude is immense, the wildness is palpable. The scree of a hawk punctuates the feeling. 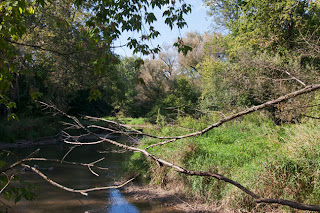 The wilderness deepens further as I cross the marsh and enter a woodland swamp. Giant black willows lie broken on the forest floor in various states of decomposition. Moss, fungi, and the new sprouts of resurgent willow rise from the decaying mass.
A trio of deer startle at my approach, then bound off in alarm at my intrusion into what is obviously their domain. From the edge of a pond two more herons arise, like wraiths, in silence. My spirit calms. The daily tensions of civilization disappear like deer in the dusky forest, like herons in the sultry blue sky. 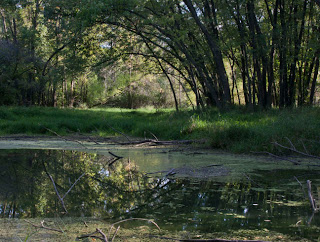 That I don’t find conversational caterpillars or animated playing cards doesn’t make this place less wondrous to me. 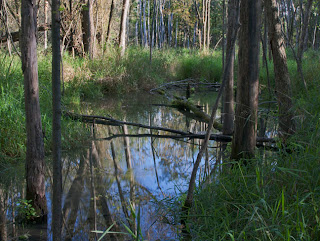 Alice says, “If I had a world of my own, everything would be nonsense.” Well, I have a world of my own – we all do. Sense or nonsense, our world never will be more or less than what we imagine it to be. Cities can be the repositories of wilderness, providing opportunities for salvific engagement with nature, wildlife, and open space.
“Alice laughed. ‘There's no use trying,’ she said: ‘one can't believe impossible things.’
‘I daresay you haven't had much practice,’ said the Queen. ‘When I was your age, I always did it for half-an-hour a day. Why, sometimes I've believed as many as six impossible things before breakfast.’”   –Through the Looking Glass
Posted by eddee at 2:42 PM No comments:

Reflections on Wilderness from opposite poles of experience

I guess I wouldn't call one of these "parkmobiles" an urban wilderness, but it's a clever idea. A little piece of greenspace is better than none at all!


The article, Tiny Parks are on a Roll, is from the Los Angeles Times, but is about the parkmobile project being undertaken in San Francisco.

For a very different point of view, an article entitled "A Well-Regulated Wilderness" reflects on the nature of the term and the need for management and rules that preserve the illusion of the freedom of wild lands. Some of the author's thoughts echo those I included in my book on Urban Wilderness.
Posted by eddee at 9:29 AM No comments:

Power lines may ruin what remains of parkway