The County Asylum Cemetery, perched above the slope overlooking one of the flood basins on the Milwaukee County Grounds is itself easy to overlook. The small patch of remnant woods stands out well enough, surrounded as it is by a landscape stripped of mature trees. But it seems somehow out of place, if not out of time. 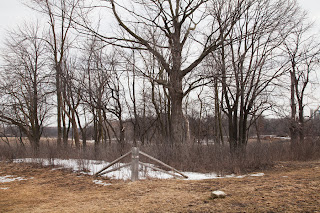 The woodlot/cemetery is demarcated at its four corners by symbolic fence posts, more representative of a belated regard for those interred there than to identify the place. The sign reads, in part, "The ground before you contains the mortal remains of approximately 200 souls...." After providing some historical facts, it concludes with "May they, at rest, find the peace and sanity they desired in life." 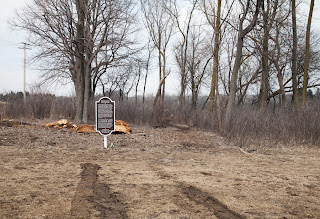 On this Easter Sunday, the last day of March of 2013, a lingering wintry drabness makes the woods seem lifeless. It is that time during the long Wisconsin transition from winter to spring when it seems as if the flowers ought to be blooming but still are not. 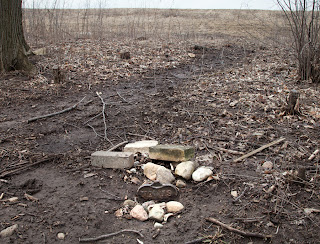 Only two grave sites are visible. One bears an official-looking, if bureaucratic marker: No. 19 imprinted in iron. 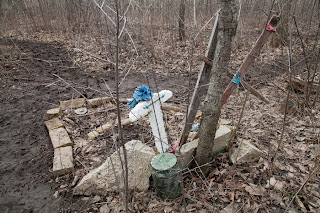 The other has been outlined with cream city bricks and adorned with makeshift crosses. Its odd shape gives a provisional character and the weathering of the artifacts indicates that they have endured at least one winter without replenishing. 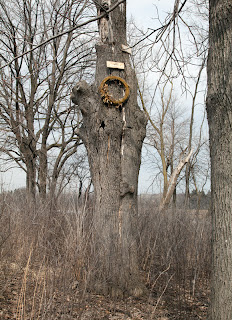 Rough paths criss-cross the wood and while I am in it I meet a dog owner with his two large charges, adding to the muddy tracks. Someone else has been here, too. High in several of the trees a number of hand lettered signs have been posted on unpainted planks of lumber. The two on this large, dead tree trunk say "remember" and "peace." Others say, "joy" and "ephemeral." The most poignant asks of all who enter the somber wood, "why?" 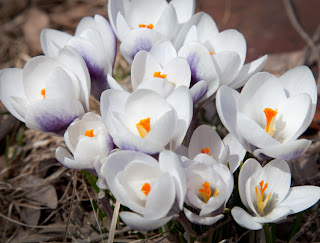 Easter is about resurrection, of course. I detoured from my usual walking route through the County Grounds into this plot of lost souls today. It seemed appropriate. I had to crouch close to the ground to see them, but, yes, there are crocuses today. That made it all the more appropriate. Resurrection - the real meaning of Easter: spring is nigh. 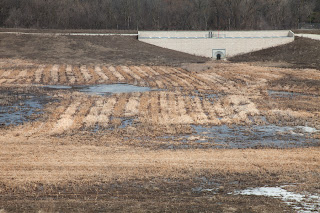 If you've been to the Grounds lately, or driven by on Swan Blvd., you may have noticed that the bottoms of the flood basins have been mowed. I've been wondering when that would be done. Overdue. It's an important maintenance procedure to keep the woody plants and weed trees from taking over the wetland habitat. It doesn't look very natural, unfortunately. I favor burning, but that's a tough sell in this neighborhood! 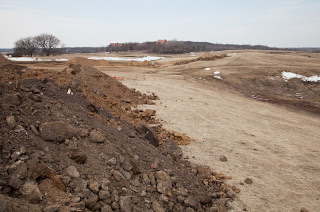 And then there's the new development sprouting atop the crest of the County Grounds where construction on the infrastructure for Innovation Park - utilities and roads - is beginning. Of the County Asylum, the Agricultural School, the poor farms and other county facilities that once enlivened the Grounds little remains. It appears barren and rather bleak today, but in a different light this could be seen as another sort of resurrection. 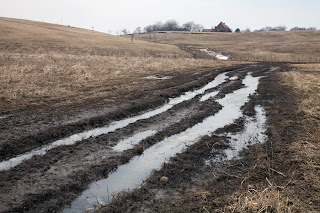 The land is dull shades of brown and gray, awaiting the resurrection of grasses, wildflowers, and newly planted trees. The receding snow and ice here in the County Grounds Park - the part of the Grounds that is "protected" - reveals a little of the pressure on this landscape. The County Grounds, as one of the last remaining open spaces in Milwaukee County, means many things to many different, sometimes competing, constituencies. What I think it needs is a resurrection of hope as well as a commitment to a sustainable future, one in which harmony with the natural world is understood as a primary and inherent value. May we all find the peace and sanity that we desire in life!

I guess the logic goes something like this: it's already developed and therefore aesthetically compromised, so more development in the form of overhead power lines won't matter to people who live in the Milwaukee area. Or, to be more precise, in Wauwatosa, near Underwood Parkway and the Milwaukee County Grounds.

According to an article in yesterday's Journal Sentinel, "'Selecting another route would shift millions of dollars of extra costs for underground lines to ratepayers in the ATC footprint far removed from the Milwaukee area, who would not benefit from a more aesthetically pleasing project area,' the commission's decision says."

The short-sighted decision by the Public Service Commission disturbed many in the region who have worked very hard to support alternative routes.

The City of Wauwatosa is one of the stakeholders considering what further options, including the possibility of legal action, may be used to challenge this decision. (May the odds be ever in their favor!)

If you go to the article in the Journal Sentinel you will see a map that isn't completely accurate. I learned today at a meeting for County Grounds stakeholders that the section shown crossing the County Grounds will actually turn at Hwy 45 and run south to Watertown Plank Rd. where it will follow the dashed line to the substation. The correct map is below.