This 78-acre preserve near East Troy is mostly a series of kettle depressions that contain the bog. A short, hilly upland trail leads to a boardwalk in the largest kettle. The boardwalk winds through lovely tamaracks and terminates at the only open water. 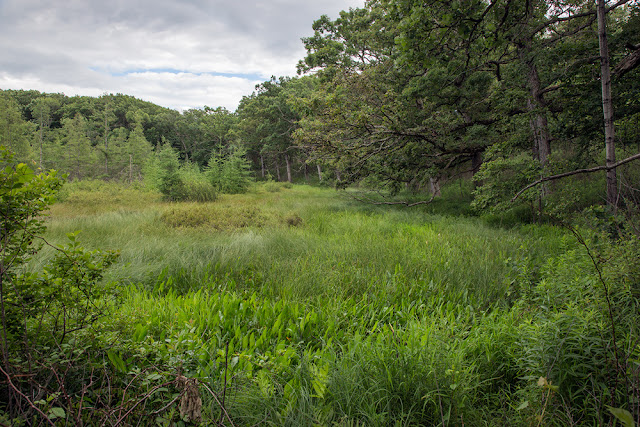 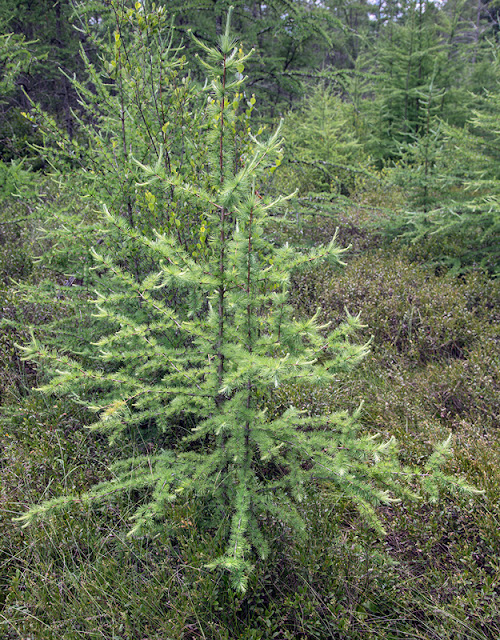 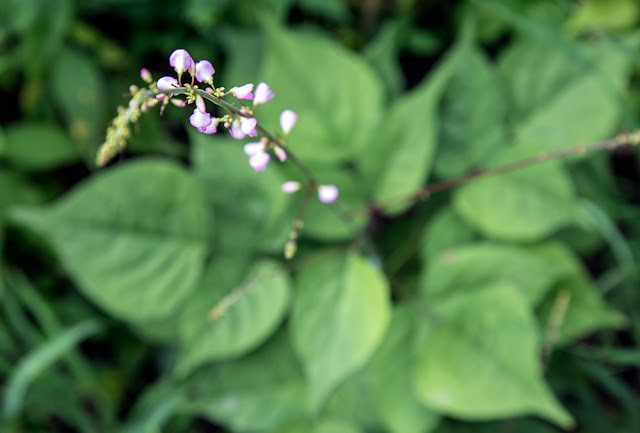 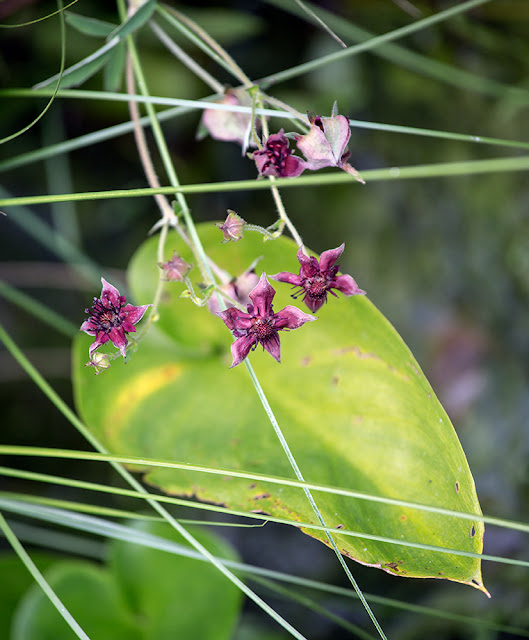 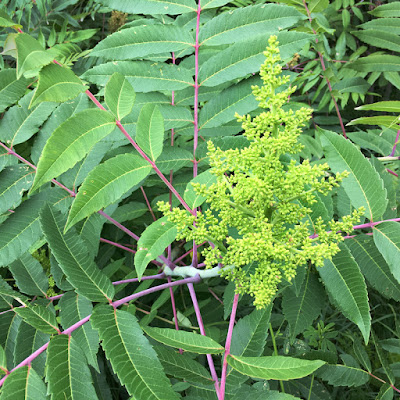 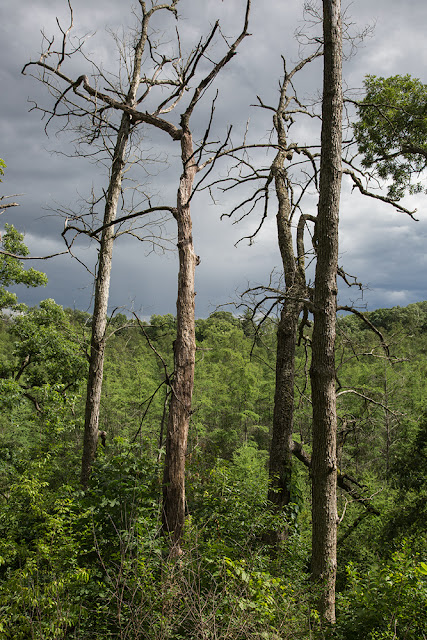 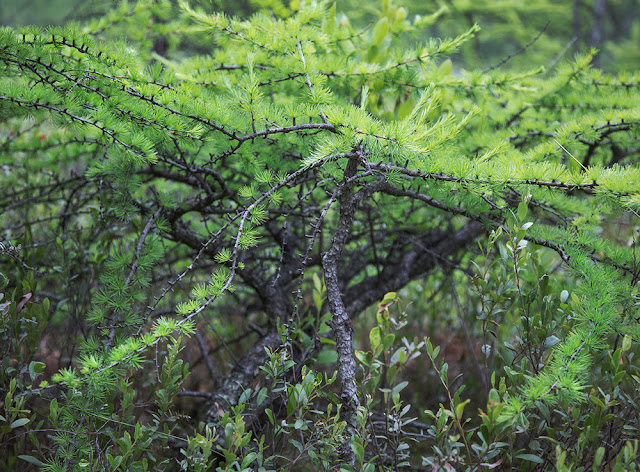 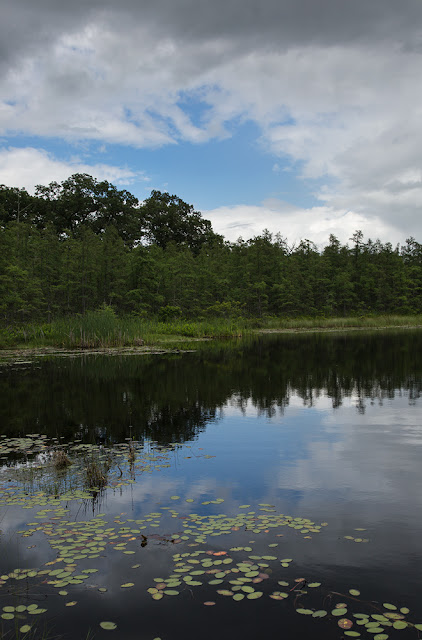 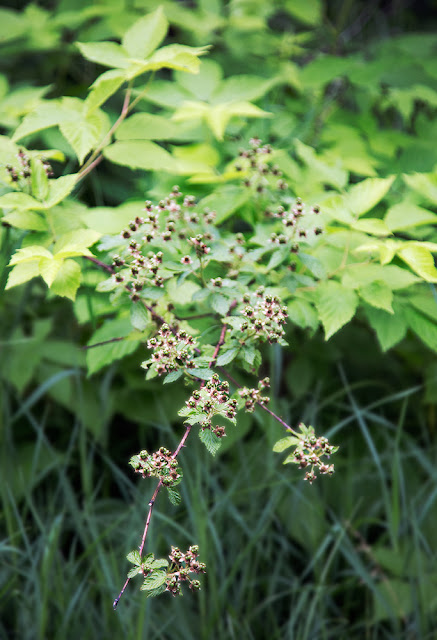 I was unaware of Beulah Bog until recently when my friend Kimberly Mackowski told me about it and then showed me how to get there. Kimberly has a website and blog called The Park Next Door. You can see her photos of Beulah Bog by clicking here.

One of the highlights on a daylong tour of Ozaukee County parks was this patch of Queen’s Lady’s Slipper blossoms. The rare orchid, also known as “Showy” Lady’s Slipper for obvious reasons, has disappeared from much of its former range because its preferred soggy habitat has also largely disappeared. But there it was, almost within arm’s length, next to the narrow boardwalk that allowed me to walk into Cedarburg Bog—prime orchid habitat.

Like the flower, the opportunity to enter the boardwalk at the Cedarburg Bog State Natural Area between Saukville and West Bend is also rare. Operated for research and educational purposes as a U.W.—Milwaukee Field Station, access is usually restricted. But as one of the “Treasures’ of OZ” the bog is part of an annual celebration of parks, preserves and natural areas in Ozaukee County.

I was delighted. Although I’d been to the research station before I’d never been out into the actual bog. The boardwalk led through thickets and across a large pond covered in lily pads fringed with cattails. The trail continued on over a couple of islands of solid ground before the boardwalk resumed and plunged into the heart of the bog. Several species of native Wisconsin orchids more diminutive than the Lady’s Slippers appeared here and there.

Most exotic to me, however, were the pitcher plants, which grew out of the waterlogged earth in abundance. The carnivorous plants were in bloom, which was new to me. The blossoms, past prime, had lost their drooping petals, leaving behind a flower head that resembled an alien satellite dish. Brightly colored blossoms of many species speckled a landscape dominated by tangled knots of stunted tamaracks. The boardwalk and the special event made it possible to visit an otherwise impenetrable wilderness.

More than a clever marketing phrase, “Treasures of OZ” was billed as an Eco-tour and Science Expo. The “expo” parts of the tour featured a wide variety of interesting activities involving wildlife, science displays, food vendors, music and a raffle. But clearly the real treasures of OZ are the natural havens themselves.

Ehlers County Park is a narrow strip of riparian land along the Milwaukee River two miles north of Saukville on Highway W. It boasts a prairie awash in wildflowers as well as 2,200 feet of shoreline. Scientists with the Ozaukee County Fish Passage Program and Milwaukee Riverkeeper were on hand for the tour to demonstrate the diversity of fish and macro-invertebrates in the Milwaukee River. 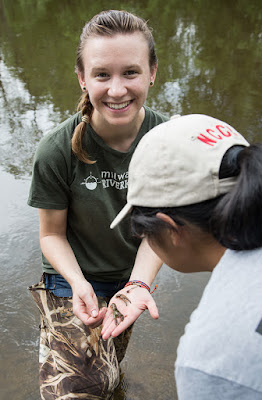 Kelly Ostrenga, with Milwaukee Riverkeeper, holds a rusty crayfish, an example of a macro-invertebrate.

As I would learn belatedly, Tendick Nature County Park has two segments. Since I foolishly neglected to consult either the Treasures of OZ website or a map, I turned in at the first segment I reached as I drove north on Highway O from Saukville.

Surprised to find no one there, I nevertheless enjoyed the prairie and magnificent clouds before heading back south without discovering the second, larger and more popular segment. Sometimes you find what you’re looking for…

…but if you remain alert you will discover what is all around you.

My final stop of the day was Forest Beach Migratory Preserve, the epicenter of the Eco-tour and Science Expo. Randy Hetzel, a genial and loquacious naturalist with a traveling wildlife collection, thrilled a rapt crowd with a menagerie that included snakes, frogs and turtles. Having experienced their ferocity in the wild, I was particularly amazed to see how casually he and his teenage daughter handled a huge snapping turtle.

Forest Beach is home to the Western Great Lakes Bird and Bat Observatory. Its mission is to study bird and bat populations and promote their conservation throughout the Western Great Lakes region. After stopping indoors briefly to inspect the exhibits, I headed out to explore the trails. I didn’t notice many birds—migration season has passed—and it was too early in the day for bats. What I did see in astonishing abundance were a wide variety of butterflies.

I had heard that the 116-acre preserve had once been a golf course. As I wandered through the wildflowers with butterflies fluttering all around me it was hard to imagine fairways and greens. The thunderstorms that had been predicted never materialized but a turbulent sky rose over a landscape that remained serene and entrancing. We humans have little in common with orchids but like those delicate and sensitive flowers we require a certain measure of nature in our lives. I know I do. And I feel fortunate to live near enough to enjoy these treasured places.

You can see more photos and additional treasures of Ozaukee County on Flickr.
Posted by eddee at 2:42 PM 3 comments: 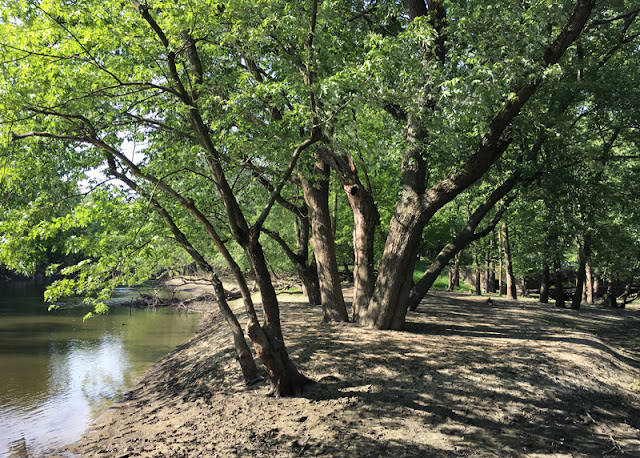 On a Sunday afternoon recently I drove down from Milwaukee to pick up my wife at O’Hare. Her flight was due to arrive in the late afternoon when traffic tends to pile up as travelers return to Chicago from their weekend in Wisconsin. I’ve been in this position before. I like to avoid potential backups on the Interstate by going early and taking the time to stroll in one of the Forest Preserves along the Des Plaines River near the airport. 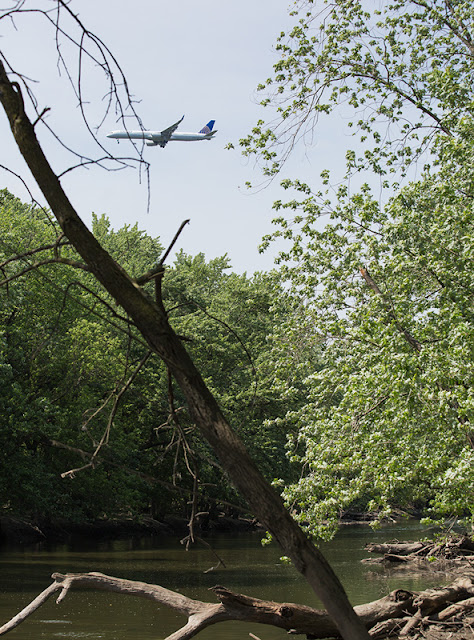 I happened upon a sign for the Seymour Simon Preserve and pulled into the nearly full parking lot next to a large open field. Large groups of people were using the shelters provided there. I found the Des Plaines River Trail and headed south along the river. Maybe it was the heat—somewhere between 80 and 90, depending on whether you were in shade or sun—but the trail was uncharacteristically busy that day. So was the river itself. I saw canoers and kayakers going upstream and down.

Here is a short photo essay from my stroll that afternoon. As you will see, wildlife is represented, but most of my encounters were of the human variety. 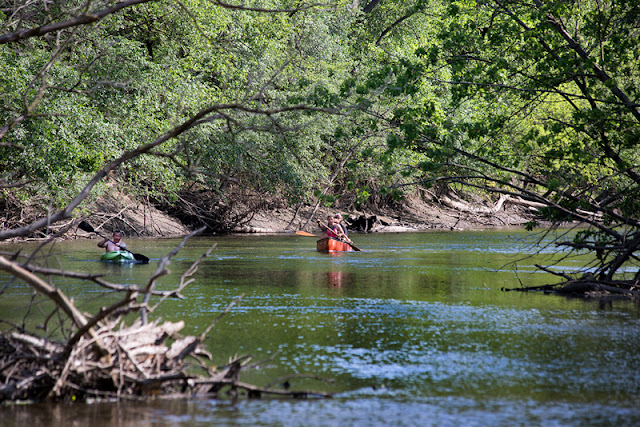 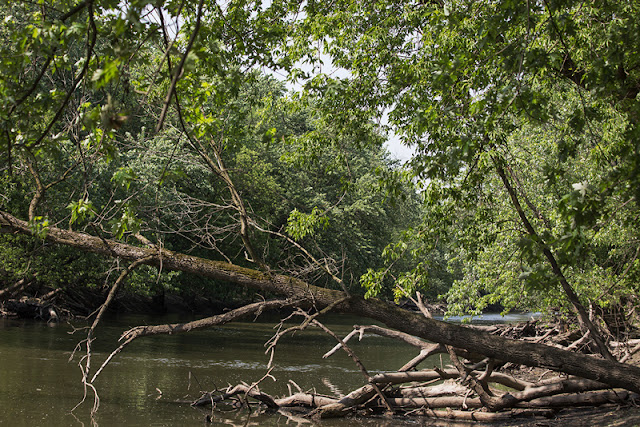 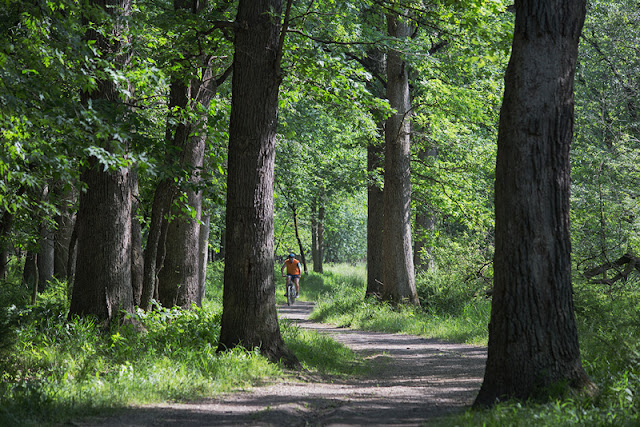 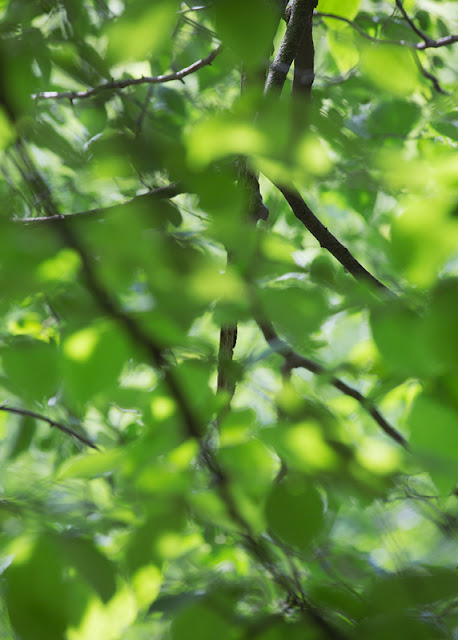 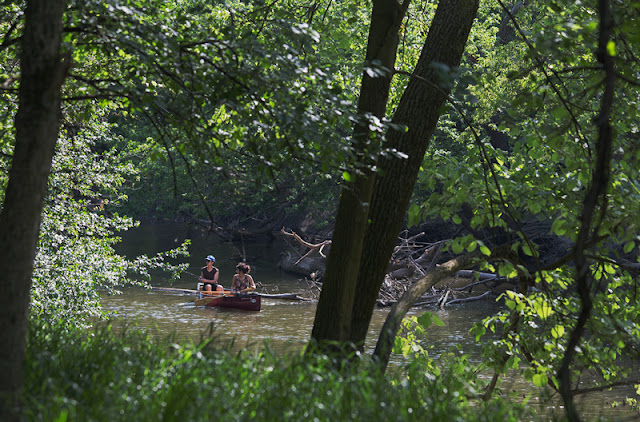 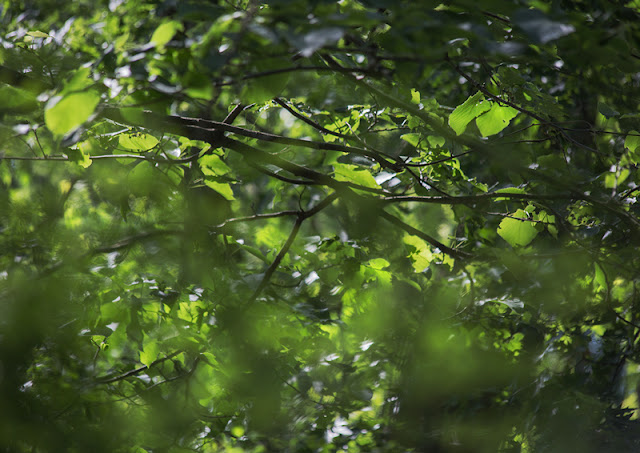 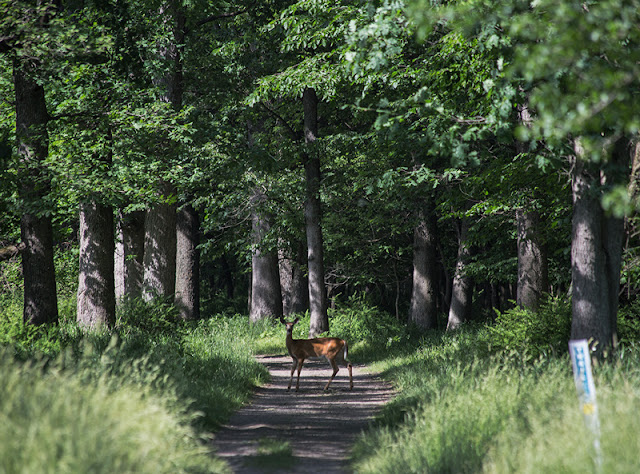 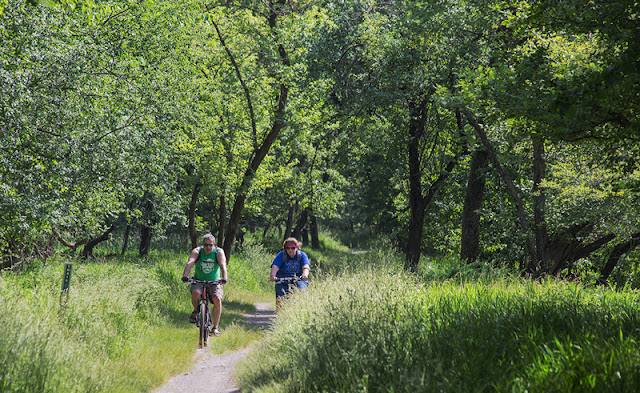 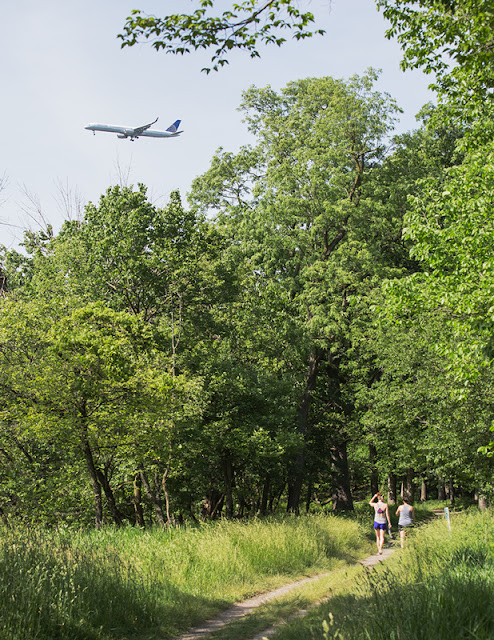 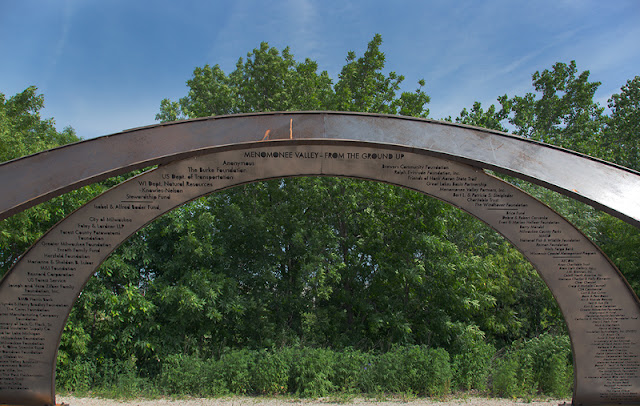 The next time you visit Three Bridges Park walk to it using the path from the Urban Ecology Center on Pierce Street. You will see an elegantly arched steel structure that has been newly placed along the Hank Aaron State Trail not far from the Valley Passage. On the inside surfaces of the twin arches you will see the laser-cut names of donors who made the park possible.

The primary purpose of the arches, which were dedicated recently, is to represent the named donors—and there are many. But they also symbolize the bridges for which the park is named, along with the metaphor of that name for a park that owes so much to so many and means so much to such a diverse constituency.... 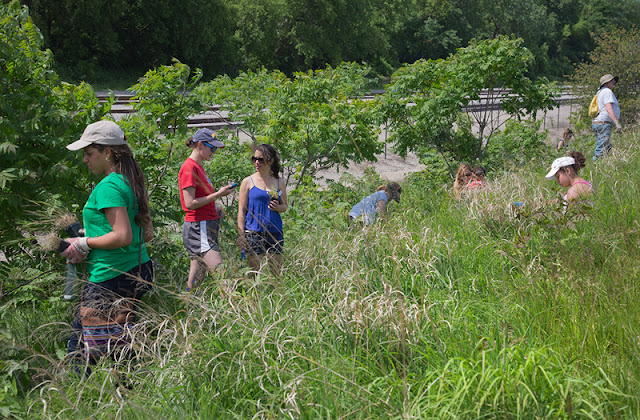 ...Elsewhere in the park it was spring planting day. A couple dozen volunteers, along with Urban Ecology Center staff members, braved the heat to plant 900 small potted seedlings along the south edge of the park where lush vegetation meets a still running railroad.

This story was published at Milwaukee Magazine.  Click here to continue reading. 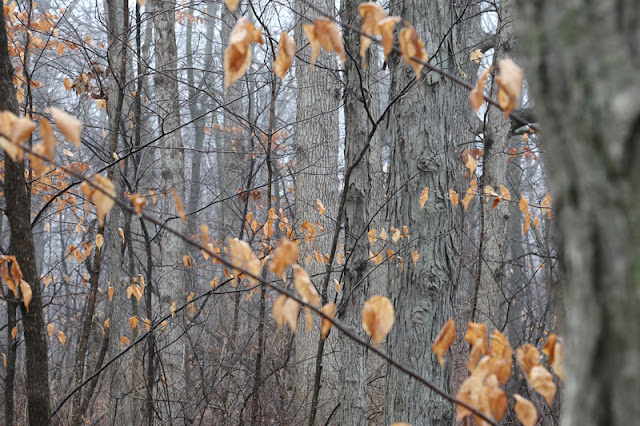 Although I’ve been back many times in all seasons, my first visit to Falk Park was most memorable. A personal quest to see wildflowers motivated me. Brian Russart, Natural Areas Coordinator for the Milwaukee County Parks Department, had recommended Falk. The small parking lot was easy to find, on Rawson Avenue just off the exit from I-94 in Oak Creek. Although it was a pleasant day in early spring there were no cars in the lot when I arrived. 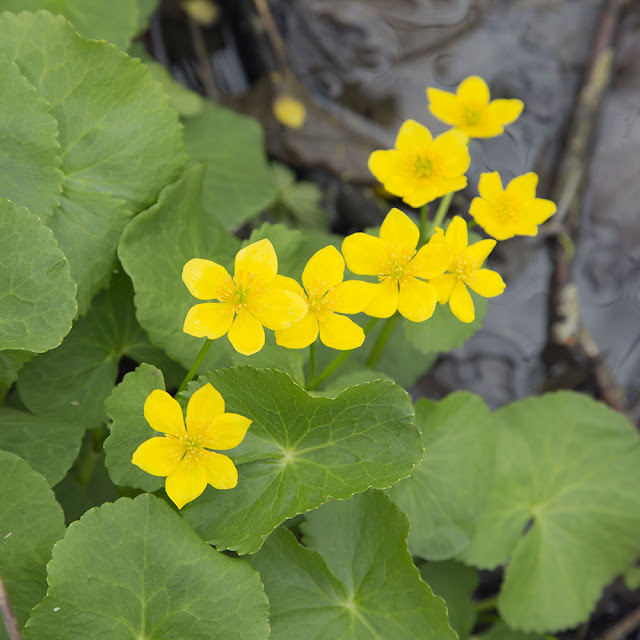 I walked along a wide path that led more or less straight into the forest. Most of the trees were bare. The only leaves still clinging to gray branches were desiccated leftovers from the year before. The ground, swaddled in dead leaves, was likewise brown and gray. Where were the flowers, I wondered? ....

This story is published at Milwaukee Magazine. Click here to learn about all five hidden gems.
Posted by eddee at 11:08 AM No comments: