“Evolution is one of life’s constants. New species emerge; old ones become extinct. Environmental changes have often steered evolution in new directions. And modern cities like New York have brought particularly swift changes to the environment.”
And so, according to this fascinating article in the New York Times, scientists have begun studying evolution in some of the most unlikely of places, including the medians that divide traffic lanes on busy streets.
Like studying evolution anywhere, the work isn’t always easy. However, the complications in an urban setting tend to be somewhat different than in, say, the Amazon rainforests: “We get police called on us a lot,” said Dr. Munshi-South, an assistant professor at Baruch College. “Sometimes with guns drawn.”
Some of the equipment they use gets mistaken for drug paraphernalia, too.
“…Urban evolution is attracting more research these days, because cities are fast-growing, and the urban environment is quickly taking over large areas of the Earth’s surface.”
The issue of invasive species is another constant in evolutionary studies. This article offers an unusual perspective: “As the invaders adapted to New York, they put extra pressure on native species, competing with them for space and food. In the Brooklyn Botanic Garden, for instance, American bittersweet vines are dwindling away, outcompeted by Oriental bittersweet. At the same time, the two species are interbreeding, producing hybrids. “It’s a double-whammy,” said James D. Lewis, a plant ecologist at Fordham University.”

Check it out: Evolution Right Under Our Noses.

Underwood Creek has long been a troubled waterway. Much of it was channelized in the 1960’s, as is most dramatically evident in this view west from 115th Street in Wauwatosa. Now Waukesha  wants to dump its (treated) wastewater into Underwood Creek – from whence it would flow into the Menomonee River. 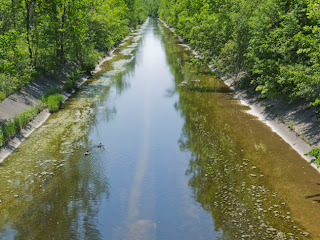 If you’ve been following this issue you know that the diversion of Lake Michigan water over the boundary of the Great Lakes watershed has been highly controversial. Although the Wisconsin DNR recently approved the application process, allowing it to move forward, the decision still must be ratified by the governors of all states (and provinces) that border on the Great Lakes, in accord with the Great Lakes Compact.
I urge everyone to attend one of three public hearings that have been scheduled for southeastern Wisconsin to give the DNR a chance to provide an overview of this process.
One of the public hearings is at 5:30 on Wednesday, July 27, at Hart Park in Wauwatosa.
The other two are in Pewaukee (July 26) and Sturtevant (July 28). For much more information about the issue and all three public hearings, go to Milwaukee Riverkeeper. 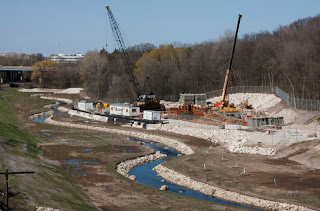 On the unfortunate and ironic side, a section of Underwood Parkway, near Watertown Plank Road, is being repaved. I’m all for new pavement. This parkway has been getting progressively worse for many years. But why are they putting in curbs? 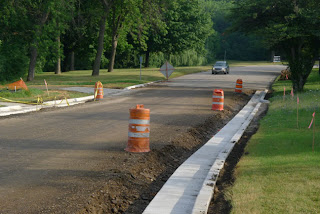 Progressive streetscaping uses swales instead of curbs. Swales are gently sloping ditches that allow stormwater to soak into the ground instead of running along the curb and into a sewer pipe. They are a perfect solution for a roadway like the parkway. How much taxpayer money has gone into flood management on both sides of this parkway, along Underwood Creek and in the County Grounds? But now we’re putting in new curbs and sewers to carry off stormwater instead of inexpensive swales? 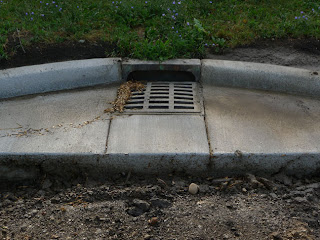 I’ve never been able to get so close to a great blue heron before – not without startling it into rapid retreat. I had been strolling along the bank of the Chicago River in the shade of the dense hardwood forest canopy. I came to a clearing where the slant of the evening light shone like a spotlight on the opposite bank. My attention was drawn by the dramatically splayed skeletal roots of a long dead stump and the symmetry of its mirrored image on the water. 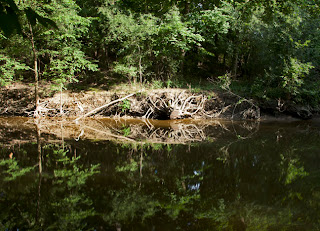 I made my way incautiously towards the point on the bank opposite it to frame a good shot of the stump. I set up my tripod and looked through the viewfinder. Only then did I notice the heron perched on a log off to the side, motionless and perfectly camouflaged against the exposed earth and tangle of roots on the deeply eroded bank. 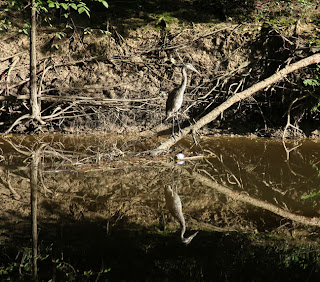 I was stunned. Not by the heron’s presence; I see them frequently along urban rivers. The surprise was that it remained there, so still and poised, focused on its quarry below the surface, after I wandered carelessly into its field of view. An ancient bird, the great blue heron has adapted well to habitats altered by human development. However, unlike some other species, it has not grown accustomed to humans themselves and nearly always flies at the slightest intrusion. 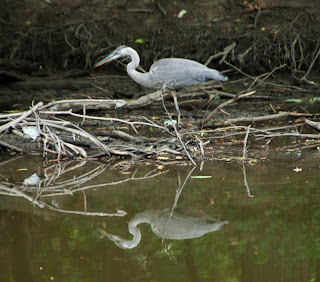 Perhaps its lack of fear was a result of immaturity. The slate gray of a full-grown heron was still mottled with shades of brown and white, indicating this bird’s relative youth. I waited patiently for it to fly off and provide a picturesque moment. It didn’t. Finally, I waved. It looked up at me and then back at the water. Nearing exasperation, I threw a stick. The rippling water fractured its slender reflection but the bird remained imperturbable. Two men jogging on the bank above yelled back and forth to one another. As their colorful outfits flashed by there was no reaction from the heron.
Finally, for no apparent reason, it slid gracefully off its log and sailed away – just after I’d given up and lifted my camera from the tripod, missing the shot. 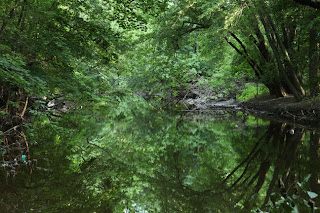 Later, as I rounded a bend and beheld the idyllic scene ahead another heron, larger and grayer, disappeared with more characteristic alacrity, proving the rule that had made my first encounter so surprising. 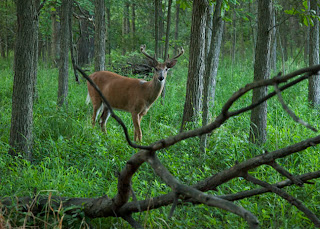 I saw many deer. There are always deer. The whitetail is common enough to be a nuisance. Two does shepherded two tiny dappled fawns as they foraged across the river. Elsewhere, two young bucks with velvet antlers allowed me to get even closer than the heron, without an intervening river. But the self-assured poise of the deer was not surprising; they had little to fear from me and clearly knew it.
I was alone with the animals for quite a while.  But when I came to rail line turned recreational trail that bridged the river I found a refreshingly diverse, steady stream of people using it. I noted two joggers, a cyclist, two young mothers pushing strollers, a dog walker, several solitary amblers, and a trio of shirtless Hispanic teens in thigh-hugging baggy pants and exposed boxers. All were enjoying a tiny green space wedged between Chicago’s urban grid and a curve of the Edens Expressway. 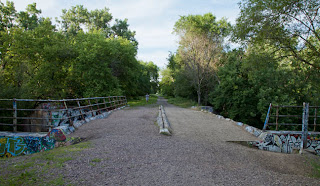 I crossed the old railroad span – staying well away from the edge without any railing! Through the trees ahead I spied a field full of soccer players. I was reminded of Richard Louv’s book, “The Nature Principle,” in which he insists not only that everyone needs the tonic of wildness to maintain wholeness and mental health but also that we who already love the parks need to understand the cultural and preferential differences of others who use parklands and the various needs that they satisfy. 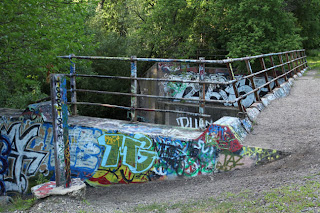 On the other hand, there must be limits to tolerance, including abuse of the natural resources themselves. I wasn’t bothered by the graffiti, since some unwritten but welcome code confined it to the concrete of the bridge abutments. 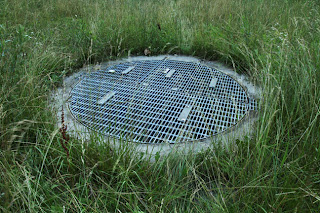 At the start of my little excursion I had passed the incongruously placed grate that provides access for one of Chicago’s extensive system of stormwater tunnels. Randomly interspersed around the same meadow were small patches of grass that appeared to have been burned. Returning through the meadow by a different route on my way back to my car the mystery was solved when I came across the sulfurous remains of someone’s impressive arsenal of fireworks. 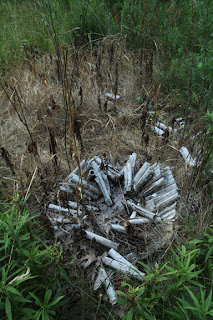 It is easy to decry the destruction caused by unsupervised explosions. The stormwater tunnel, which stores raw sewage during storms for later treatment, represents ecological impacts of human development on a scale that are much harder to fathom. The urban wilderness, always a place rife with paradox, reveals challenges while it provides opportunities.
"I am glad I shall never be young without wild country to be young in. Of what avail are forty freedoms without a blank spot on the map?" These lines of Aldo Leopold’s are often quoted. I’ve quoted them before myself. Sadly, more and more young people grow up far from the truly wild areas to which Leopold was referring. On the brighter side, more and more people, young and old, like the ones I was seeing here, are realizing the virtues of what Louv calls “nearby nature” and are making efforts to experience the freedoms it provides without leaving the city they live in. 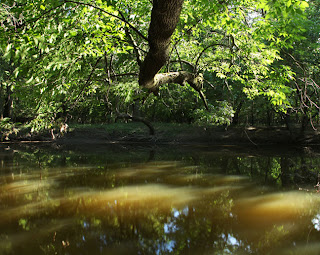 I did a Google map search to find this park, which is called LaBagh Woods, before I came down from Milwaukee. I do that whenever I plan to travel and expect to have a little free time for exploring. When set to “map” mode the green areas on a Google map look remarkably like “blank spots on the map.” Clicking on “satellite” mode reveals the lush textures of woodland canopies that, for so many of us who live in cities, can and must be a substitute for Leopold’s vision.
Posted by eddee at 10:15 AM No comments:

Barb Agnew is probably familiar to regular readers of Urban Wilderness, but in case you don't know who she is, she is the Barb in Barb and Dick's Wildflowers, a lovely flower shop on the western fringe of Wauwatosa. She is also the founder of the Friends of the Monarch Trail and indefatigable defender of the Milwaukee County Grounds, which is where the Trail is located.

She is the subject of a nice, and well-deserved, write up on the Wisconsin Trails blog. It comes with a few nice slides of her and her beloved butterflies.
Posted by eddee at 8:52 AM No comments: