Song of the Urban Ranger


I would like to be an urban ranger myself. Although I can claim "purposeful" about my walking, I would do well to work on the "sustained" part of the program. 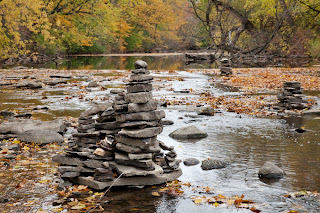 On one of my recent purposeful walks I discovered a shallow stretch of the Menomonee River where there is an abundance of exposed rock. An unknown number of people, fellow urban rangers perhaps, have piled these rocks into towers that are reminiscent of ancient ruins like Angkor Wat. 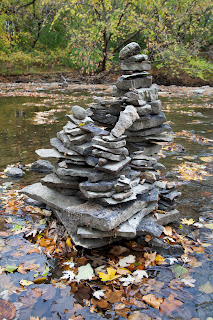 In Los Angeles there is a much more well established organization called the LA Urban Rangers, which I also just ran across. They have an impressive series of programs. Check them out. Every city should have a group like this!
Posted by eddee at 8:51 AM 3 comments:

I just returned from the Wauwatosa City Hall where a public hearing is underway regarding the plans to run transmission lines through parts of Milwaukee and Wauwatosa. The new lines would provide power to a planned substation to be built by We Energies next to its existing plant on the County Grounds. (Read more about these plans. Pictures included in earlier post.)

Much of the testimony was from people associated with either St. Theresa or the Milwaukee Montessori School, both of which will be impacted if plans proceed to run overhead power lines along their properties. I agree with their position that power lines should run underground. Since I don’t live next to any of the proposed routes, my concern is more general. However, it is no less passionate. I don't believe that this is merely a local issue.

Here is the gist of my testimony:

Many of us have heard from representatives of the ATC that the Commission will be choosing a power line route solely on an economic basis, that the cheapest route is always chosen. Furthermore, since parklands will always be less expensive to develop than locations with existing development, they will always be sacrificed for this inherent short-term economic advantage.

I hope that the ATC has mischaracterized the Commission’s intentions, that your deliberations will prove more flexible than they have claimed and that your understanding of the economics involved is more nuanced. If the only economic consideration is the narrow one that considers only the cost of constructing a power line, then by default our community will lose its parklands. More than that, every community where these circumstances exist will sacrifice parkland. Sadly, the places this loss will be felt the greatest is where they can least afford it, densely populated urban areas like ours.

There are many ways besides the cost of construction, of course, to measure economic costs – and benefits. In this case the benefits of preserving parkland and the benefits of burying the lines outweigh the narrow, short-term economic considerations. Some of the benefits are less tangible, like quality of life, but others truly are economic, like property valuations and the costs of physical and emotional health. These costs would not be bourn by the ATC but by the larger community. Ultimately, the short-term economic argument makes everyone poorer.

This is not just hearsay. There is legal precedent for the larger, more long-term economic view. In a 1971 ruling the US Supreme Court established in principle that parks should not be developed solely because they would be the cheapest alternative.

The loss of scarce parkland in urban areas is not an insignificant issue. Because of the well-documented benefits the current trend in cities throughout the country is to revitalize open spaces and to increase parklands wherever possible. Wisconsin has a well-earned reputation for its concern for the natural environment. If power lines are allowed to be built in urban parklands, not only will local communities suffer, but our reputation will be tarnished. It not only will be a huge step backwards but one that goes against prevailing wisdom.

I urge the Commission, as so many others are doing, to choose a route other than Underwood Parkway and to bury the lines.  (End of testimony.)

I might have added that, as a ratepayer myself I am willing to pay the extra amount that would be charged to pay for underground transmission lines. I also don’t understand why the ATC (as opposed to the PSC) has been so insistent that the cheapest route be chosen. Their interest, which is to profit from the construction of the line, is served in any case.
Posted by eddee at 12:16 PM 1 comment:

I am thankful for, among other things, the opportunities I've had this year to explore and enjoy the outdoors.

A thanksgiving thought from Thoreau: 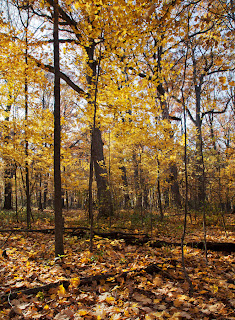 Autumn splendor in Wil-O-Way Woods on the County Grounds in Wauwatosa. Happy Holidays to all!