Scott Walker and the new Republican legislature want to make it easier for developers to pave paradise and put up more parking lots. As the River Rat says, we're going to be "open for business; closed for habitat."

See good stories at Milwaukee Riverkeeper and the River Alliance.
Posted by eddee at 7:26 AM No comments:

Alienation from nature goes to a new low in as people flock to an indoor “park” with fake grass, plastic foliage, and lighting fixtures that simulate sunlight in order to “treat seasonal affective disorder.” The artificial park described in an article in the New York Times is not even aesthetically tasteful, like ’s domes or any indoor botanical garden might be. I can relate to seasonal affective disorder – winters can be long and brutal to the soul. But has plenty of real parkland outdoors – more than most cities – and there’s no substitute for the real thing when it comes to nature. If it’s cold it’s a good idea to bundle up, but still...go outdoors!
This story is sad on so many levels:
The Grass is Fake, but the Splendor is Real.
Make sure you check out the slide show, it is unbelievable.
Posted by eddee at 2:19 PM No comments: 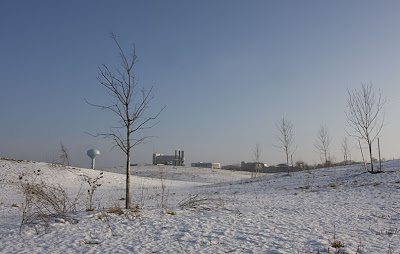 Supporters of the Monarch Trail and the in know very well the value of the land there as wildlife habitat and urban open space. But if we’ve learned anything in the 12+ years of effort to protect it, we’ve learned we can’t take it for granted.
As most of you know, for various reasons the purchase of 89 acres by the UWM Real Estate Foundation, agreed upon by the in 2009, has been delayed many times. Now, after making a commitment, the foundation is requesting another extension on a payment towards the parcel. While I have questions about that I don’t have any real problem with it.
My concern is for the Habitat Plan that was adopted by the Board and agreed to by the Foundation as a contingent to the sale. At the time of the well-publicized signing, the , the UWM Real Estate Foundation, and environmental groups saw this agreement as a win-win for the protectors of wildlife and the proponents of development. As the realities of proceeding with this development during the current economic climate unfold there is a danger that the original consensus and commitment will be diminished. This shouldn’t happen. Protecting the habitat and preserving the character of the open spaces are still in everyone’s best interest. There should be no transfer of ownership without an understanding that ownership entails stewardship of the habitat as agreed upon.
The Economic Development Committee meets on January 24 to deliberate on the request for an extension of payments. I urge you to contact the members of the committee and express your concern. The message is simple:
All requests should honor the original commitment to preserve, protect, and maintain the designated wildlife habitat areas and the implementation of the Habitat Plan should begin immediately. Delaying payments should not delay the implementation of the Plan.
Guidelines have been adopted. The Foundation has agreed to them. The County Grounds Preservation Coalition is ready to lend its expertise. But it needs to be funded and it needs to begin soon in order to prevent further damage.
Contact info for the Economic Development Committee:
Johnny L. Thomas - 18th District  ▪  (414) 278-4259  ▪  johnny.thomas@milwcnty.com
John F. Weishan, Jr. - 16th District  ▪  (414) 278-4255  ▪  john.weishan@milwcnty.com
Peggy West - 12th District  ▪  (414) 278-4269  ▪  peggy.west@milwcnty.com
Willie Johnson, Jr. - 13th District  ▪  (414) 278-4233  ▪  willie.johnson@milwcnty.com
Lynne De Bruin - 15th District  ▪  (414) 278-4263  ▪  lynne.debruin@milwcnty.com
Theodore Lipscomb - 1st District  ▪  (414) 278-4257  ▪  theodore.lipscomb@milwcnty.com
Nikiya Harris - 2nd District  ▪  (414) 278-4278  ▪  nikiya.harris@milwcnty.com
﻿
Posted by eddee at 7:57 AM No comments:

It’s come to this: the deadliest wilderness on the planet may assume a “circus atmosphere” next December. According to an article in yesterday’s New York Times, plans are already well underway to mark the 100th anniversary of the first explorers’ setting foot at the South Pole on Dec. 14, 1911. Such an anniversary could reasonably be expected to inspire commemorations by and in honor of the achievements of their countrymen, Amundsen and Scott respectively. Their parties reached the pole within weeks of each other. However, staffers of the National Science Foundation’s Amundsen-Scott research station at the South Pole are bracing for an unprecedented onslaught of unofficial guests.

The traditional definition of wilderness as undomesticated and uninhabited land is laced with denotations of unrestrained barbarism and violence. Historically, wilderness was to be feared with good reason. Adventurers exploring undisturbed wilderness understood that their lives were at risk. And among the most famous of those who undertook that risk was the Scott party who reached the South Pole second, on Jan. 17, 1912. None survived the return trip.
But a hundred years after that historic tragedy the same wilderness has become the latest playground for those who seek a wilderness thrill. The fact that we have changed the world’s landscape nearly everywhere to domesticated and inhabited – therefore safe – is an important determinant of this situation. However, the difference is that today’s adventurers are not explorers but tourists. The plans vary. Some expect to follow Amundsen and Scott’s routes on skis, but many more will travel to the pole in relative comfort. For $40,000 you too can fly directly there. For an additional $17,000 you can be dropped off a few miles from the pole “so they can ski the remaining stretch and feel the thrill of victory.”
They want that thrill without the threat of death. While I can relate to that – the urban wilderness premise is based on it – I firmly believe that there are some places that ought to remain untamed. We should never confuse the urban wilderness with any of the few truly wild, dangerous places left. The National Science Foundation agrees that is one of those places. The Times article quotes Robert Swan, an environmentalist: “It’s a place that wants you dead.”
Click here to read the article.
Posted by eddee at 7:50 AM No comments:

A river runs through it! The first thing I normally do when I plan a trip is to look at a map of the place I’m going, to find the green spots. Nowadays, I also look them up on Google Earth to see how green they really are. (Green spots on regular maps have a way of turning out to be athletic fields or mown grass.) When I looked at the map of , I knew immediately where I wanted to go to scratch my itch of exploring an urban wilderness. All along the , which bisects the city, runs a continuous band of parkland. (So many places would be poorer without undevelopable flood plains!)
By some fortuitous coincidence – call it fate, or just incredibly good luck – our bed & breakfast was just a couple hundred yards from the ribbon of green I’d seen on the map. I got up before dawn. The morning air was suffused with an odd and exhilarating mixture of frost and sage. Not in anymore! I walked to the end of the rutted dirt road, breaking ice in the deep puddles. There my way forward to the bosque – the riparian woodland along the – was frustrated. Instead of a wooded river I faced a steeply banked, denuded irrigation ditch. The tops of cottonwoods beyond the tall berm across the ditch beckoned to me, tantalizing. 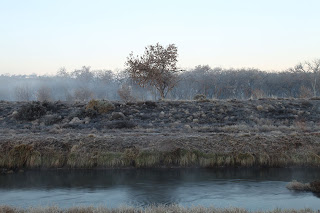 I walked north until, relieved, I reached a footbridge. When I got across I discovered yet another, much wider irrigation canal between me and the bosque. I could now make out a paved path atop the berm. A jogger went by. I needed another bridge. So far, the riverside was far too urban, far from wilderness.
I did make it across, farther north, and I wasn’t disappointed. I discovered the source of that delightful scent, for the bosque floor was covered with sage and other brushy plants. All were rimed with predawn frost, which lent the scene an unearthly whitish blue-green cast. But it was the cottonwoods that I found truly captivating. Huge, widely spread, and delightfully twisted, they seemed to be caught, freeze-frame, in a kind of suspended animation. I never saw them move (the air was quite calm), but I swear, out of the corner of my eye it seemed as though they were dancing. 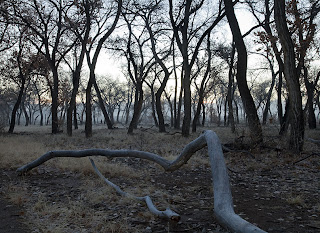 I walked for miles, reveling in the dance of the cottonwoods. The sun rose over the to the east and streamed through the bosque, backlighting my private discothèque of nature. I made my way to the river and managed to catch a glimpse of a large flock of sandhill cranes loitering on a sandbar. They took flight and disappeared too quickly to grab a shot. At the riverside the rising sun also shone brightly on the bluffs across the water, revealing houses positioned to enjoy the view. Earth colored adobe walls do not provide sufficient camouflage to maintain the illusion of wilderness. I head back into the cottonwoods. 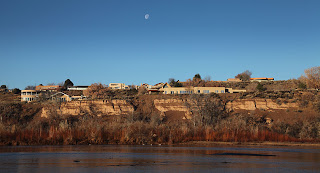 When I reached the I discovered a much more curious disturbance of the natural scenery. Rows of what appeared like WWII vintage tank traps on beaches suddenly erupted from the sagebrush and ran through the cottonwoods. I learned later that they are called “jetty jacks” and were installed decades ago as a (failed) erosion control experiment. They make for an ironic symbol of the contradictions I so often find in the urban wilderness. I’m happy to report that, as funding permits, they are being dismantled. Our B&B hosts are hoping that a section can be preserved as an art object, somewhere away from the bosque. Sounds like a good plan to me! 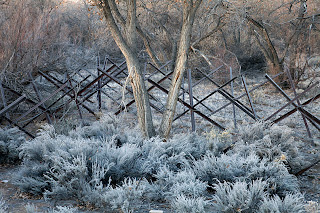 To see additional photos of , go to my flickr page.

This is the first in a series of posts from New Mexico, click here to see the second, from .
Posted by eddee at 7:52 AM No comments: