Concrete River:
Memorial and Promise on the Kinnickinnic River 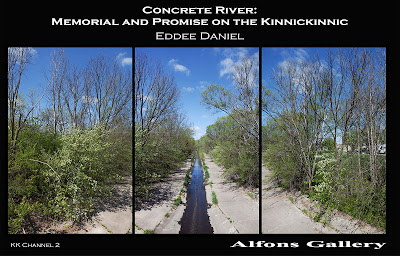 I hope you'll join me and Melanie for this event. This will not be an ordinary photo exhibit. We plan an installation that will make the gallery feel like the concrete channel.

Nothing kills a river like concrete. How we treat rivers is suggestive of how we relate to the natural world in general.

Historically, rivers have been central to the growth of human civilization. This was as true at the founding of Milwaukee as it was in the Fertile Crescent between the Tigris and Euphrates. Somehow, though, in the late twentieth century, our modern society lost sight of this vital truth. Milwaukee’s three rivers suffered many abuses, including habitat loss, pollution and dams. 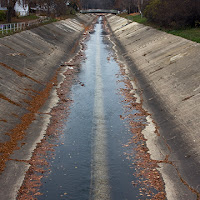 But there’s nothing like pouring concrete into it, essentially transforming it into a drainage ditch, to signal the destruction of a river. Sections of other rivers and creeks in the Milwaukee River watershed were subject to this debasement, but the Kinnickinnic River suffered the most.

In the 1960s the KK, as it is still affectionately known, was straightened and lined with concrete in order to mitigate flooding problems in the surrounding neighborhood. Although at the time this dramatic action did provide some relief from the risk of flooding, it also compromised the river in significant ways. The concrete channel destroyed aquatic and riparian habitats, degraded water quality, and increased the risk of drowning during high water flows. Ironically, today even the original intent of the channelization has become outdated and ineffective for flood control. 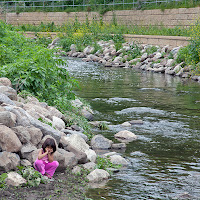 Fortunately, for the river and for the community, attitudes have once again shifted. Caring for and revitalizing rivers has captured the public imagination. On the KK the current solution is a project to remove the concrete channel and restore the river to a more natural condition. When I was invited by the Milwaukee Metropolitan Sewerage District to document the project area I jumped at the opportunity. It’s exactly the kind of subject to which I am drawn.
The KK River Project, officially known as the Kinnickinnic River Corridor Neighborhood Plan, is a joint endeavor by the MMSD and the Sixteenth Street Community Health Center. The project area is located between 6th Street and 27th Street. (An earlier phase of the project, completed in 2012, removed the concrete channel downstream from 6th St.) The 50-ft. wide concrete channel is to be removed and a 200 ft.-wide rock-lined river channel created. This has necessitated the acquisition and deconstruction of 83 homes in order to accommodate the wider river. Although most of those houses had already been removed, I witnessed and documented the deconstruction of several of the few remaining. 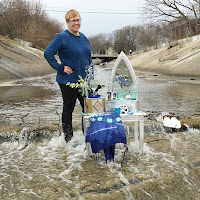 Because the project is in its early phases, most of the images in this exhibit depict the river’s current state as a concrete channel. Furthermore, the installation itself is intended to reinforce the claustrophobic and treacherous conditions that exist. In order to represent the more hopeful future of the KK, I have invited environmental artist Melanie Ariens to collaborate with me on a water shrine to signify the restored vitality that is envisioned in the KK River Project.

See more of my KK River photos in my Flickr album. 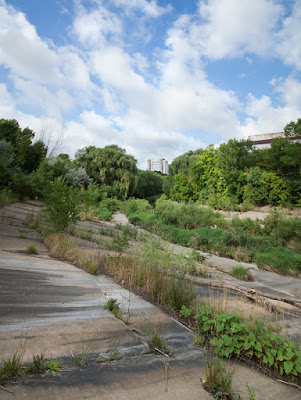 Did you know that the land surrounding the southern edge of Lake Michigan was once one of the most important ecosystems on the continent? I learned that last week at a public hearing I attended in Park Forest, IL. The subject was the Millennium Reserve initiative, which is a huge and ambitious undertaking that will involve--among other things--trying to bring back some of the ecological resilience and biodiversity of that region.

The wetlands of this area are located at the precise point where the eastern forest, central prairie and great lakes ecosystems meet, making it unique and irreplaceable. Of course, it's also where Chicago and Gary, IN created an industrial powerhouse that obliterated much of the natural environment. But, in the current post-industrial climate, there is encouraging new interest in saving what's left and restoring what's possible of this remarkable native system.

The Millennium Reserve is located in the Calumet region of Cook County, IL. Last week I spent two days touring some of the parks and natural areas that already have been established. Here is what I saw, one photo from each of the parks I visited.

This is my second visit to the Millennium Reserve and second photo essay. To see the previous one, click here.