Jackson Marsh: A Wildlife Area for all seasons 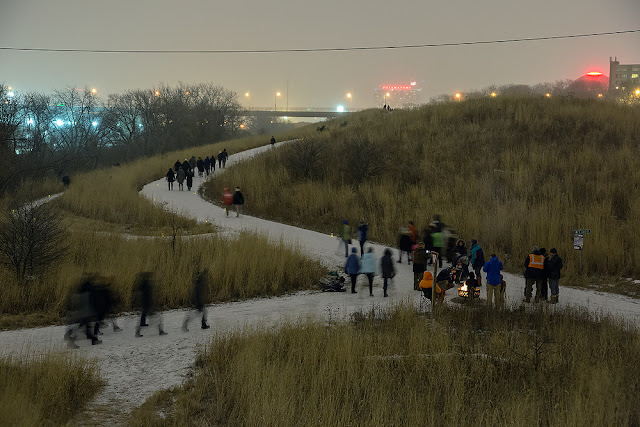 Excitement had been building for weeks for the second annual Urban Candlelight, which was held last Saturday, Feb. 3. After last year’s surprisingly successful inaugural event drew an estimated 2,500 people on an especially frigid night, expectations were high among the organizers. And those expectations were exceeded. 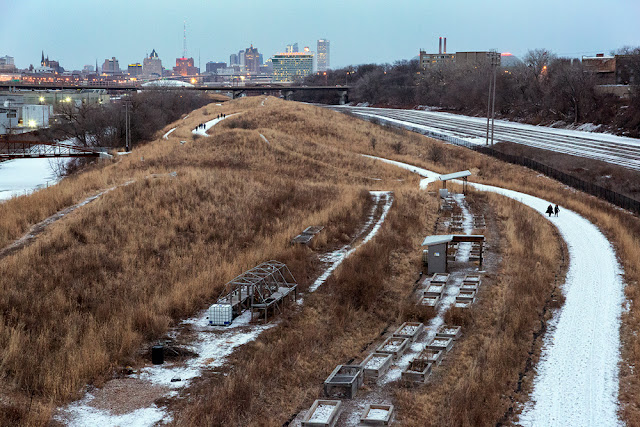 People began appearing on the Hank Aaron State Trail in Three Bridges Park before dark and the official start time of 5:30 pm. Light snow during the day had frosted the trail with a fresh white sheen. Before long the few early birds were joined by dozens and then hundreds. And they kept coming all evening. I don’t think I’ve seen the trail as crowded at any time of the year. 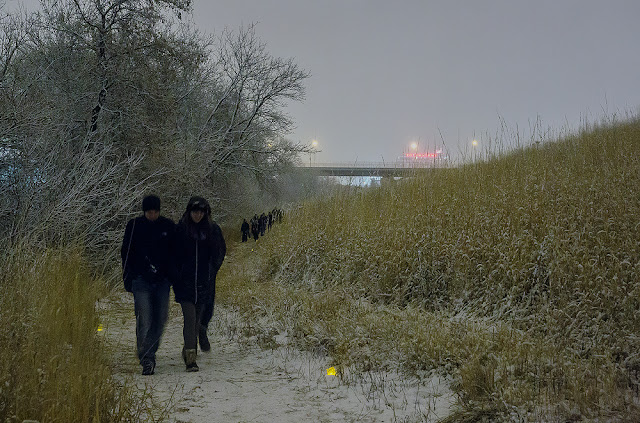 Almost as if planned, snow began to fall again as the event got underway. The falling snow coated hats, softened the landscape and made everything feel magical. The overcast sky glowed from city lights surrounding the park. It never got truly dark! 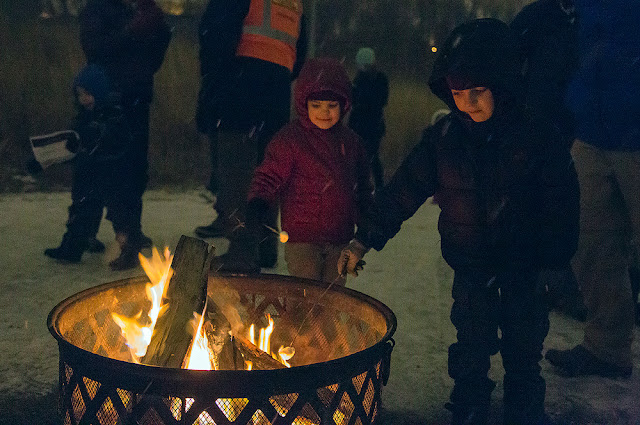 The event attracted people of all stripes. There were many families pushing strollers, as well as a few wheelchairs. I even saw a few bicycles in the snow.  Lots of dogs on leashes. Children ran up the hills and slid down the steep slopes on their snow pants. Marshmallows were roasted over bonfires. Selfies were taken everywhere along the trails. 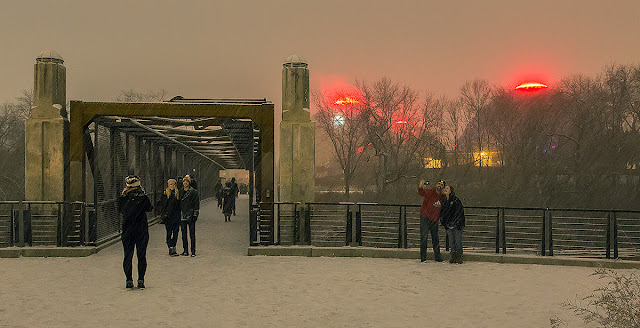 Many of the hikers were visiting Three Bridges Park for the first time. They learned, among other things, that the park stretches from the Mitchell Park Domes on the east to the Menomonee Valley branch of the Urban Ecology Center on the west. 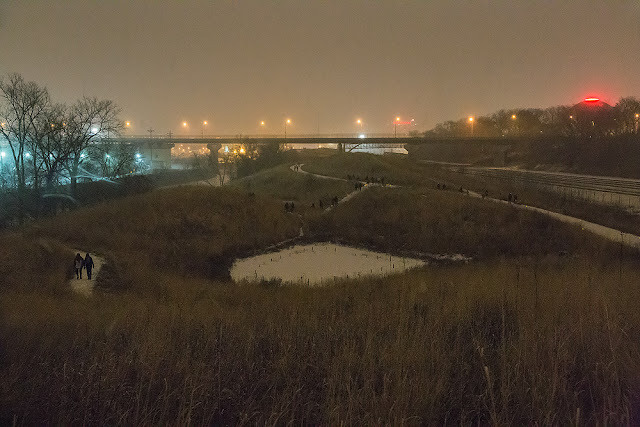 I haven’t yet heard an official estimate but those I spoke to were certain, as I was, that it would prove higher and likely substantially higher than last year. We do know that 1,100 adults pre-registered online even though registration was not required. And that number did not include all the children--or dogs! 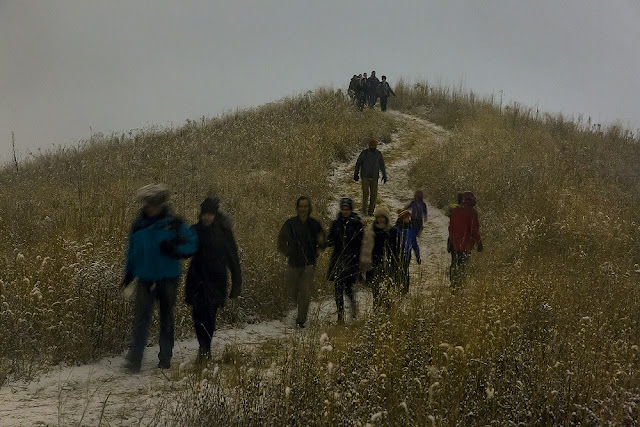 Thanks to the sponsoring organizations, Friends of the Hank Aaron State Trail, Menomonee Valley Partners and the Urban Ecology Center, for the effort involved in making this event so successful. 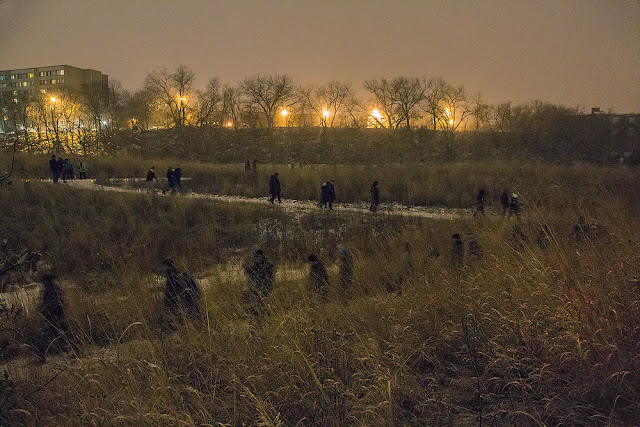 The conditions made photographing the event challenging, especially the blowing snow and so many of my images may seem a bit more impressionistic than usual. The lighting was particularly strange and not only because it was dark. The color of the overcast sky kept changing with whatever lights were nearby. 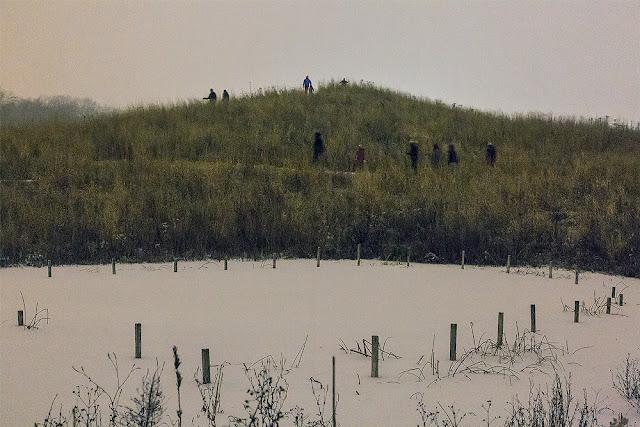 The crowds were so thick, as well as the falling snow, that I had no hope of running into anyone I knew. But I did. Several times. It was great to see y'all there! 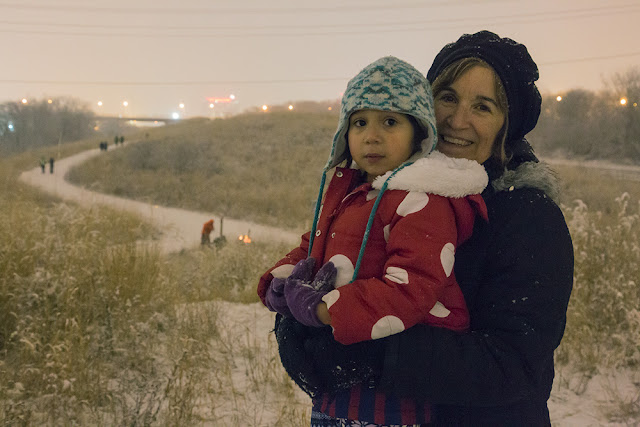 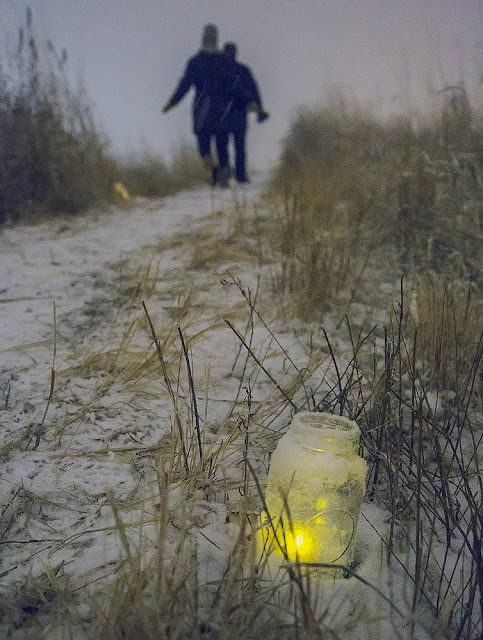 Full disclosure: I am on the board of the Friends of the Hank Aaron State Trail.