Marks and remarks from the Urban Wilderness

As I went out this morning light snow drifted slowly out of a clear blue sky. It was beautiful and mysterious, perhaps a portent on the cusp of a new year. Though if I believed in omens I might choose instead the coyote I spotted in the Menomonee Valley a few days ago. Instead of being sunny, a deep overcast was spitting sleet in spurts. The coyote's fur was sodden and dripping as it loped across the pavement in front of my car. It splashed in the icy roadside ditch, slipped through a chain link fence and on into the narrow field between the vast stadium parking lot and the railroad. The bent grasses amongst which it paused looked as bedraggled as it did. Above, I could see a steady stream of cars speeding by on the freeway. The coyote looked around briefly, then turned and slipped out of sight.

Some indigenous peoples of North America revere the coyote as the Creator. More commonly known as a Trickster, though, coyote may appear the fool or the clever impersonator. As I watched this lone, scrubby coyote disappear into perfect camouflage of its wintry surroundings, one thing is unambiguous - here is the wild incarnate. And, against what odds I can only guess, it lives in the heart of Milwaukee. The coyote may not in itself be the creator of the wild, but wherever it goes it does far more than impersonate what is wild. Coyote embodies the wild. To my way of thinking, that it can do this in the city is a good omen indeed.

In addition to my glimpse of the coyote, I caught many a photograph this year, as you may have come to expect if you are a regular to my blog. Three that I shot just yesterday near the Milwaukee River in Gordon Park accompany this post. 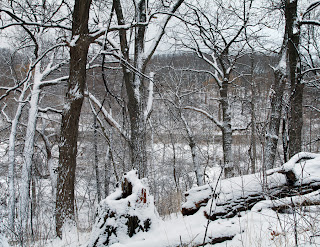 2012 was a year for the record books. Much of the reason was bad news. But as December draws to a close, I am mindful of a more hopeful report I heard this week that claimed this was a watershed year for at least one important reason. Due to several extreme climatic events, including Superstorm Sandy and the worst drought conditions since the Dust Bowl, the general public and the media finally caught up with scientists regarding the real and inarguable effects of global warming. 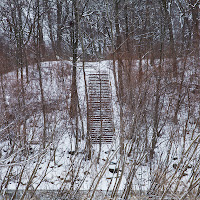 Here at Urban Wilderness I like to recall high points of the passing year, as do many of us. I feel fortunate to have been able to explore both near and far, to revisit familiar places and to discover new ones. There were a number of surprises along the way, which I recorded in posts throughout the year. Listed below, with brief annotations, is what I consider my best of 2012.

The most significant event of the year was the most personal, the loss of my mother at 87. In August I wrote about her influence on me and my love of nature: In memoriam

Other than that, my favorite moments, in chronological order:

The year began softly, in a January blizzard. My meditation on the day is called A snowy silence

In February I covered one of my most regular beats, the Milwaukee County Grounds with Ronald McDonald House plans expansion. Although the specific request by Ronald McDonald House was settled by the County Board of Supervisors in July (see my update), questions remain about the ultimate fate of one final corner of unprotected land.

Also in February, Historic Milwaukee held a forum called "Remarkable Milwaukee." I weighed in with What's remarkable about Milwaukee?

An illuminating trip to Houston, Texas inspired a trilogy of posts. The first installment is called Waking to a new world. (Links to subsequent installments follow each.)

In March I explored a new (to me) park in the Milwaukee County system : A warm gray day in Grobschmidt Park.

In April I was invited by the Great Waters Group of the Sierra Club to give a keynote address for their annual Earth Day celebration. Here is what I told them: Reflections on Earth Day

A new trail in the Cambridge Woods portion of the Milwaukee River Greenway generated controversy in May: Urban wilderness and accessibility

In June I visited the Chicago Wilderness along the Des Plaines River: The scent of summer

And a trip to Phoenix resulted in a two-part post: It's a desert out there! (A link to part 2 follows this post.)

In July I finally made a long-awaited pilgrimage to visit Aldo Leopold's shack on the Wisconsin River north of Madison: A visit to Sand County

There was wonderful news to report in September: A new branch of the Urban Ecology Center opens in the Menomonee Valley

In October, another two-part post, this time from New York City: The High Line: Good and Bad. (A link to part 2 follows this post.)

This was also the year when I finally got around to putting the finishing touches on a book too long in the works: The Milwaukee County Grounds: Island of Hope 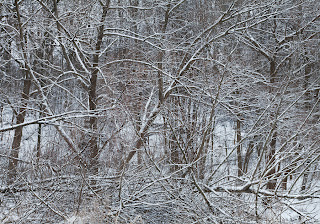 To commemorate the season’s first snow, late as it is, I have a short photo essay shot yesterday, mostly while it was coming down around me. Lovely.

Not feeling particularly insightful today, I humbly offer a selection of haiku that I’ve written over the years on the themes of snow and winter. To me haiku is less about writing and more akin to a spiritual practice. There was a time when I wrote one a day, but I’ve lapsed lately.

leaving the road
my footprints
in unbroken snow

morning mist
off the river
my breath rising

pulling off snowy boots
near the fire
my tingling toes

in the midst of blowing snow
a purple balloon
bouncing

Pedestrian bridge in the Menomonee Valley

I was sorry to have missed the installation yesterday of the first section of the new pedestrian bridge that will connect Mitchell Park (home of the domes) with the Menomonee Valley and the Hank Aaron State Trail. I won't try to repeat what others - who were on the scene yesterday - have written. There are two good stories about it in WUWM news and the Bike Federation's blog.

I tried to make up for not being there yesterday by going to see the second section of the three-part bridge installed. Here are a few pictures. 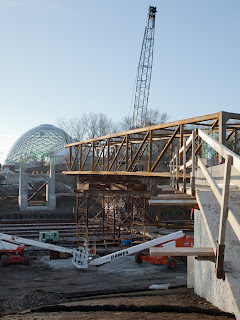 This is the section that was installed yesterday. I liked the idea of having the domes as a backdrop for the scene, so I hiked down to this site from the west end of the new airlines yard park. Initially that seemed like a good idea. Unfortunately, today's work took longer than yesterday's. As the sun rose the light changed and made the scene less dramatic. Still, the action was fascinating enough. 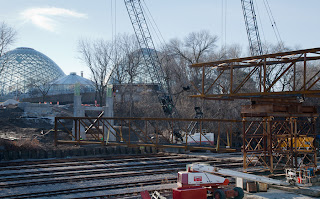 Utilizing two cranes, the crew is positioning the second section of the bridge over the railroad tracks. 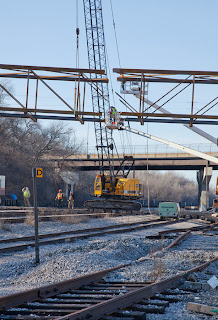 Bringing the new section in line to make the connection with the existing section. 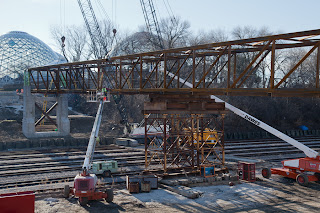 The two sections now erected are connected, making a single span over the tracks. 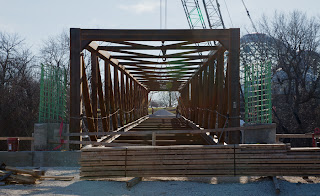 The view through the two joined sections towards Mitchell Park. 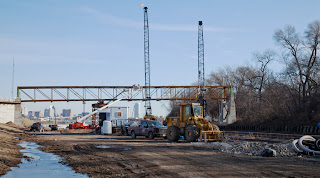 The third section, to be installed tomorrow, will complete the connection with Mitchell Park, to the right in this picture. Eventually, when it is fully operational, an extension of the Hank Aaron State Trail will run through the new park and cross over this bridge. From that vantage point will be a panoramic view of the Valley and downtown Milwaukee beyond. 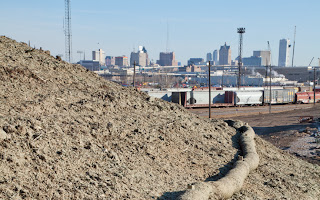 (Full disclosure: I am a member of the Friends of the Hank Aaron State Trail board of directors.)

The fog and the unseasonably balmy temps drew me outside this morning. I've always treasured days like today, surprise days, like unexpected gifts. Of course, "unseasonably warm" has taken on newly ominous significance in our post-Katrina and now post-Superstorm Sandy circumstances. Not to mention our own record-breaking drought.

Still, I enjoyed being out. I went to one of my usual haunts, the Menomonee Valley, to check on the progress of the Airline Yards Park. (To read about the groundbreaking of Milwaukee's newest park, check out my earlier post.) 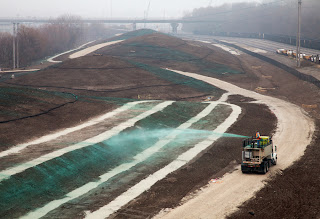 Luck was with me. A crew was out spraying what I assume to be fertilizer, or perhaps a seed/fertilizer mix, on the new contoured slopes of the park. 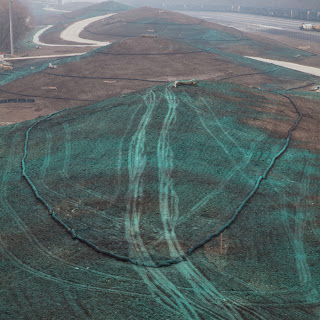 The Menomonee River was lower than I can remember seeing it, except during the height of the drought this past summer! Much is revealed in the shallows of an undernourished urban river. 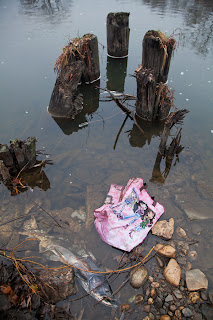 These last two shots are from the Hank Aaron State Trail, which runs through the Stormwater Park below the 35th Street Viaduct. 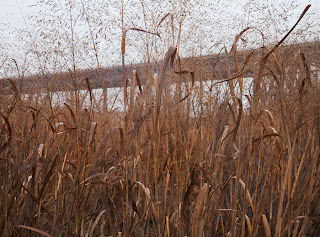 I've always loved how fog brings out the colors in the landscape - even the relatively monochromatic one we have in late autumn - or snowless winter. 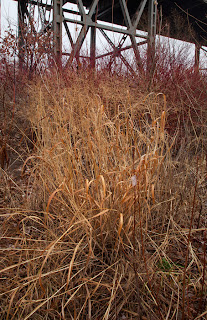 Although I enjoyed my excursion, I do hope the springlike weather passes and we get some snow.