Review of springtime in Milwaukee (Yes!)

Okay, Memorial Day is over and it actually feels like summer here in Milwaukee, after what felt like an interminable and frustratingly frigid spring. Well, for the most part. We did have a few nice days now and then, however fleetingly. I managed to take advantage of those nice days by visiting as many Milwaukee County Parks and natural areas as possible.

I made it to more than I usually do, some of them familiar and others for the first time.

I've selected a few shots from each, which I offer in no particular order.

I even tagged along with a team of scientists, including Julia, who works for the Parks Department as assistant natural areas coordinator. Here she is using a loudspeaker to call a lesser bittern (if I remember correctly) in the hopes that a real one will call back. None did. But we did successfully call other species that evening. 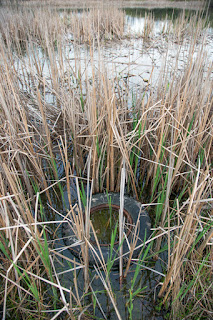 We visited the Lincoln Creek site, above, and this unnamed (and as yet unprotected) wetland where, although there were no bitterns, we discovered other creatures, including rails and a killdeer that had hatched a brood in the middle of a gravel parking lot.

(Sadly, that luxuriant ground cover is all garlic mustard. Pretty in spring. Soon to be very ugly.)

It was earlier in the spring and I'd never been to Falk before. What looks a bit like lingering snow are a carpet of tiny flowers called spring beauties.

Here's a close up of them. They are beautiful enough up close, but it was the sheer numbers that filled the forest floor in many parts of the park that I found astonishing. Such tiny flowers!

Most of these were brief excursions. Three of my adventures, however, merited blog posts of their own. Click on the links to go to them:
Cudahy Nature Preserve
Riveredge Nature Center (World Fish Migration Day!)
Mangan Woods 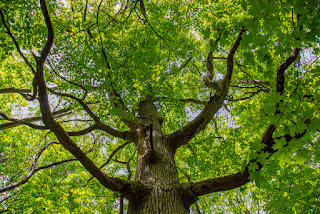 Mangan Woods is located between Whitnall Park and the Root River Parkway in Greendale. This lovely park is worth visiting any time of the year due to the healthy stands of mature hardwoods, like this giant maple. 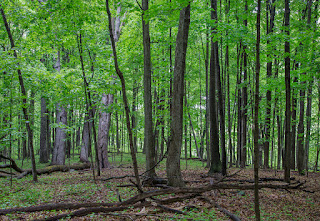 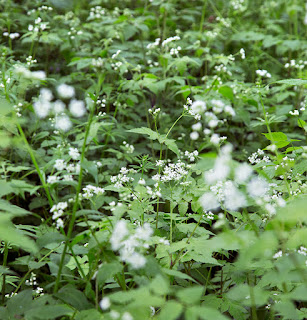 But spring is a particularly lovely time because of the remarkable wealth of wildflowers. Stay on the (well-trodden) paths because a stray step is likely to crush a beautiful flower. 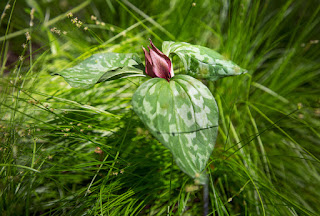 Along with the common white trillium, Mangan boasts the rarer and more delicate red trillium, here nestled among sedge. 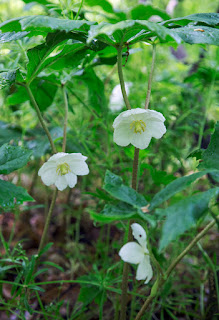 There were some patches of enormous may apples... 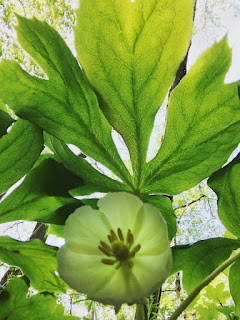 the blossoms of which are usually hard to see without groveling on the ground--although I found my iPhone a handy way to capture a ground-level view. 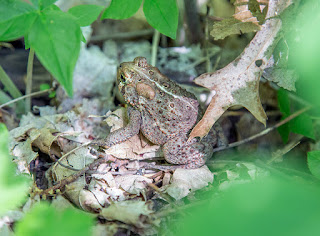 There is a lot of scurrying through the underbrush. The creatures mostly stayed out of sight, but this toad held still just long enough. 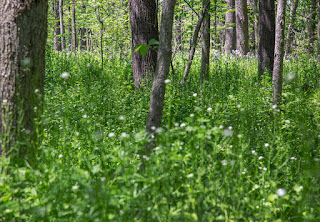 I hadn't been to Mangan for at least a few years. Since then, sadly, garlic mustard has taken over large swaths of the more open areas. I also found it popping up here and there in the deeper sections of the forest. 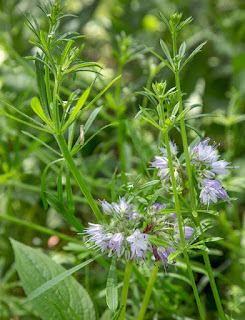 Here a Virginia waterlily is entwined in garlic mustard. 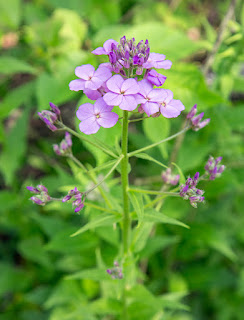 This is a lovely-looking specimen of Dame's rocket... 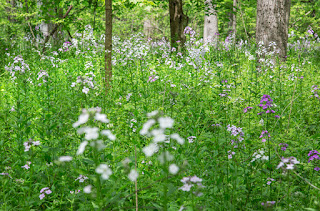 until you look around and see that it, too, is aggressively invasive. 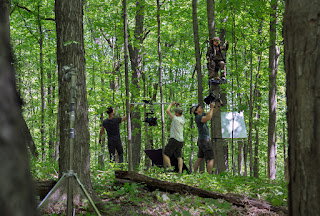 I also happened upon a more unusual alien species the day I was there. Nonbox, a Milwaukee ad agency, was filming a commercial for Shield, a huge outdoor sporting goods company. 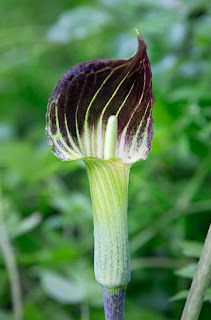 I came knowing that I was likely to find Jack in the pulpit blossoming this time of year, having seen them before... 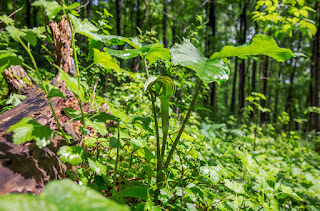 but I was completely caught by surprise at the sheer number of them, in open, sun-drenched places... 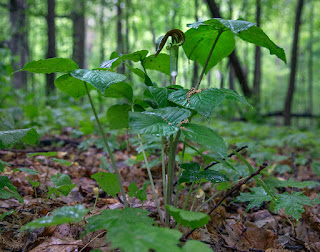 and also in the shadowy parts of the deep forest. 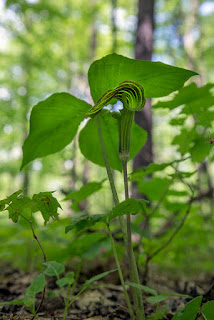 Not only did I see more Jacks in the pulpit than in any other place I can recall, but also the largest ones, which reached nearly to knee-level. 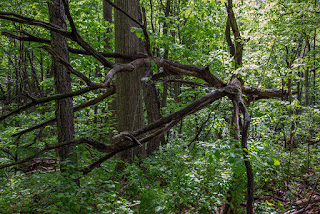 Mangan Woods, a dramatic and subtle place. I hope to return more often in the future.
Posted by eddee at 7:56 AM 2 comments: