I hope you'll join me for a discussion panel and special reception in conjunction with my current exhibition at Walker's Point Center for the Arts. 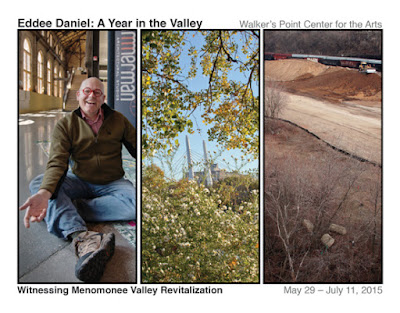 A distinguished panel of community leaders will be on hand to ensure a lively and informative discussion focusing on the various projects that are making the Valley a healthy and vibrant place to work and play.

The exhibition runs through July 11.

Walker's Point Center for the Arts is located at 839 S. 5th St., one block south of National Ave. 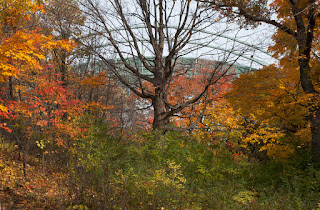 I wrote the following story approximately ten years ago when I was working on my first book, Urban Wilderness: Exploring a Metropolitan Watershed. It has always been one of my favorites. I reprint it now because after ten years I have just returned to witness another falcon banding session at the same location. This time I also went to four additional banding sites in Milwaukee. Stay tuned for the new story--and many more photos!

One hundred and twenty feet up the chimney of a coal-fired power plant, wind roars in my ears. Far below and all around are the signs of a century of enterprising development and subsequent decline. Black roofs mark the few remaining factories. Vacant parcels are littered with faintly twinkling glass. Tiny trucks pick and prod at a mountain of coal to feed the furnaces beneath my feet. They have the look of ants fussily tending an anthill. Across the canal in the city impoundment lot, carelessly arranged carcasses of abandoned automobiles lie atop the contours of a huge mound of gravel. In another direction lies their probable fate: scrap metal awaiting reclamation is being sorted into irregular piles.


This isn't the kind of setting one expects nature lovers to seek out; nevertheless, this vertiginous height is one of several area nesting sites for the once-endangered peregrine falcon. As such, it is a significant outpost in the urban wilderness—symbolic of a dramatic environmental success story—and I am witnessing as much wild fury as a pair of falcons can muster.


Tolerance of humans and adaptation to their synthetic environments has helped bring the species back from the brink of extinction, but tolerance has its limits. With no way to communicate their benign intentions, the banding team is provoking the falcons in the most distressing way possible, by raiding their nest and stealing their young. In a frenzy, the adult birds dive at us, swerving by as close as they dare. They circle around and dive again, screaming all the while in high-pitched desperation.


Greg, the naturalist in charge of the operation is getting an equally ferocious reaction from the fledglings in the nest. In what they only can perceive as a battle for existence, they simultaneously claw, peck, and struggle to evade his grasp with great feathery commotion. But it is a futile fight, as gloved hands deftly snatch each chick and transfer it to a waiting cage. All the while the parents continue the attack. Capable of speeds as high as 230 M.P.H., which makes them the fastest animals on earth—their intimidation is real. The larger female aims straight at my head, eyes blazing with passionate intensity. Just beyond reach, she stalls her headlong plunge with a wide sweep of her wings, talons writhing with frustration, and veers away.


Once in their lives these wild creatures must endure this violation because our society has decided to care whether they live or die. The look in their eyes is a clear sign that banding doesn't tame them, but it creates a platform on which we can build a case for mutual survival. In the urban wilderness, nature's indifference must be guided by humanity's care and stewardship. 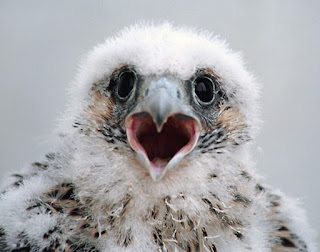 Once inside, identifying bands are applied expertly to the fledglings' legs. Held as gently as possible, they nevertheless struggle continuously. Sharp beaks and talons flex and strain, eyes glare with a vehemence born of panic. The banding team's calm, scholarly attention to detail belies a genuine respect and affection for the fate of the individual birds as well as the species. They are given names. Personalities are noted along with physical traits. All is done with such alacrity that we are soon back up on the chimney, returning them to the nest. No longer attacking, the adult falcons continue to circle, eyeing us suspiciously.


When I return to solid ground I turn to look up through a lattice of steel structures toward the tiny white nest box affixed to a narrow railing on the massive vertical form of the stack. Two even tinier black specks with wings whip around like torn bits of cloth whirling in an updraft. Then each circles the stack one more time, swoops gracefully up to the nest, and disappears inside. The only sound is the wind in my ears.

This story and the photograph of the Fledgling Falcon are from Urban Wilderness: Exploring a Metropolitan Watershed, Center for American Places at Columbia College Chicago. © Eddee Daniel 2008.
Posted by eddee at 3:04 PM No comments: 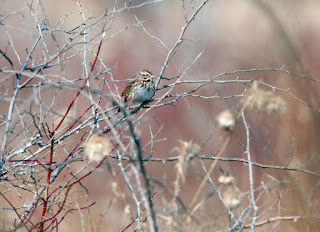 Should the Cudahy skeet-shooters remain in Warnimont Park? Should they be allowed to destroy one of the best sites for birding in Milwaukee County?

The Cudahy Sportsmen’s Club, a skeet-shooting club, have met in Warnimont Park on Lake Michigan for many years, but neighbors increasingly object to the shooting noise and the debris left in the lark and in the lake. The club is requesting a new location in the park, but opponents say the new site is too close to private houses and a hospital. The Audubon Society has voiced strong opposition because of the sensitive ecology of the proposed new site.

Read much more (and see more photos) in my earlier column in Milwaukee Magazine.

WHAT: Public hearing to discuss whether Cudahy Sportsmen’s Club may remain in Warnimont Park
WHEN: Wednesday, June 3, from 6:30-8:30 p.m. Public comments will begin at 7:15
WHERE: Cudahy Family Library, 3500 Library Drive, Cudahy 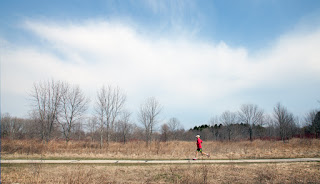