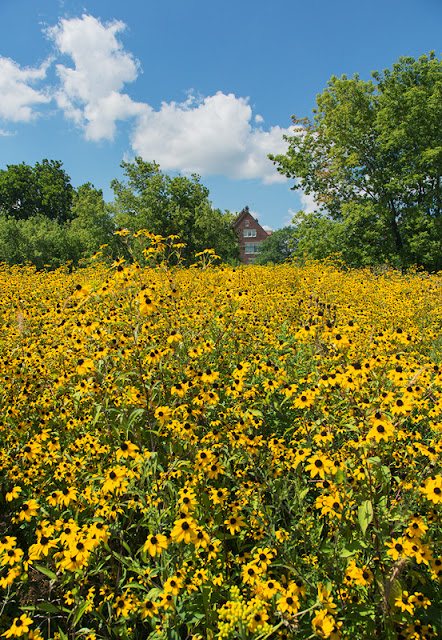 The Monarch Trail is an 11-acre protected butterfly habitat that circles around the Echelon Apartments on the Innovation Campus of the Milwaukee County Grounds in Wauwatosa. It is currently awash in a magnificent spread of brown-eyed Susans.

The Friends of the Monarch Trail held their annual migration season kickoff celebration yesterday. Despite periods of light rain a good crowd enjoyed displays about monarch and other butterflies, the remarkable story of the 3000 mile migration, and the significance of the County Grounds as a roosting site. For the first time the event was held in the courtyard of the Echelon Apartment complex, in front of the recently renovated Eschweiler-designed historic Administration building. In a sign of the growing popularity of the event the Milwaukee County Parks Department provided a traveling beer tent and Cousins dispatched a food truck. 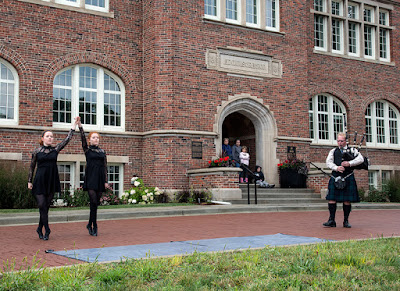 Ceole Cairde, the Irish ensemble, were on hand to provide musical accompaniment, as usual. A new feature this year was the McDonald family troupe of fife, drum and Irish dancers (above).

As if on cue, in the midst of all the merriment wild monarch butterflies quietly began to flutter into the courtyard and roost on the tree closest to the action (below). This bit of serendipity caused a sensation. Barb Agnew, the director of the Friends of the Monarch Trail considers it the precursor to what is likely to be an excellent season for butterfly watching. For updates on trail activities go to the Friends of the Monarch Trail website. 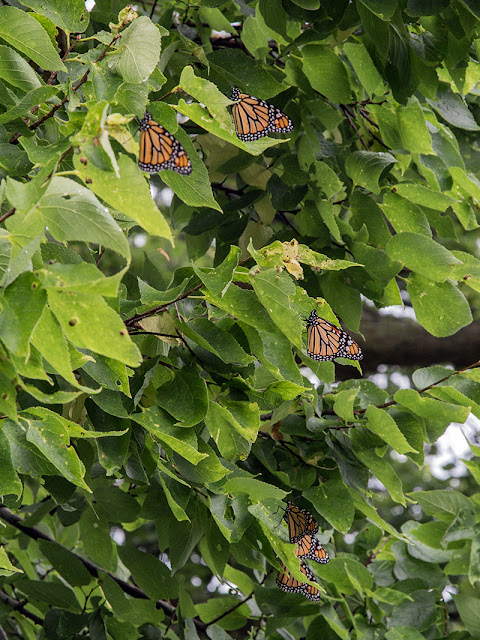 To see more photos of the Milwaukee County Grounds and Monarch Trail go to my Flickr album.
Posted by eddee at 8:30 AM No comments:

How does Milwaukee compare to the top-ranked Twin Cities? 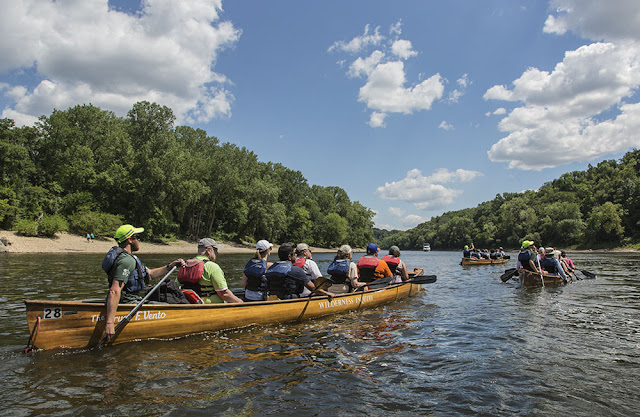 The sun rose above the tree line as I drove down the deserted park road and along a large, perfectly calm lake matted around its edges with floating vegetation. It was lovely and peaceful, with a familiar solitude that reminded me of our own Milwaukee River Greenway, a similar natural refuge surrounded by an invisible city. Then I heard a low, guttural rumbling, which grew suddenly into an earsplitting roar as a jet appeared over the tree line opposite the dawn as if rising to meet the sun.

This was not unexpected. I had arrived in Saint Paul the day before the City Parks Alliance biannual national conference was to begin there. I immediately opened a map on my phone to look for a likely green spot and latched onto Fort Snelling State Park. Nestled below the flight path of Minneapolis—Saint Paul International Airport, it clearly lay in the river bottom at the confluence of the region’s two major waterways, the Mississippi and Minnesota Rivers. 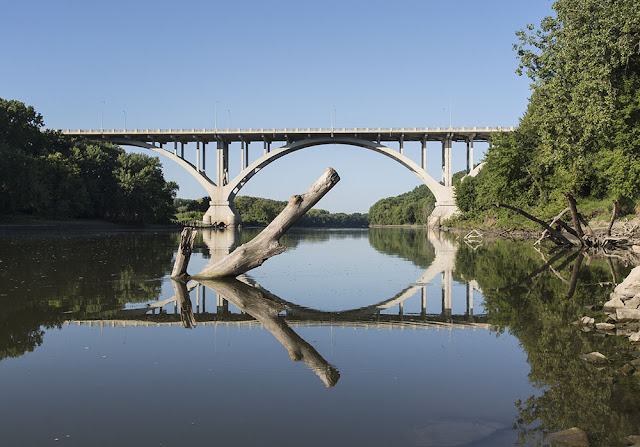 Looking for remote sections of the park, I drove to a dead end in the shadow of the freeway bridge I’d driven over to get there. Along the way I saw exactly one fisherman. From the boat ramp at the end of the road another was setting off down the river. I stepped into the woods. How often, I thought, have I had this experience in Milwaukee parks? Being essentially alone in the most densely populated part of a state. Footprints in the sandy riverbank, however, proved to be an omen for an imminent surprise. 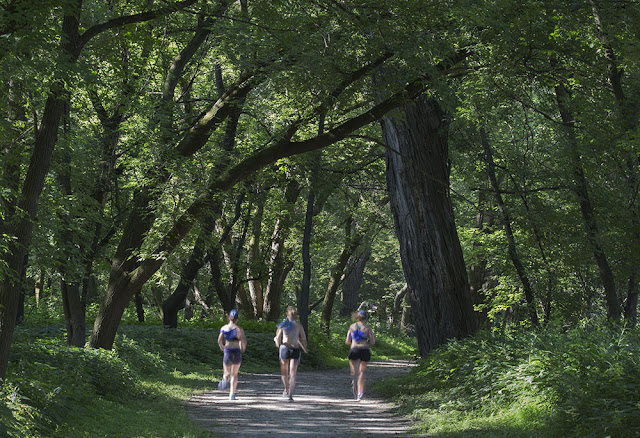 Long story short, within an hour I found myself on a wide, hard-packed earth trail around Pike Island being passed on both sides by joggers and dog-walkers. Although the island, accessible by a single footbridge, appeared to be the most remote part of the park, it was proving to be far more popular than I had imagined. By nine o’clock the now numerous fishermen were joined by a diverse army of people out enjoying the paths and beaches that circled the island. Welcome to Saint Paul, I thought. What a fitting introduction to a conference about city parks.

This essay was published by Milwaukee Magazine. Click here to continue reading.
Posted by eddee at 12:50 PM No comments: 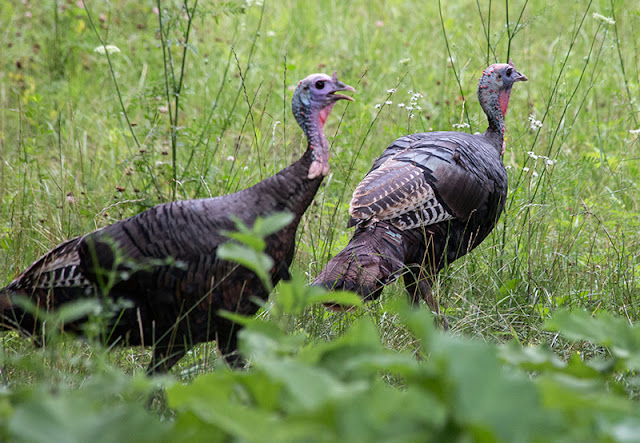 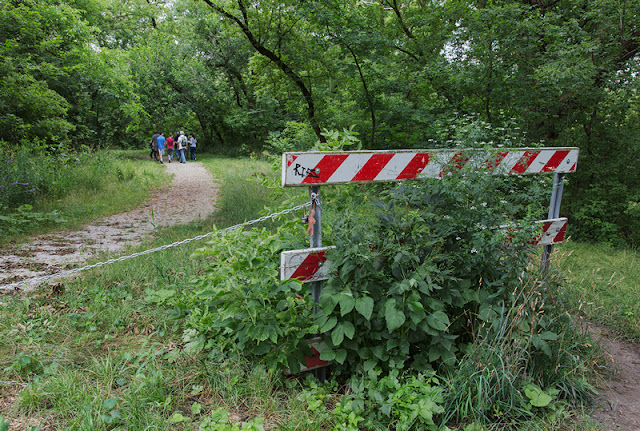 An inviting but unmarked gravel path leads you downward toward the river. Descending into the forest canopy, dense foliage closes in around you. With each step the light grows dimmer, the sultry air cooler. At the end of the gravel a muddy trail parallels the riverbank. It vanishes in both directions into the dark forest. Standing here now, you would never guess that this once was the site of a popular resort that drew thousands of people on a warm summer weekend like this one. 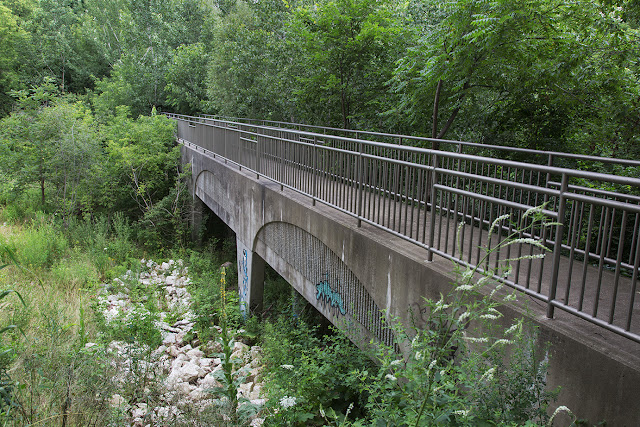 Even the name might surprise you, if you were to consider a name at all. There are no signs identifying Pleasant Valley Park. There isn’t even much of a valley; just an overgrown ravine crossed by a mysterious and apparently purposeless pedestrian causeway. (It's an aqueduct, but I like the notion that you can't tell when you see it.) What there is—in abundance—is a wide variety of plant life of all shapes and sizes. On a hot day after a storm, it is more like a steamy and vaguely forbidding jungle than one of Milwaukee’s premier attractions. 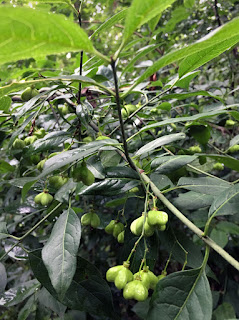 That’s what it was for about 80 years beginning in the late 1840s. On the shore of the lake impounded by the North Avenue dam, the resort included a pier, bandshell, restaurant, rentable cottages, extensive landscaping and a grand beer garden. Torn down a century ago, no sign of it remains save a concrete curb along parts of the gravel path. Referring to the resort, a Milwaukee Journal article dated June 8, 1928 quoted a real estate broker as saying, “Few of the younger generation in the city realize that there is a spot in the heart of the city that has such beauty.” 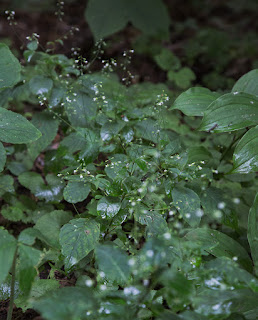 What an intriguing statement that is after nearly 90 years! Who today knows anything about Pleasant Valley Park? And yet many of those who do—including significant numbers of the current younger generation—recognize the beauty that is here, hidden in plain sight.

This story was published at Milwaukee Magazine. Click here to continue reading.
Posted by eddee at 12:42 PM No comments: