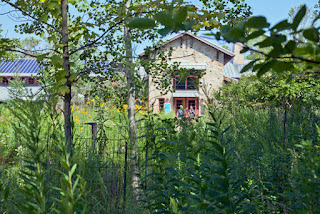 The Schlitz Audubon Nature Center, which is located on Lake Michigan in the northeast corner of Milwaukee County, is always a treat to visit. Yesterday was an especially good day, however, because admission was free to all thanks to the support of the Greater Milwaukee Foundation.

I spent a couple hours there and ended up wishing I could have stayed longer. It was a beautiful day and droves of people were taking advantage of the special event. 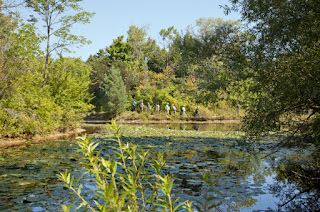 Activities included live animal displays, invasive species and poison ivy identification and guided tours of all parts of the diverse landscape. A master gardener was on hand to answer questions. 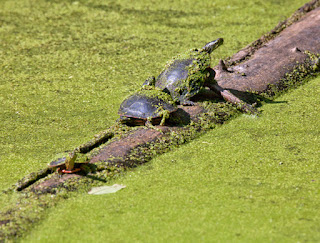 The day's special activities were scheduled to coincide with what's known as a "bio-blitz." This intensive inventory of all the species that can be identified in a 24-hour period had begun the day before. The BioBlitz was a joint effort between Schlitz Audubon Nature Center and the Milwaukee Public Museum. 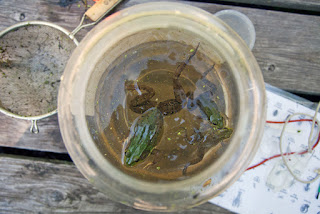 The live trap (below) holds what I was told was a Blanding's turtle, which is endangered throughout much of its range. Score one for the nature center, the BioBlitz and the species! (Once officially counted the turtle will be released.) 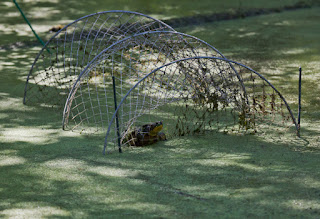 Families who came for the day were invited to explore woodlands, fields and ponds - with the expert help of Audubon staff members - for their own informal inventories. 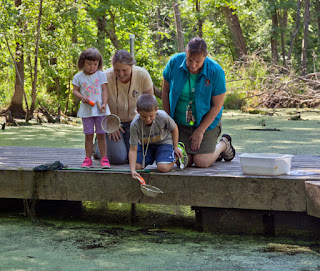 The best thing about the day, for this explorer of urban wilderness, was the beauty of nature itself. 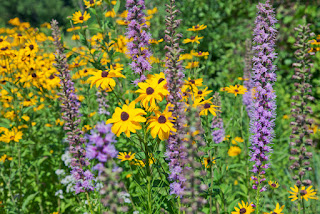 An urban hike along Milwaukee's lakefront with Brew City Safari

Brew City Safari was founded by Christian Matson-Alvirez three years ago. I love its tag line: "Explore. Imagine. Get lost." Its mission--to take people on hikes in Milwaukee--appears simple at first blush. Advertise a time, location and route and the people who show up take a hike.

I only just learned about it last week. Coincidentally, the next scheduled hike was the following Sunday (which was this past Sunday). I immediately decided to go, even though the time was a challenging one: 3:30 a.m. The route, however, was definitely appealing: a six-mile loop around Milwaukee's lakefront.

Followers of this blog will find it unsurprising that I was an immediate convert. Talking with Christian during the hike, hearing him wax eloquent about his love of Milwaukee and urban hiking, was like plumbing my own thought process. If you find this idea as intriguing as I did, check out the schedule of hikes on the website. There is usually one per month.

Here are a few photos from our hike. 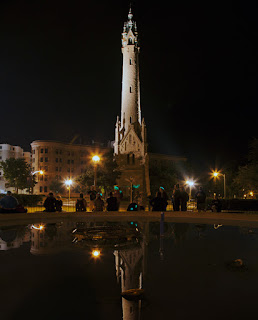 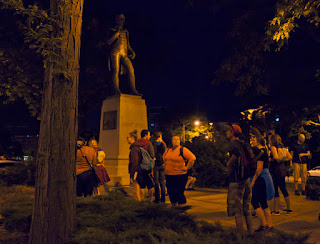 Poet Robert Burns in Burns Commons, at the intersection of Farwell and Prospect. Turns out Christian loves the arts as well as Milwaukee. How cool is that! 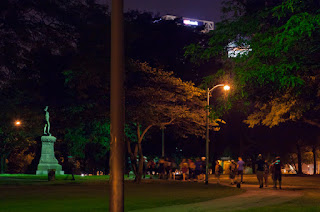 I knew there was a statue of Solomon Juneau in Juneau Park, which is only sensible, right? But we discovered Leif the Discoverer there as well. As far as I know he never made it to Wisconsin. Go figure. 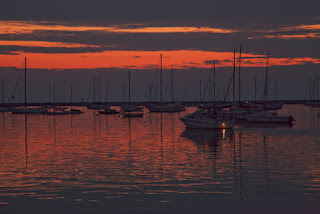 Still in the dark, we looped around the Milwaukee Art Museum. By the time we reached McKinley Marina the glow of pre-dawn lit up the harbor. 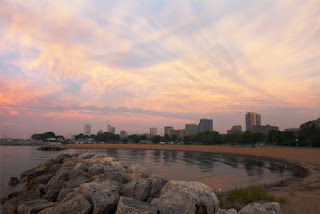 Looking back over McKinley Beach towards downtown just before sunrise. 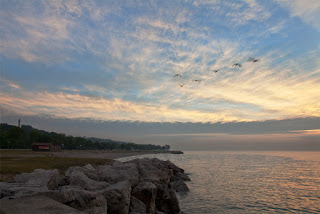 And north towards North Point and Bradford Beach. 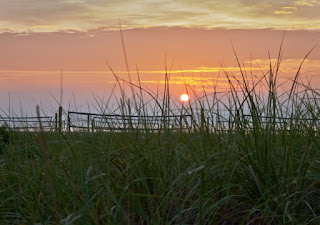 The sun made its appearance as we hiked along Bradford Beach. 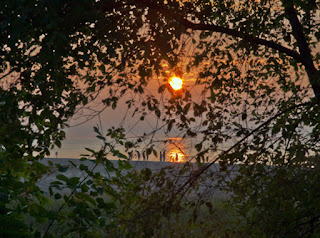 We were not the only people out to witness the dawn. At the north end of the beach we spied a group of revelers cavorting in the dawn light. 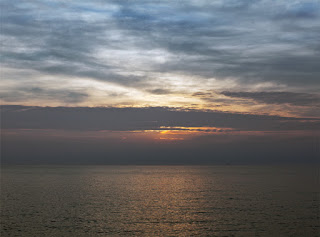 The dawn light proved fleeting as a new bank of cloud cover approached. We walked up the closed ravine road and made out way back to our starting point through Lake Park.

The next hike is Sept. 6, a Sunday afternoon stroll through the south side with special guest tour guide Adam Carr. Details on the website. 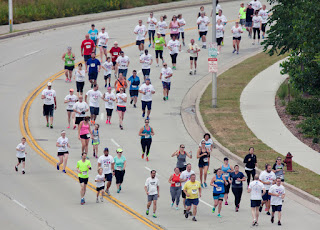 The annual fundraising Run/Walk organized by the Friends of the Hank Aaron State Trail was held on Saturday. The weather was great, attendance and spirits were high. I played my habitual role as photographer (which gets me out of running!) and I got a few shots to share. 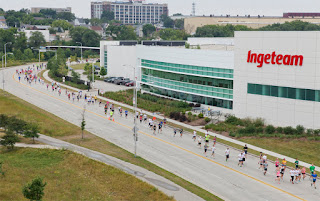 The course began at Miller Park and went down Canal Street as far as 32nd St. This is the view from the 35th St. viaduct of Canal St. early in the pack. 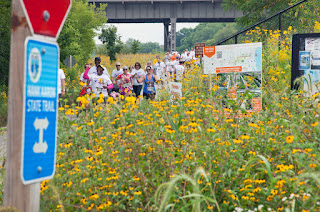 The course looped back through Three Bridges Park. 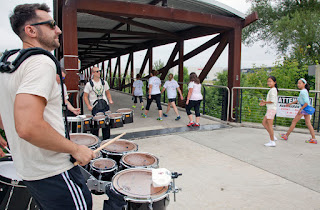 The Milwaukee Bucks' drumming corps was on hand at the Valley Passage Bridge to charge up the crowd for the final leg. 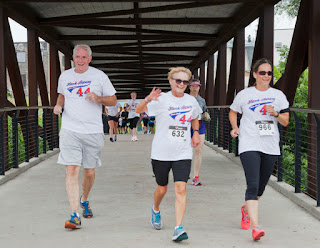 I managed to catch quite a few runners and walkers as they crossed the Valley Passage Bridge, including Mayor Barrett (left). 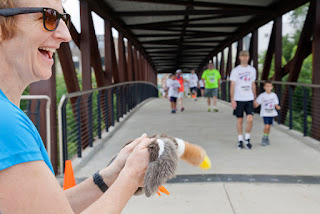 Pam, one of the volunteers added cheer to those crossing the bridge with her mascot, "Honk Aaron" the goose.

To see many more photos go to my flickr album. To learn more about the Hank Aaron State Trail, click here.

Full disclosure: I am a board member of Friends of the Hank Aaron State Trail. And happy to do it!
Posted by eddee at 5:43 PM No comments: