Down by the riverside: Art and activism in Milwaukee

A local artist holds a water vigil in solidarity with West Virginia following the chemical spill.

Melanie was waiting when I double-parked in the small lot next to the Milwaukee River Bridge in the Third Ward. Her breath came out like a cloud as I approached. But with rosy cheeks and a buoyant spirit she greeted me cheerfully despite her wait in the –11° wind chill. Near the end of Milwaukee’s Riverwalk she had set up a shrine on a small silvery table. The location, where the Menomonee River meets the Milwaukee, was chosen to maximize the symbolism of the vigil for which the shrine was intended. 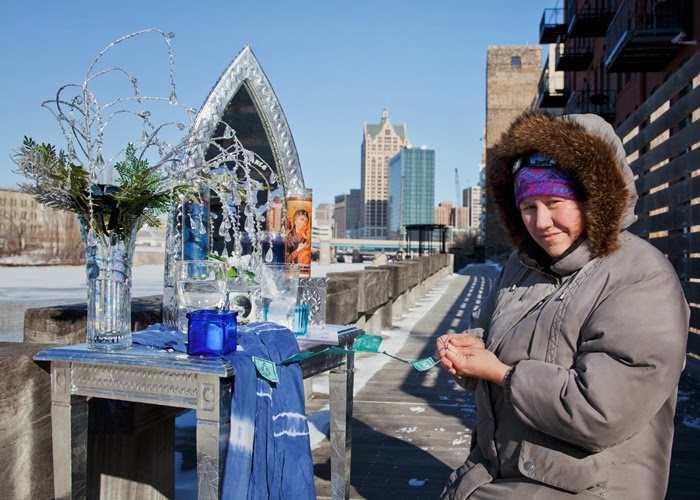 Because of the frigid conditions, the ceremony was brief and simple. Melanie knelt beside the shrine and stretched out a string of hand-printed prayer flags she had made for the occasion while I composed a few shots to document the vigil. Although no one else joined in, we were not alone on the river. We noted with curiosity the presence of ducks in a patch of open water. A pair of mallards and another of mergansers floated amid the steam rising off the river. Farther upstream a team of four coast guards were practicing winter water rescue from a hole they had cut in the solid ice.

Before I arrived Melanie had witnessed the passing of the barge that delivers coal to the We Energies Menomonee Valley Power Plant, taking note of the irony.

Melanie Ariens had invited me to participate and to document her Water Vigil. Nationally, the vigil was organized by 350.org, the global environmental activism organization founded by author Bill McKibben. On Tuesday, January 21 people around the country and the world were invited to “join in solidarity with West Virginians; to honor and protect all water!”

West Virginia, of course, is where a recent chemical spill polluted the Elk River so badly that tap water was shut down for thousands of residents in the capitol city of Charleston. A coal company was responsible for the spill.

Melanie told me, “I felt the need to participate in this vigil to show support from Milwaukee for those affected by the spill into the Elk River. It was the very small thing I could do. Imagine shutting down the water supply to Milwaukee for an extended period due to a chemical spill, then being told the water is ok, with only traces of the chemical in it. How would that make you feel about drinking it or bathing your child in it? It is a real statement of how unregulated and untested the chemical industry is.”

Melanie Ariens is not new to this combination of art and activism. A self-proclaimed “multi media artist, environmental advocate and volunteer community coordinator,” Ariens bills herself as an environmental artist. She has used the water shrine previously as an installation in other local waterways. She has a portfolio of digital images depicting a glass half full (or…?) on the Lake Michigan shoreline and in a variety of streams and other bodies of water. One of her best-known works is a wall-sized rendering of the Great Lakes in denim.

In her own words, “I make shrines, prayer flags, and other artwork as a way to honor the Great Lakes and freshwater. Making the work is a meditation for me, and hopefully an unusual presentation of an idea to get people to reflect on how important water is to life, and importantly to be stewards of this amazing resource.”

Ariens is both passionate and well versed on her issues. About the current vigil she said, “I know from the many years I have worked on pesticide reform that just because a chemical is listed with the EPA—in this case, 4-methylcyclohexane methanol—doesn't mean it has been tested; it just means they know it is out there. If we as individuals don't speak up and fiercely protect our water, abuse and contamination will happen.”

Ariens has a Bachelor of Fine Arts Degree from UWM, where she specialized in painting, drawing and printmaking. Now her work frequently includes multi media and installations. When not out in the landscape, she can be found at RedLine, Milwaukee where she is among the Artists-in-Residence.  ​

After about ten minutes at the shrine my gloved fingers were stingingly numb; my face and feet not far behind. Melanie, who had been there a half-hour longer, was holding her prayer flags without gloves. Her enthusiasm never flagged however and her smile was radiant. When we finished and started to disassemble the shrine we discovered that the half-full glasses of water had frozen to the surface. We pried them loose and tossed the remaining water into the river below.

In addition to posting them here and on Facebook, two of our images have been uploaded to a flickr page set up by 350.org to demonstrate solidarity and share the spirit of the event. When I checked just before posting this there were 182 images on the site. To see them click here.

For more on Melanie Ariens go to her website. 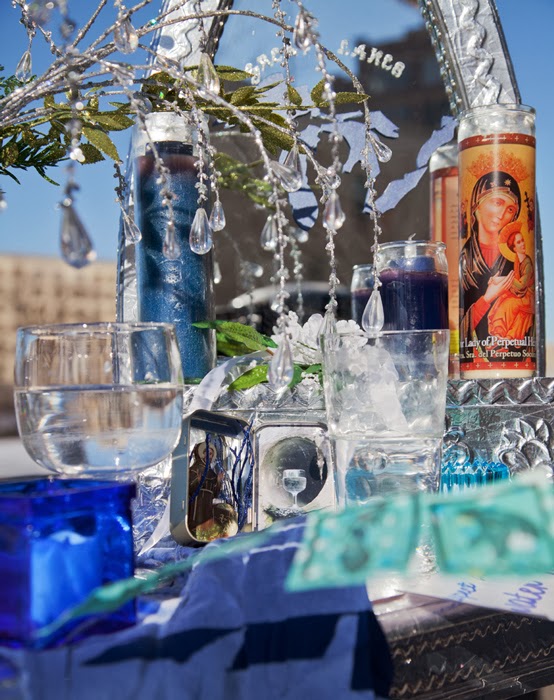 3 Bridges Park is a contender for a MANDI Award