Redefining the wild in an unlikely urban wilderness 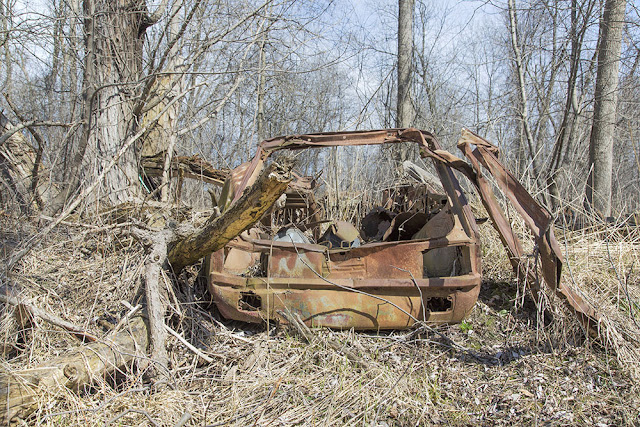 It’s a little hard to imagine a place in the City of Milwaukee that you might consider remote. I’m not talking about a place you have to drive a long distance to reach. I mean a natural landscape so secluded and, yes, wild that you wouldn’t expect to encounter another person there—unless they were doing something illicit.

There is such a place. It lies at the end of a long hike on trails next to the Menomonee River from my house to just shy of the Waukesha County line—or the short hike described here. The story of my first encounter was moving and memorable enough to include in my 2008 book, Urban Wilderness: Exploring a Metropolitan Watershed.

I don’t go back often. It’s not that I avoid the place—although fear did seem an appropriate reaction when I first discovered it over a decade ago and indeed there has been little enough reason to change my initial impression in subsequent years. Unlike other secluded spots in Milwaukee’s parks, I haven’t found it to be a peaceful destination. But a kind of morbid fascination draws me back now and then.

It’s been quite a while since I’ve last seen it. A cold, dreary week has given way to sunshine. I decide to see if another visit will reveal any fresh abomination. 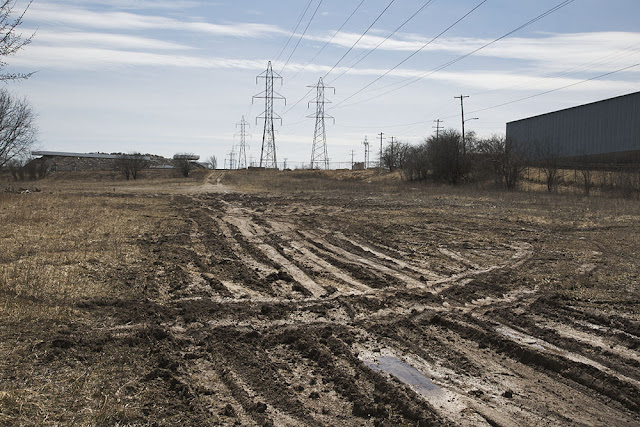 I turn into 119th Street, drive past huge piles of recycled asphalt and gravel and park between a trucking terminal and a packaging plant near the dead end. The chain link fence between this industrial hinterland and the backwoods along the river has long been breached—wide enough for thrill seekers to ride 4-wheel drive trucks through. Today the mud leaves no doubt that the practice continues. 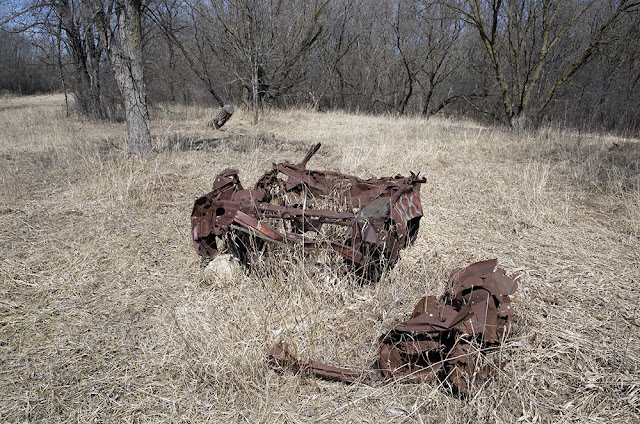 Near the bottom of the slope, just before reaching the river, I come upon the wreckage of some unrecognizable vehicle. An omen, perhaps, for what lies ahead—or an unwitting monument to the occasionally fatal consequences of our actions.

The deep truck ruts end abruptly near the river at the verge of the forest. A dirt road once continued on through the trees. Deeper ruts here are mossy and overgrown. Timbers have toppled across the still visible passage. I take the footpath that lies closer to the river.

Animal tracks stipple the soft earth of the trail. But, surprisingly, there are no human prints. Plenty of people are out taking advantage, as I am, of a warm, sunny Saturday in Wisconsin’s fickle spring. I saw them in a constant stream as I drove along Menomonee River Parkway—jogging and biking; many simply strolling. The playgrounds were packed. 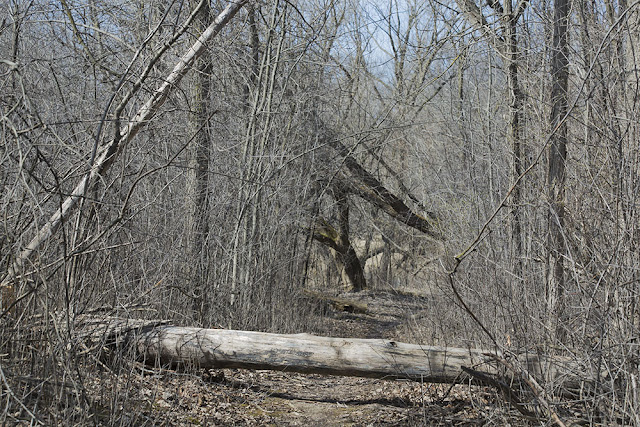 I knew this place was off the beaten path, but I didn’t expect to be so completely alone. As if to drive home the point, I have to step over a large trunk that blocks the trail. The colorless forest grows steadily wilder—the trees more twisted, the underbrush increasingly tangled and impenetrable.

The land rises along a steepening riverside escarpment. Mountain bikers have altered the trail: banking curves, kicking up gravel, compressing the earth. But the tread marks are faint, strewn with decaying leaves. No one, it seems, has cleared branches and other debris that fell over the winter. The sense of isolation deepens. 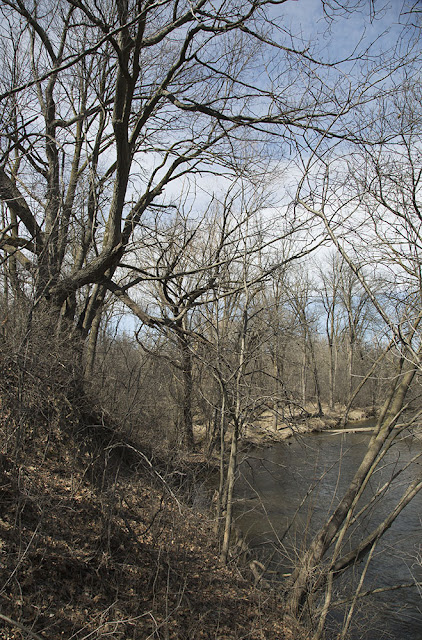 Reaching the summit, I see ahead the familiar river bend and the dell that I know to be the journey’s end—in more ways than one. The barren trees make it look desolate. For the moment, however, bright, inviting afternoon sunshine dispels the sense of impending doom.

I gaze down the steep drop into the dell. There in prominent view lie the hulking remains of an old van, looking more casually forlorn than its violent end might suggest. I pick my way gingerly down the muddy slope and slowly circle the van. It is no less obvious an intrusion, and yet somehow less repugnant than I remember. Fresh graffiti adorns rear and side panels, rust has etched deeper into unpainted steel, and the whole thing seems to have settled into the ground. Drab, snow-matted grasses appear to crest like static waves over the mired vehicle. 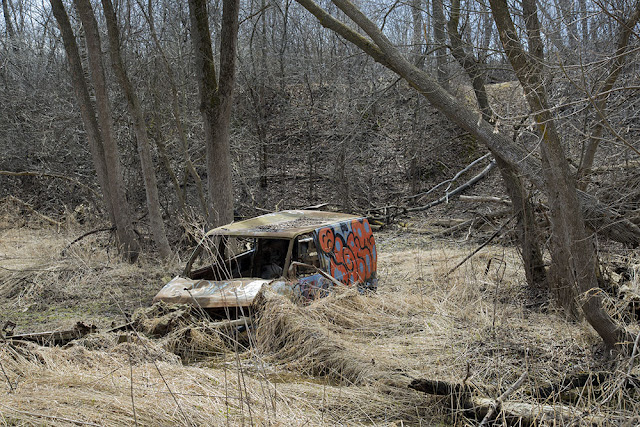 I step carefully. Like a maze of booby traps, the matted grasses hide additional chunks of even more corroded steel; an engine block here, an axle there, several wheel rims and the skeleton of a chassis. Aside from the risk of a twisted ankle, it all looks remarkably benign compared to my memory of the time when I first encountered it. Then this was a veritable battlefield. The various car parts, hoods, door panels, and odd bits of sheet metal had been placed deliberately and strategically around what was open, uneven terrain, scoured by floodwater that had washed over the oxbow in the river.

All of it—trees and the rock-strewn ground as well as the makeshift fortifications—had been completely spattered with colorful splotches of paint. No trace of that remains. I guess no one comes to play war games any more. 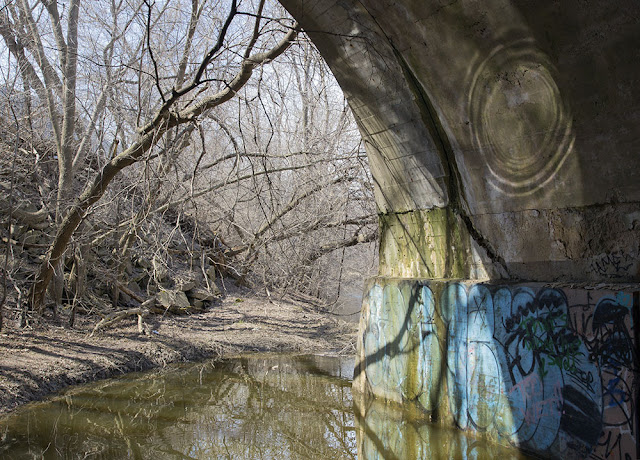 I find the mountain bike trail, which loops around the circumference of the oxbow, and leads me to the secret of the dell’s remoteness. I am confronted with a massive expanse of concrete—a railroad bridge resembling a medieval fortress. A long freight train rests silently on top. The river emerges through three arched openings. This imposing rampart, along with the private property of commercial enterprises on the opposite side, effectively thwarts entry from nearby 124th Street. 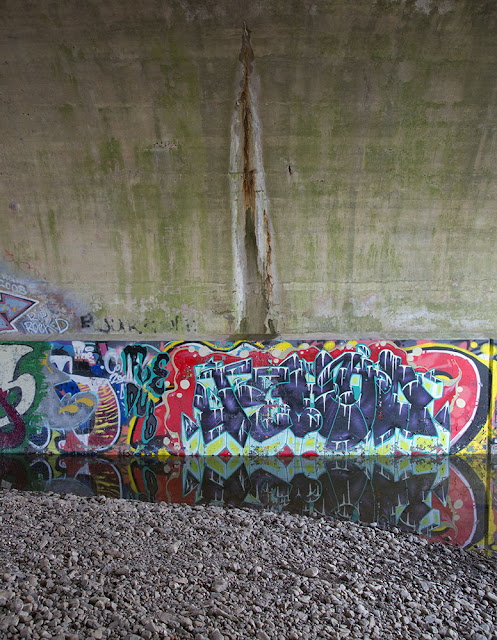 A continuous frieze of graffiti decorates the lower sections of concrete. But this too, like the trail and the “battlefield,” looks tired and dingy. Even the freshest-looking paint has started to peel. Seams in the concrete weep and run, staining the tags as well as the walls.

I head back to the dell to look for my favorite car, an ancient Gremlin I once photographed when it was iridescent with pink and chartreuse paintball paint. Even knowing where to look it’s hard to find. The rusted relic nestles among fallen logs, more akin to the patient earth beneath it than to the automobile-enamored culture that created it. 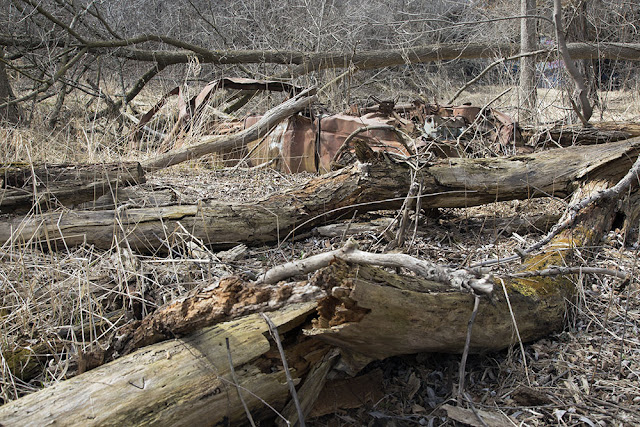 Nearby I find a smooth log and sit; close my eyes and turn my head towards the sun spilling all around, welcoming a solitude from which the demons have been expelled. Nothing, essentially, has changed. No one has come to remove wreckage or wash off graffiti. But despite the lingering evidence of abuse and degradation, it all seems paradoxically more natural than before. Against all odds, it is finally peaceful.

This story was first published by Milwaukee Magazine on April 11, 2017.


As I post this photo essay the weather has suddenly turned cold and nasty again. Yes, it's still that kind of spring. But you would be forgiven if over the past weekend you thought we'd skip that and go straight to being nice and warm, sun shining and flowers blooming. Because it was, if only briefly.

My weekend began at dawn (top) in one of my favorite places along the Menomonee River Parkway, near where it ends at the county line. I went looking for migrating geese, which I've found there in abundance in the past. No luck with that this time. But the dawn itself was worth the time.

Later, I explored the Donges Bay Gorge Natural Area, which was new to me. I never would have found it on my own, either. I came across it on the Ozaukee Washington Land Trust website and I stopped to check it out on my way to an event at the Lynden Sculpture Garden, which is nearby.


It's not only hard to find without a map or directions, but when I got there I discovered that they don't expect a crowd. The dirt parking lot has room for only three cars.

It also isn't a very large natural area. The trail, called "Wendy's Trail" for reasons that are not revealed on the signage, runs along the rim of the "gorge," which is similar to many of the other ravines that can be found all along the shores of Lake Michigan. Wendy didn't like to hike down into the ravine, apparently, for the trail doesn't go there. After a short walk I reached the bluff overlooking the lake, where Wendy sits down on one of two benches provided for her.

It was lovely, though. The scent of pine and solitude, along with surprisingly warm sunshine, were reason enough to go there.

On Sunday, I returned to another of my favorite urban wilderness haunts, the Milwaukee River Greenway.

The scenery is still largely devoid of leaves...


The Milwaukee River Greenway is a series of mostly named public parks, although some of the names are unfamiliar to all but the initiated. Take this one, Pleasant Valley Park, aka Blatz Park. Its "valley" is another one of those ravines, only this one leads to the river instead of the lake. When the river was in fact a lake, backed up behind the North Avenue dam, this park was an exotic resort. Steam boats pulled up at a dock here and crowds of passengers poured out to partake of its beer garden. You would never imagine this if you go there now. (Read all about "the forgotten Milwaukee River park" in Milwaukee Notebook.)


Until recently, when the steep slope of one side of the "valley" was denuded of trees in order to save it, the most notable and quirkiest thing about this ravine was the pedestrian causeway that crosses it for no discernible reason. Now, the view from the causeway of the bank stabilization effort draws one's attention, as would a person who had shaved one half of his head and left the other in a tangled mat of unkempt hair. "But it will grow back" is probably the polite thing to say.

What I can't figure out here is whether or not the beaver was in on the joke or if the joke was on the beaver. I'm trying to imagine the moment when the beaver had just gotten far enough through the trunk that the remaining fibers started to tear apart. How far, I wonder, does a beaver back off at that point? It couldn't possibly have guessed that, instead of crashing straight down over the edge of the river, as it normally would, the whole tree would suddenly catch in the crook of another tree and spring up like a mouse trap. I had to ask myself, did the beaver lose a tooth? Or its head!

I hope you enjoyed your weekend as much as I did. And may spring return soon!

To see more photos of the Milwaukee River Greenway, go to my Flickr album.