I hope you'll join me this Saturday for the second annual Urban Candlelight Hike in the Menomonee Valley. Last year, despite frigid temperatures, we had an overwhelming response when thousands turned out for the inaugural event. Click here to read all about that. This year should be even better!

Here, and below, is the pertinent information:

Where: Three Bridges Park, the Hank Aaron State Trail and the Urban Ecology Center in the Menomonee Valley


Bundle up and experience an exciting winter adventure!

For the second year in a row, hardy northerners will cure their cabin fever at this winter Urban Candlelight Hike in Three Bridges Park.
Hosted by:

Fun Pass is $10 in advance and includes one adult and all kids under 12 attending with the adult
*= only available for fun passes purchased on or before February 2.

This and additional information can be found at the Urban Candlelight Hike website.


Additional images from Urban Candlelight Hike 2017 can be found in my previous blog post.

Full disclosure: I am a board member of the Friends of the Hank Aaron State Trail, which is among the partner organizations responsible for this event.

County plan would charge $3.50 per hour to park in 76 parks and parkways.

The following op ed by Preserve Our Parks president, Jim Goulee was posted in Urban Milwaukee and is reprinted here with permission:

Imagine having to pay to park your car each time you go to a dog park, play golf, take your children swimming, play a game of tennis, soccer or baseball, take your kids to a tot lot, attend a picnic, enjoy a beer garden, or simply sit and observe nature.  These are only some of the occasions when you would be required to pay a fee to park your vehicle in one of Milwaukee County’s beautiful parks.
The 2018 adopted budget for Milwaukee County Parks System includes $1.7 million to be derived from new parking fees that would be incorporated in numerous parks and parkways. The County Board will soon be considering the proposed installation of metering and payment devices in as many as 76 parks and parkways for up to $3.50 per hour.

When this unfortunate idea was presented by County Executive Chris Abele in his version of the 2018 budget, many thought there was no way the County Board would go along with it. Sadly, they did.  To make matters worse, the budget did not include any working capital to accomplish this task. A small Pay-to-Park Workgroup was commissioned through the budget to study the paid-parking issue and make recommendations to the County Board. An informational report by that entity will be presented at the Parks, Energy and Environment Committee meeting on January 23rd. This group includes predominantly County employees, with very little representation by citizens.

Based on meeting notes acquired through the Budget Division of the Milwaukee County Department of Administrative Services, the Pay-to-Park Workgroup will recommend that the County award a contract to an outside parking vendor willing to invest in the necessary infrastructure and provide ongoing management, collection, and enforcement. It will also recommend that the contractor pay a base fee and a percentage of parking revenue to the Parks Department.

The City of Chicago did something similar a number of years ago for their city-wide parking. Chicago now receives only 10 percent of all revenue derived from parking. The other 90 percent stays with the contractor. There have been countless reports about how much both citizens and government officials loathe this onerous privatized contract.

It is interesting to note that during their deliberations, the workgroup has identified as many as 2,500 potential parking spaces that could gross as much as $3.1 million dollars at $3.50 per hour. It was not apparent from the workgroup notes how they calculated the gross revenue figure. Did they factor in any firm number regarding parking-space occupancy rates? Did they consider that many park goers would find alternative free parking in neighborhoods adjacent to parks and parkways? Have they determined the effects this might have on other revenue-producing entities such as beer gardens, the Domes and Boerner Botanical Gardens; athletics such as soccer and Little League; or the impacts on the health and well-being of many who will find themselves priced out of visiting parks they have long loved? Did they factor in the inevitable parking problems and bad will within adjacent neighborhoods when streets become inundated with cars of park users? These are questions that must be answered before the County Board can make a decision whether to allow the Parks Department to actively seek bids from parking contractors.

Let’s assume that the nebulous $3.1 million in gross revenue from parking fees in parks is attainable. A contract similar to Chicago’s would net the County a 10 percent return which would be $310,000. Even if the County could negotiate a contract that doubles Chicago’s return, or 20 percent, the revenue would still be over a million dollars short of the budgeted $1.7 million dollars needed for the Parks to attain their revenue target.

To date, this bad idea has been discussed and planned behind closed doors without much in the way of public input. Preserve Our Parks, a local parks advocacy group, feels that it is time for all citizens to have their say in this paradigm change in the way our parks are managed and funded. The public will have two opportunities to speak on this issue. The Parks Energy and Environment Committee of the County Board will hear comments at their meeting on January 23rd at 9 a.m. in Room 210 at the County Courthouse. There will also be a meeting for the public on the issue at the Domes Annex on February 6th at 6 p.m.

Since the founding of our once-envied park system, citizens have enjoyed unfettered access to our parks whether by foot, bicycle, or motorized vehicle. Now the politicians who represent us are attempting to reverse that course. They need to consider very carefully that how they proceed on this poorly conceived issue will resonate loudly with their constituency.

Full disclosure: I am on the board of Preserve Our Parks.

Sweeping changes to public lands in Wisconsin may come from a request before the Natural Resources Board to change its rules and allow State Parks Master Plans to be ignored. This would open the door to private development within parks and public lands. Please read my letter below and feel free to use it as a model for your own. Letters should be sent to the two officials listed below. To read more about the issue read James Rowen’s article in Urban Milwaukee.

I am writing in opposition to the request for a rule change that would allow State Parks Master Plans written before 1996 to be dismissed.

As you know, this request is on the agenda for the January 24 meeting of the Natural Resources Board. Please register my opposition to the request.

Furthermore, I understand that there is an effort to close public commentary after January 19. I also oppose the rule change that would allow this to happen. Decisions like this one must remain transparent and open to public debate and input. The public has a right to a hearing on this rule change and a right to have enough time to learn the issues and to prepare responses.

The rule change that would allow a park’s master plan to be ignored would enable a private company to use State Park land. The request seems to specifically target the Kohler Andre State Park’s Master Plan, written in 1989, in order to permit a controversial golf course proposed by the Kohler Company to encroach on public park land. No part of this beautiful, ecologically important and popular park should be sacrificed to any private development.

However, a rule change as sweeping as this one would have consequences far beyond Kohler Andre State Park. It would open the door to further loss to private interests of treasured public state lands.

The Department of Natural Resources and the Natural Resources Board ought to be the guardians of Wisconsin’s parks and public lands, protectors of the both the public interest and the natural environment. I urge you to reject this and any other request that would diminish or degrade public lands.

Send your emails promptly to Laurie Ross and Daniel Meyer. Time is of the essence.
Laurie J Ross, Natural Resources Board Liaison
Laurie.Ross@wisconsin.gov

Daniel Meyer, DNR Secretary
Daniel.Meyer@wisconsin.gov
Posted by eddee at 5:41 AM No comments: 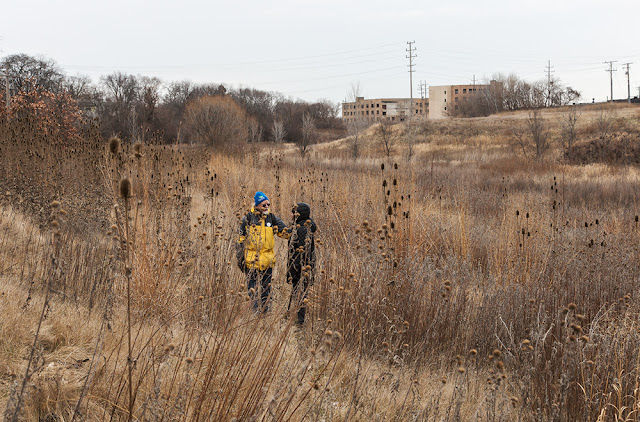 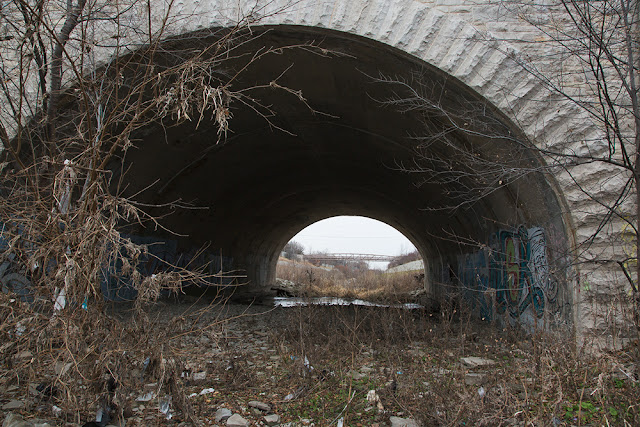 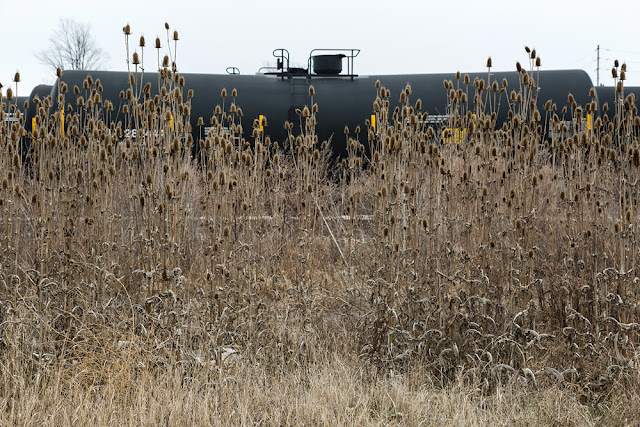 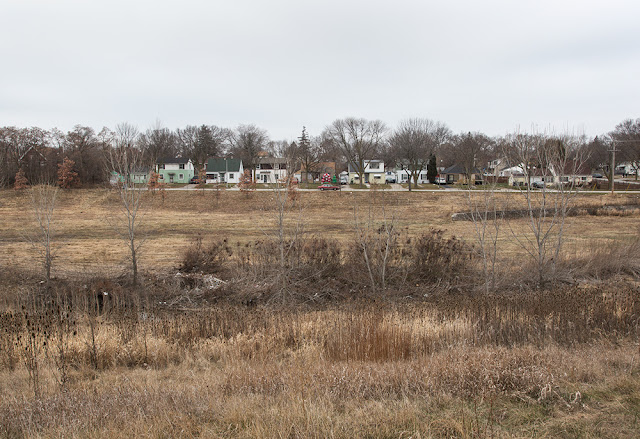 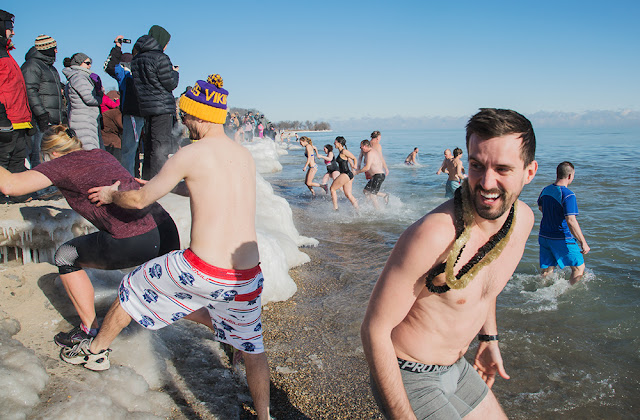 The deceptively brilliant sunshine was beautiful, but no match for the frigid air. The thermometer was at a near record cold, around 2°, with a wind chill reported at -22°. That did not stop the many dozens of would-be polar bears from plunging, nor the hundreds of spectators who lined the frozen shore. 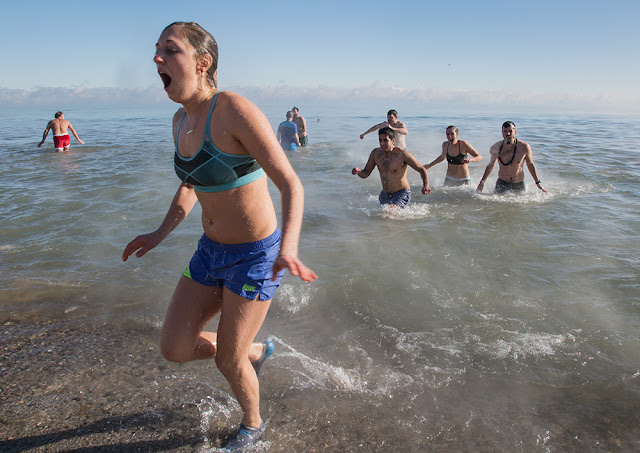 Actual polar bears, of course, are well adapted to their natural arctic habitat and superbly insulated with a double layer of dense fur. The nearly naked human bodies that made the plunge into Lake Michigan’s approximately 33° water were clearly not so well adapted. While those who chose to partake entered the water bravely enough, a quick plunge left many gasping in shock. 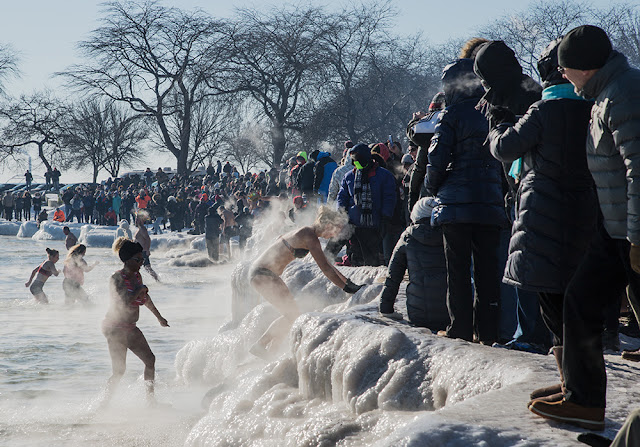 Steam rose eerily from the warm bodies as they climbed from the water and dried off before dressing. 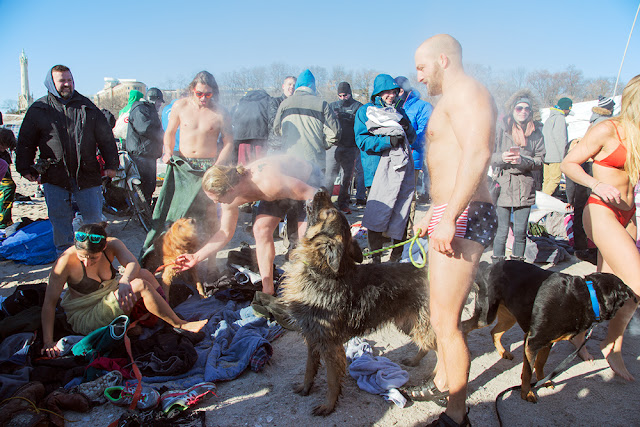 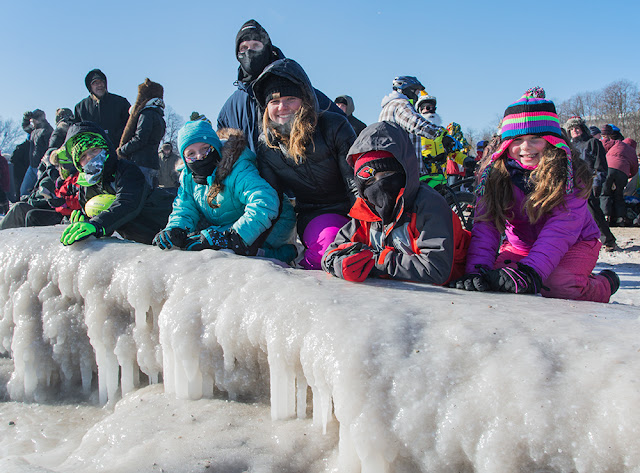 The spectators, by and large, were suitably prepared for the conditions. We do live in Wisconsin, after all. 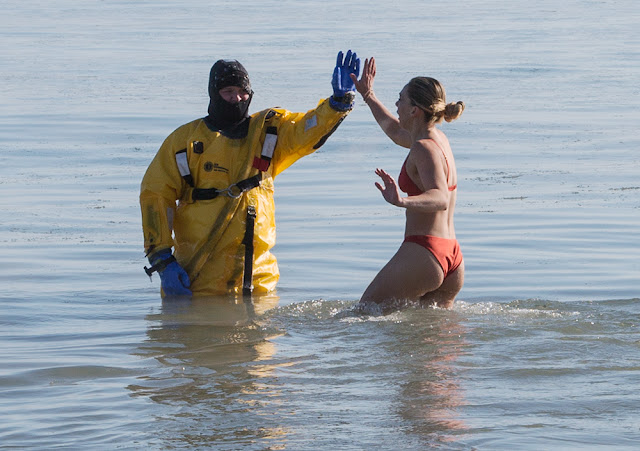 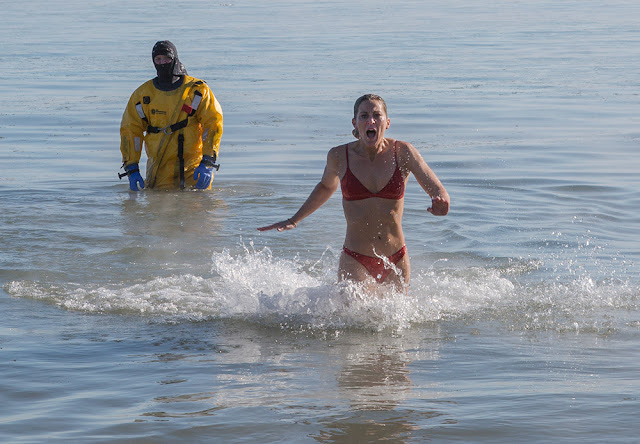 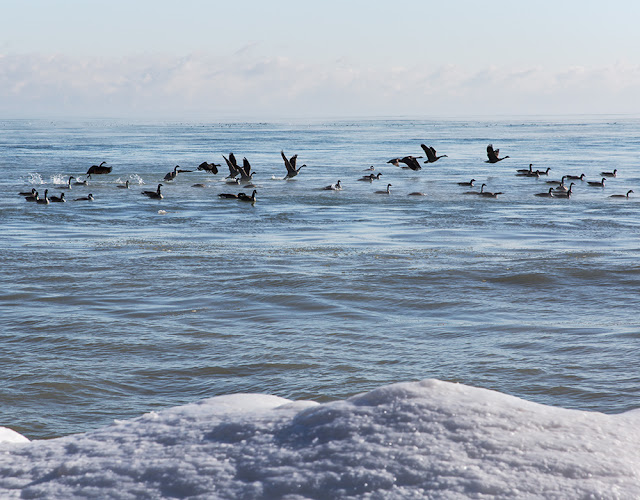 The geese that were loitering out on the lake were unperturbed by the cold or the commotion. 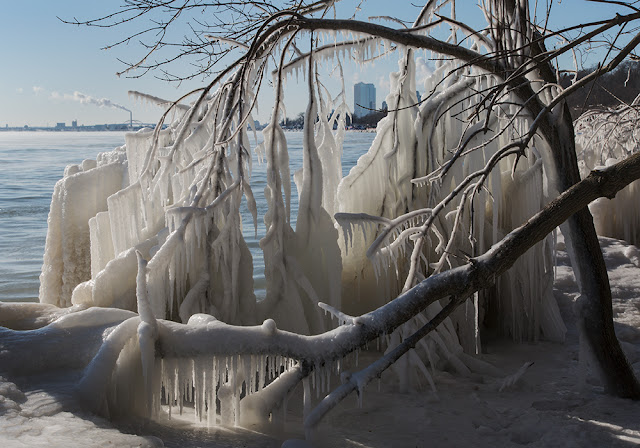 To see more photos of the polar bear plunge go to my Flickr album.