Work began in September to remove 1,100 feet of concrete channel in the Menomonee River near Miller Brewing and the Wisconsin Avenue viaduct. The purpose is to return the river to a somewhat more natural state and enable fish to more easily migrate upriver. A final section of concrete channel south of the viaduct is slated for removal later in 2014. That will complete the channel removal that began upstream at 45th Street when a small dam was removed approximately 15 years ago. Those who are familiar with my book, Urban Wilderness: Exploring a Metropolitan Watershed (published in 2008) may remember that I wrote about the promise of channel restoration at that time. Thankfully, that promise finally is being fulfilled. Here is a photo essay of the current conditions. (For a more detailed account of the project go to jsonline.)

Two years ago I wrote a post about the potholes on the Menomonee River Parkway. Since then condition of the parkway has only worsened. However, there is finally a plan--and, more important, money in the budget--not only for repaving but also for redesigning the parkway. About time! 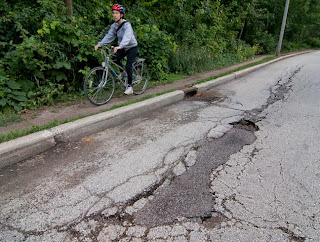 All aspects of parkway design are to be considered, including "pedestrian access, bike and pedestrian safety, traffic flow, traffic calming, and aesthetics of the parkway" as well as runoff water quality.

You can help! Please do. (Read on, or click here to go directly to the County Parks Menomonee River Renewal site.)

The parks department held a public open house last week at Mount Mary University that was very well attended--by the public as well as a variety of officials. 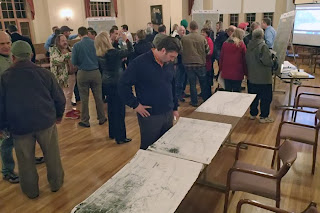 Those who attended were able to fill out a survey and leave comments and suggestions. If you missed the open house, you have until December 6 to go to the County Parks Menomonee River Renewal website and fill out their survey. Be sure to include comments.

My suggestions were these:

The Parkway ought to be considered a park and not a highway. Therefore, bicycle and pedestrian access and safety should be considered more important than the speed or convenience of vehicular traffic. (I live right next to the parkway and I drive on it daily. I'm happy to slow down for bikes and pedestrians.)

Off-road bike paths should be included along the entire length of the parkway, as already exists in Hoyt Park.

Street design should encourage drivers to slow down. (Check out the maps provided on the website and share in the horror when you learn how many accidents there have been all along the parkway.)

Except for invasive species, existing trees should be preserved. Let's not clearcut the parkway and then plant new seedlings (as we've seen done elsewhere in Wauwatosa!)

The wild sections of the parkway along the river are among my favorite places to walk. These should be preserved and not cleared or paved. They are the urban wildernesses that our children and grandchildren need be able to explore. 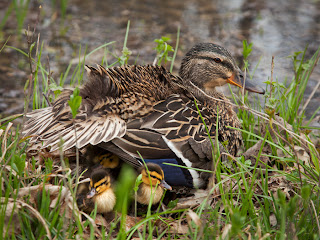 Go to Menomonee River Renewal today and make your voice heard. Let's get this right, shall we?

The Transit Center and the Public Trust

If you have been following local news lately you may have noticed a number of stories relating to a  high rise development proposal, called the Couture, for the site now occupied by the Transit Center, which is located where Michigan Ave. meets Lincoln Memorial Drive. The plan for the development has been endorsed by many in the community. However it is opposed, in its current form, by Preserve Our Parks (POP). I am on the board of POP. Our group's opposition to the current plan has generated more controversy than the plan itself. Unfortunately, POP has been criticized for our stand, which has been characterized as intractable, among other things.

If POP had not stood its ground on an earlier lakefront development scheme there would be a freeway now where Lincoln Memorial Drive is.

I invite you to read a more detailed account of POP's position. The following is a letter written by board member Bill Hibbard to the County Supervisors:

Preserve Our Parks (POP) understands that you may soon be discussing and possibly voting on the sale of the Transit Center site to a developer who wants to build the Couture, a 44-story multi-use tower on the land. POP, a local organization dedicated to saving parks and other green spaces from commercial development, strongly urges you to vote NO to this specific proposal.

Preserve Our Parks has no problem with the County selling roughly the western third of the property, for commercial development, as that parcel is not affected by the Public Trust Doctrine of the Wisconsin Constitution. Here’s the story:

*Old maps, many of them official public records, show that Lake Michigan water once covered roughly two-thirds of the site. Under Wisconsin’s Public Trust Doctrine, this means NO commercial development or private ownership of this filled lakebed land.  (The maps are on file with the Milwaukee City Engineer, County Register of Deeds and Public Land Commissioners; pertinent maps also are available at the County Historical Society, at the UWM Library’s digital collection and in commercial plat books.)
*The Legislature’s late insertion into the state budget bill – with no advance notice, public hearing or committee debate -- of a provision declaring a new, fictitious shoreline that doesn’t include the Transit Center site. This seems to POP a curious and illegal way to try to amend the Constitution. We believe the lake – not the legislature -- sets its shoreline!

*Over nearly a century of transferring Lake Michigan shoreline land to the City and County of Milwaukee, the state has specified each time that this filled lakebed be used for public purposes. And the Public Trust Doctrine reserves these lands for the use and enjoyment of the public, with no dilution or interference with the public’s rights by private development.

*If the Couture is allowed to proceed at the proposed site, it opens opportunities for development of filled lakebed land all along our Lake Michigan shoreline. And its implications could be felt across Wisconsin; similar legislation could lead to the statewide loss of waterways and wetlands to commercial development.

*No public hearings were held on best use of the site,  no bids were solicited out, it was the County Executive’s done deal with little or no outside input.

We want to emphasize that POP does not oppose the proposed Couture project; we simply object to building it on the portion of this site that’s clearly governed by the Public Trust Doctrine. POP also is not anti-development; recently the organization commissioned prominent Milwaukee architects and urban planners  Mark and Linda Keane to prepare a concept for development of the area to create a striking Grand Gateway to Milwaukee.

The plan would expand the area’s park-like qualities and make it a focal point for recreation and fun, inviting development that would add to the city’s tax base. It would ease traffic flow through a point of congestion, And by moving the Couture construction to the wesr or to nearby land that will be freed by planned relocation of freeway ramps, the 44-story tower will bring it into compliance with the Public Trust Doctrine.

Again, we strongly urge you to oppose sale of the full Transit Center site to the Couture developer.  Selling just the western third would be a win-win situation for all concerned. Thanks for your consideration