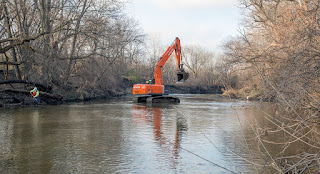 I'd been told over a year ago that a series of five "fish barriers" --aka dams of various sorts and sizes--were going to be removed this year. I've been looking forward to it ever since. With the year rapidly drawing to a close, the work is finally underway. I didn't notice what was happening until I happened to see this big excavator in the river last week. By then most of the work had been done. But I have some before and after photos of the sites to share. 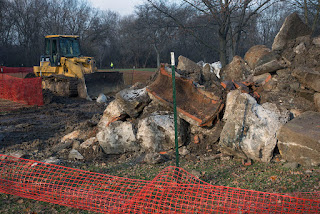 I caught up with the project as the fourth of these impediments to fish passage was being cleaned up. This one had been an abandoned sanitary sewer. Broken pieces of the pipe can be seen (above) piled up in the park for removal. 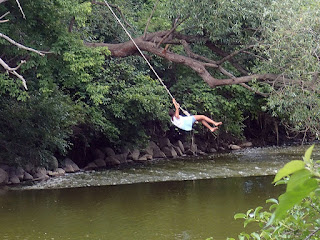 For decades, while the disused pipe was in the river, it created a short dam with a pool sufficiently deep to attract local kids. This shot (above) was taken a couple of summers ago. Unfortunately, the damming effect was also enough to inhibit the passage of fish and plans to remove all 5 have been in the works for quite a while. As a former board member of Milwaukee Riverkeeper and a nearby resident, I've long anticipated the restoration of the Menomonee. 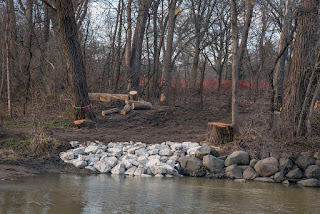 Today the dam, the pipes and the pool are all gone. Sadly, the tree from which the kids strung their rope swing was also removed to facilitate the project. 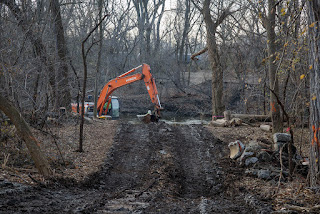 In fact a whole swath of trees were removed in order to reach the river. This site is near the intersection of Charles Hart Parkway with the Menomonee River Parkway. 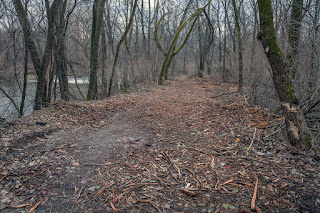 The sewer that went across the river continued on through the woods on the south side. There were at least three--what do we call them now? Manholes was how they used to be described. Anyway, there were three sticking up in the middle of the woods for no good reason. In order to remove them, though, another great swath of trees had to be obliterated. Now what was a narrow mountain biking trail looks like a broad logging road. 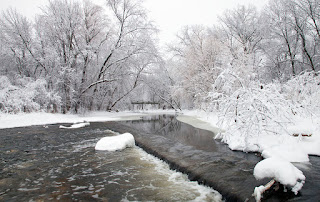 Upstream, just east of the Hoyt Park pedestrian suspension bridge was another low dam, seen here in a shot from two winters ago. The bridge is visible in the background. 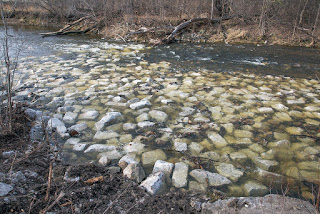 Today the site looks like this. White limestone has been strewn to create a more natural flow that fish can navigate easily. The MMSD, which is responsible for the project, informs me that the sewer line in this spot is still in place, just covered with the stones. In time it will actually look natural, too! 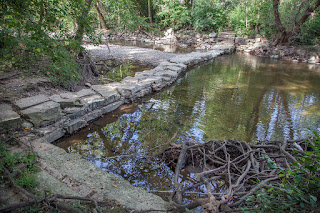 If you've ever visit Hoyt Pool or the playground next to it and walked down to the river you probably saw this. At some point in its history it was safe to walk across, presumably. It clearly was a walkway, with stairs leading down to in on both sides of the river. The fact that it looks completely dry in this photo from last year was due to extremely low water during a drought. During normal flow levels there was always a waterfall going over the top. 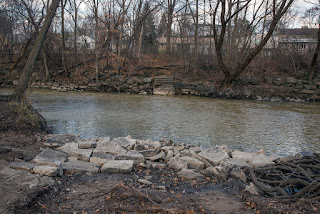 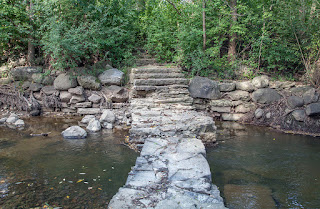 Here is another before and after comparison. Before is above, after removal is below. 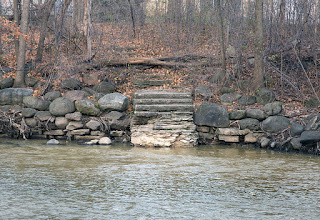 Don't ask me why they didn't remove the stairs. Seems like a safety hazard to me. But the fish can swim upstream now. 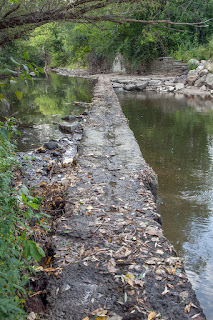 Just west, still near the playground where my two children played and now I take my granddaughter, was this prodigious dam-like sewer crossing. Again I shot it in 2014 during the drought. I'd never seen it dry before. 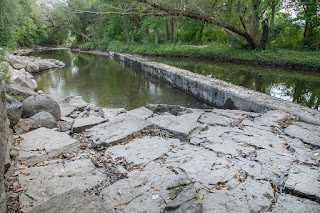 Here's the view of it from the north bank. 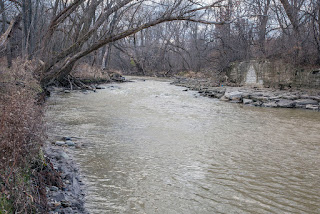 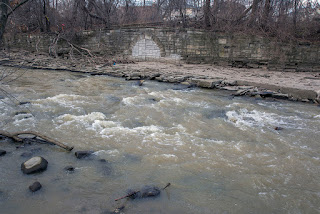 And behold! There are actual rapids where before there was a pool. 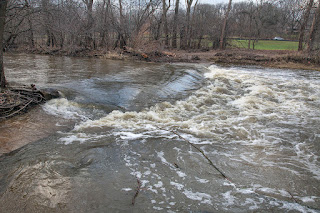 Removal of the fifth and final dam is still underway as I write this. It is the largest one. In low water conditions I could easily walk across in my sandals without getting my pants wet. This photo was taken from the south bank just a couple weeks ago after a heavy rain. 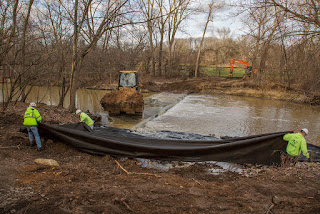 This is the same viewpoint last week as workers place fabric over limestone fill in order to stablize the badly eroded bank. 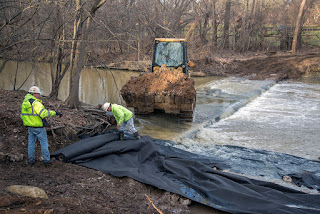 The concrete, which I've heard once carried a bridge of some sort, is wide enough for this front end loader to drive across. It's carrying a clay and topsoil mixture that will cover up the rock and the fabric lining. 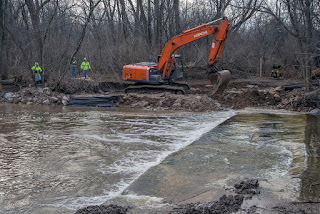 Here's the same scene viewed from the north bank a couple days later. The shovel is tamping down the earth on top of the fill.

Rain has halted the project for the moment. But before too long this last Hoyt Park fish barrier will have been removed. Then the Menomonee River will be that much closer to being swimmable and fishable, one of the goals of Milwaukee Riverkeeper. In this case, at least it will be more swimmable by the fish.