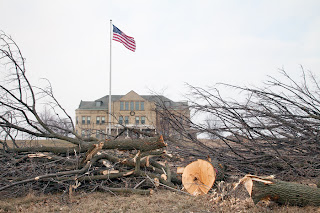 Delivered with droll humor over the phone, that was one of the multitude of responses I have received since I posted my previous story about the tree removal on the County Grounds. Many of the replies have been far more strident. What is most clear from the outpouring of grief and anger over this incident is that a great many people, both near and far, care very deeply about the fate of the County Grounds.

Here is a more typical response, from Gail, a Wauwatosa resident: “I am so heart broken – as I know so many other people are too. Please keep all of us, who have fought long and hard for this plot of land, in your thoughts as we go through the long painful process of mourning during the construction process….  To some of us this is where we go for spiritual uplifts….”

I am grateful, not only for the attention that this issue has received, but especially for the concern expressed by so many. I think that it is important to note that the concern goes beyond tree-hugging to encompass larger issues of land use, appropriate development for this unique site, and transparency as development proceeds.

As County Supervisor James “Luigi” Schmitt put it, “After it’s done, it’s done.” If there is a silver lining in this for those of us who reacted with shock and dismay it is that, while many trees have come down, the development of Innovation Park is far from done. This is the beginning. Still on the agenda is the upcoming and highly controversial decision about preserving vs. demolishing the Eschweiler buildings.

Accounts in the media also have evolved as concern has widened. Several of you sent me the link to the Fox 6 News spot (about the cold that the contractors had to endure to cut down those trees) that was posted on Monday, adding comments like “unbelievable.” You will be happy to learn that I was interviewed last night by a news team from CBS 58. The far more reflective piece they produced, which aired at 10 pm last night, is posted online.

Its president, David Gilbert, represented the position of the UWM Real Estate Foundation, which is responsible for the development. No one who has followed this issue closely will be surprised by the rationale he expressed. Yes, the DOT forced some of the choices. Yes, there has been a commitment to preserve an 11-acre habitat for wildlife. And yes, I definitely favor planting native tree species to replace those that were, as a story in WauwatosaNOW put it, “mown down.”

A few of those trees were diseased; some of them were considered “weed trees.” But, while new trees can and should be planted, the hundred-year-old ones of any species (some were venerable and hardy) will not be “replaced” in our lifetimes.

One more significant clarification should be made: while the Friends of the Monarch Trail, among others, are grateful for the commitments made to preserve the 11-acre habitat zone, those 11 acres were not identified in isolation. The agreement by Milwaukee County at the time of the sale of the land to the Real Estate Foundation and adopted by the City of Wauwatosa included a Habitat Restoration Landscape Plan for the Northeast Quadrant. This plan contains guidelines for the entire Northeast Quadrant of the County Grounds, including Innovation Park. Among its goals is to provide a consistent character throughout the Northeast Quadrant and to utilize existing topography and natural resource features. (Emphasis mine.)

As County Supervisor Deanna Alexander put it to me in an email, “It was my understanding that some land would be cleared for development, but that most of the aesthetics of the area would be preserved….” 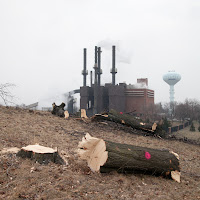 Notwithstanding my own photographs, this issue isn’t primarily about trees. It is about how we envision our community and whether or not we choose to integrate what we build with the natural environment. The County Grounds has been called the “most valuable real estate in Milwaukee County.” Why? Not because of its potential for development, but because of the location and its existing natural features, including magnificent views. The past few days have proved that many in our community envision something truly innovative on the County Grounds: development that is valued because it respects the natural features and the interests of the public.

The plan that made the UWM Real Estate Foundation, with its relationship to the university itself, the steward of the development zone was a compromise. I am among those who saw this as preferable to IKEA and a swath of condominiums, which were options being considered. I won’t say that the Real Estate Foundation has broken its promises, but it is obvious that skepticism has been generated.

The responses to what happened over the weekend have ranged from anguish to incredulity and raised many questions. I can’t answer them all. Here is one that I can answer: Jim Toth, in a comment on the blog, asked, “What will become of the "harvested" wood? There is probably hundreds of feet of furniture-grade lumber in those old trunks. Is it all destined for the chipper?”

Again, thank you to all for your concern, and in particular to several of the County Supervisors who took the time to reply. I encourage you once again to contact the following and to let them know about your concern. Venting is healthy; communication is healing.