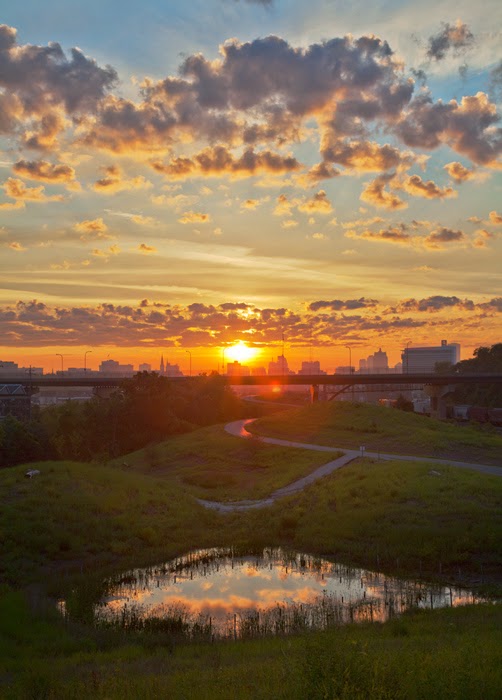 I made this shot early in the morning last Saturday (the sun rose at 5:19 and it was a few minutes after that, to be exact.) It became quite popular after I posted it on facebook so I thought I'd repost it here for anyone who may have missed it there.

I thought I knew where I wanted to be at sunrise, which was next to the bridge crossing over from 3 Bridges Park to Mitchell Park. But when I got there and the sun peeked up over the skyline (at 5:19) I was disappointed. The foreground was uninteresting and the sky above the distant band of clouds was clear. It's hard to plan a good sunrise, I thought. Bit of a crap shoot. So I started walking back through the park. It was just as I reached the hill overlooking the pond that the closer band of clouds blew in overhead and reflected off the surface of the water.


This post is one in a series that relates to my Menomonee Valley Artist in Residency. For more information about the residency and links to previous posts and photographs, go to MV AiR.
Posted by eddee at 5:12 PM