Saving the last wetland in Milwaukee's estuary: the Grand Trunk

How important are a meager six acres of wetland surrounded by industrial and commercial developments just off the Kinnickinnic River near the port of Milwaukee? As the last remaining wetland in an estuary where wild rice marshes once covered the entire confluence of Milwaukee's three rivers and several miles into the Menomonee Valley, I believe they are important enough to save and protect. A couple years ago I wrote about this site, known as the Grand Trunk after the railroad company which ran its tracks nearby. I am reprising that story below.

This is topical, though, because there is an opportunity to make your voice heard on this issue at an upcoming public hearing. Here are the details:

You can see an aerial view of the Grand Trunk site by clicking here.

The following story was originally posted in October, 2011.


Seiche: Symbolism and reality in an unlikely urban wilderness

In the midst of active rail lines and towering industrial buildings, I find the activity of beavers most mysterious. Discovering the little haven of nature in a place so completely altered by humans is itself unexpected. The presence of a beaver, an animal also driven to modify its environment, seems miraculous and symbolic. 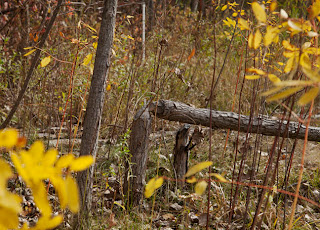 Against long odds, a wetland remains within the historic estuary of the Milwaukee River.

Milwaukee’s estuary, with its vast wild rice marshes, once was one of the greatest treasures in the entire great lakes basin. First it drew myriad Indian tribes, who prospered from its abundance. Later it drew European settlers who, to make a long story short, cleared the wilderness, filled the wetlands, paved over the earth – and transformed it into “the machine shop of the world.”

Today the estuary is reduced to the confluence of the city’s three rivers, their banks lined with concrete and steel. But, accompanied by Megan O’Shea of the Wisconsin DNR, I set out to explore a tiny unnamed wetland in this unlikely setting. 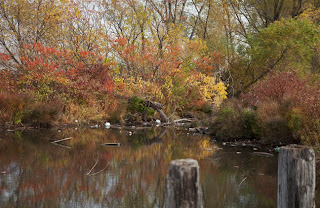 Starting at Skipper Bud’s Marina on the Kinnickinnic River, we follow an uninviting ditch strewn with trash. There are plans to clean and rehabilitate it. In theory, aside from providing drainage the ditch should be hydrologically dynamic. Surprisingly, inland bodies of water as large as Lake Michigan can have something like a tide. It is called seiche. Storm fronts, high winds, and variations in air pressure can cause water levels to fluctuate from one side of the lake to the other, like water sloshing in a tub.

During a seiche event, high lake water can flow into the wetland bringing aquatic life with it as high tide does in a salt marsh. 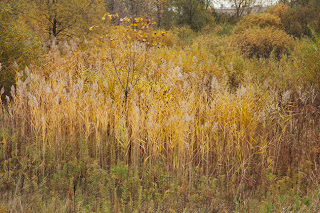 It takes only a minute or two to reach the heart of the miniscule marsh from South Marina Drive. Atop a large berm we look down on a patch of cattails nearly overwhelmed by tall non-native reeds called Phragmites. Attractive but aggressively invasive, these will have to be eradicated.

We walk along a weed-choked dirt track to reach the far end of the mostly dry 6.5-acre site. A healthy wetland is more than a place that’s wet. Fortunately for this site, size is not a crucial factor. Three things are needed: the right soils, plants, and hydrology – or flow of water. Surrounding uplands add complexity and vitality to the ecosystem, which increases biodiversity. 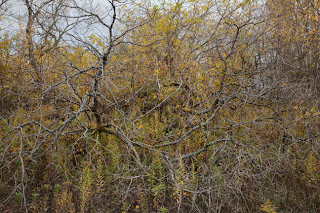 Bushwhacking through tangled undergrowth, we are suddenly, marvelously immersed in nature. Even here, where surrounding industrial buildings, boxcars, or dry-docked boats are rarely out of sight, the variety of colorful plants in slightly faded autumn splendor is a revelation. We skirt an impenetrable stand of sandbar willows. Poplar leaves quiver in the breeze, by turns silvery and golden.

The wind dies as we enter a slough. All evidence of the surrounding city disappears. After a rainfall the wetland drains through here into the ditch. We see the telltale trees, gnawed and toppled. The teeth marks are gray with age and some of the neatly coned stumps have long since resprouted. Among the many incongruities of our diminutive wetland this evidence of beavers is the most compelling. I imagine a beaver swimming down the Milwaukee River. First the intrepid creature has to leave its comfortable habitat, probably near the headwaters where the river is relatively wild and protected by Kettle Moraine State Park. Before long it reaches farmland where cow pastures occasionally denude the riverbanks. Then for most of its long journey it paddles past suburban homes perched on lawns to enjoy riverfront views.

Our big-toothed, flat-tailed protagonist would have to portage past – or slip over – at least a couple dams; avoid piers, boaters, fishermen. When at last it reaches downtown Milwaukee it is confronted by a canyon of condominiums and industries, with their bulwarks of concrete walls.

The beaver perseveres. It threads its way through the hardened confines of the constrained river; past barges, motorboats, bridges; until it reaches the narrow, polluted outlet of the only wetland left in the estuary. What instinct drives it to this apparently desperate end? 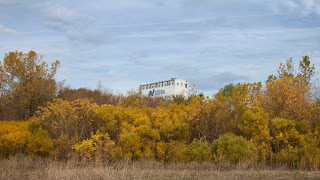 The question reverberates as we emerge from the copse to see a flat, vacant brownfield, dotted with mounds of asphalt and gravel. Even this harsh landscape sprouts new mosses, grasses, and trees. Nature is persistent. The brownfield would double the size of the preserve. Sadly, it isn’t included on the planning map.

Why should we care? Why restore such a meager wetland, so long neglected and circumscribed by blight? In a few hours time a bulldozer could erase the last wetland, flatten its gentle contours, prepare it for pavement. Centuries of progress have led us, like the beaver, to this desperate end. 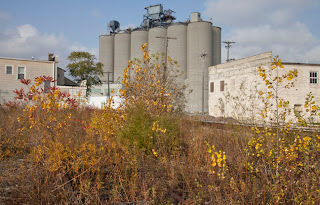 This unlikely place is precisely where we need a refuge. Yes, we can replenish a habitat for the fish, birds, and other creatures that require it to thrive, but our own salvation is no less at stake, inextricably bound as it is to theirs. We humans are drawn to nature, to water and the soft edges of the land, as surely as the beaver.

We are at a moment, if not a turning of the tide then at least a high water mark – a seiche – when the effects of our own pressure on the earth are swamping outdated and unsustainable impulses. Like beavers, we have the power to shape our environment. We can push it around with bulldozers but we cannot conquer nature. How we shape it will determine if we thrive or perish. 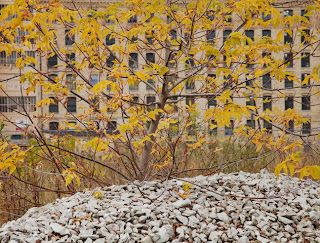 It is time to become reacquainted with nature. There is no better place to begin than here in the ravaged estuary of the Milwaukee River. This seemingly insignificant wetland at the edge of civilization is what we have left to work with. We must not merely protect it; we must make the most of it.
Posted by eddee at 9:09 AM