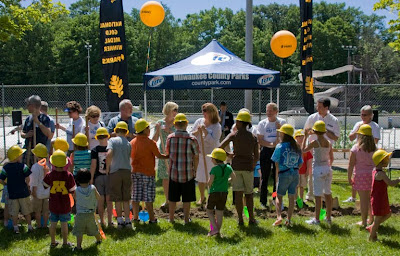 If you didn't know that there was going to be a groundbreaking ceremony on Saturday for the new pool at Hoyt Park in Wauwatosa, I'm not surprised. I live across the street and stumbled upon it by chance when I went for a walk. (Why wasn't it better publicized? I'm not exactly oblivious to things going on in the parks!)

What I stumbled upon was a large assembly of political and parks officials and other dignitaries from the City of Tosa, Milwaukee County, all the way up to State Senator Jim Sullivan, many of whom are pictured above with shovels. Mayor Didier was there, County Exec. Walker, Parks Director Sue Black. The children were invited to join in the groundbreaking, as you can see. Denise Lindberg, lead instigator with the Friends of Hoyt Pool, thanked the kids for getting the fundrasing off to a start. She also thanked John and Tashia Morgridge, who were present, and their Tosa Foundation for the crucial $4 million challenge grant that made it all happen.

The old pool was the largest in the state (some say the country; some claim the world) when it was built in 1939. It had been leaking for years when it was closed in 2003. In Walker's speech he said the new pool will be "updated for the twenty first century," and - as several speakers pointed out emphatically - will be heated. That remark resonated with anyone, including me, who had spent time in the always frigid water of the old pool. While it won't be the biggest anymore, it will combine some of the features of modern water parks with traditional pool lap lanes. The renovated bathhouse is to include a restaurant, among other amenities.

In his speech, John Morgridge said that one of his motivations for the donation was to give children a reason to get outside and away from the computers and TVs. Yes! Here at Urban Wilderness I am especially grateful for that sentiment - and commitment.

Presumably, the pool opening, scheduled for Memorial Day 2011, will be more prominently publicized. If it's a nice day, I predict a mob scene. I'll be there!

To learn more, go to Friends of Hoyt Park & Pool.
To see a photo essay click on Wauwatosa NOW. 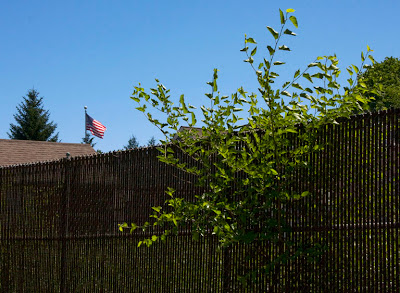 A tree bursts through the fence, a metaphor to represent new life for the pool.
Posted by eddee at 8:03 PM