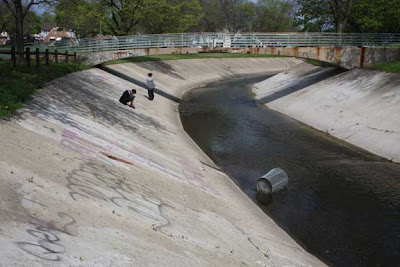 Not long ago the KK River, as it is called locally, was designated one of the ten most endangered rivers in the country. Not long after that federal money became available allowing for the beginning of was is hoped will be long-term improvements, which was the main point of the designation.

There was a nice story in the Milwaukee Journal Sentinel last week about a major improvement project that is underway by the Milwaukee Metropolitan Sewerage District. Check it out at "Kinnickinnic River Reclaims Banks."

If you want another analysis of the project, including a map, go to Great Lakes Water Institute.

For more of my images of the KK, go to my flickr page.
Posted by eddee at 5:44 AM