Shortly after I posted my last post about concrete removal on the KK river (see below) I read very similar news this morning about the Menomonee River. (Read it at Menomonee River concrete removal....) I've been hoping for this ever since 1997, which is when the "drop structure," a.k.a. dam, at 45th street was removed, along with a long stretch of concrete channel. I wrote about this in my book, Urban Wilderness: Exploring a Metropolitan Watershed, in a chapter I called "Concrete Creeks." I'm delighted that it now needs updating. Here are just three selections of photographs from that book. 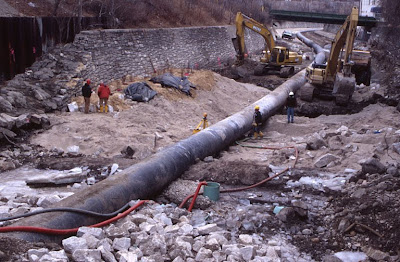 This image shows the concrete removal underway. The entire flow of the Menomonee River had to be contained in the pipe for the duration of the project, which was done in February because that is a time of low flow.

This image (right) shows what the channel looked like following the removal of the channel. It looks pretty much the same today, with a bit more vegetation grown in. As stated in the Journal Sentinel article, the rocks allow for shelter where fish can rest in their swim upstream against the current.
The image below shows salmon struggling vainly to make headway against the current in the concrete channel. This is the problem and removal of this last steep stretch of concrete is supposed to enable fish to swim more freely from Lake Michigan upstream into Wauwatosa. Perhaps, one day, the few remaining drop structures in Wauwatosa will be removed as well, which would further improve migration. 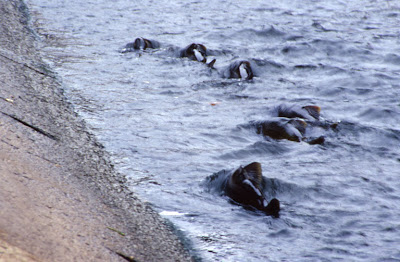