Winona LaDuke on living on the earth

“How can something as immortal and huge as a mountain be named after something as small as a man?” Winona LaDuke’s dry delivery of that question provoked laughter in an audience willing to be challenged. LaDuke, speaking at the General Assembly of the Unitarian Universalist Association in Minneapolis, challenged her audience several times with similar and even more provocative comments. Naming is an assertion of power and the renaming of the landscape an act of conquest. The original names for mountains and rivers in indigenous languages have a different kind of power—spiritual power. LaDuke also questioned “this whole discovery thing” as a myth. “The last time I checked, we already knew we were here,” she said, referring to her people and the other Native American tribes. Her knack for humor made palatable a series of pronouncements—mostly about our relationship with the environment—that could easily make an audience like hers uncomfortable.

If you want a clear and incisive perspective on an American culture that is rapidly becoming a global world culture, just spend some time listening to an Indian.

Winona LaDuke is an Anishinaabekwe (Ojibwe) who lives and works on the White Earth Reservation in Northern Minnesota where she runs a Native Harvest organic food cooperative. She is also the Executive Director of Honor the Earth, a non-profit organization that works to build a just, green economy in Native America. She has an impressive biography, which you can read on her website.

Here are some of my notes from her talk.

We’re all very good at “talking about talking about” things, she said, referring both to her audience and her Indian people. “At some point you have to get something done!”

There is no such thing as “clean coal.” We have to stop destructive practices such as mountaintop removal and begin to substitute clean alternatives to coal such as wind turbines. “It turns out that Indian lands are among the windiest places around.” But power companies have been reluctant to extend the infrastructure needed to connect Indian lands to the grid.

We need to wean ourselves from food grown in distant places. “Why do we in Minnesota need those kiwis anyway?” Not only should we “buy local” but better yet, everyone should grow their own food. All those lawns—a holdover from the British Empire—what good are they? “Grow something.”

Don’t “reboot the nuclear industry.” This one drew a more tepid response than most of her exhortations. I wonder if the house was divided on it. The global warming argument has given nuclear proponents new hope.

And, of course, there’s oil. The dominant culture—the American Empire—is “addicted to oil.” And “you all know about addicts … they will do bad shit and hang around with dealers.” There was no need to evoke images of the gulf oil spill, so ubiquitous in the media. Instead she described in some detail a less familiar example of deliberate (not accidental) destruction on a similar scale: the tar sands of Canada, where vast boreal forests are being leveled and entire ecosystems contaminated with toxic chemicals. “Eighty percent of Minnesota’s oil comes from the tar sands. This has to stop.” 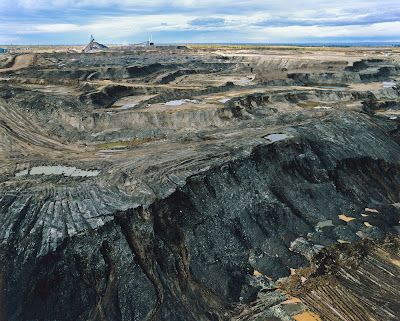 The bottom line, she insisted, is to think not in terms of quarterly profits, and not only of your grandchildren’s future, but your grandchildren’s grandchildren. A woman of modest physical stature, she spoke with a powerful presence. The audience responded with a standing ovation and waited in long lines to purchase signed copies of her books with titles like Last Standing Woman, Make a Beautiful Way, and Recovering the Sacred.

Winona LaDuke's unedited lecture can be seen and heard on the UUA website.
Posted by eddee at 11:30 AM